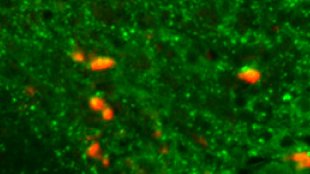 Alpha-synuclein aggregates (red) in the mouse brain.Kelvin LukAggregates of misfolded α-synuclein proteins are not just hallmarks of Parkinson’s disease, they actually initiate pathology, according to a report out today (November 15) in Science. A single injection of the aggregated proteins, known as Lewy bodies, into the brains of healthy mice caused the propagation of such aggregates across networks of brain cells as well as the destruction of dopaminergic neurons, a key feature of Parkinson’s disease.

“There had been this [question] with the Lewy bodies as to whether they were sort of tomb-stone evidence of the disease occurring, or were more involved in the process,” said Gary Miller, a professor of neurology at Emory University in Atlanta, Georgia, who was not involved in the study. “What this shows is that they are clearly part of the process.”

Parkinson’s disease is one of a number of neurodegenerative conditions, including...

In addition to the presence of Lewy bodies, the death of dopaminergic neurons in a part of the brain called the substantia nigra is a major feature of Parkinson’s. Indeed, it is this cell loss that causes the characteristic tremors, rigidity, and movement difficulties associated with the disease. But it wasn’t entirely clear how the death of dopamine neurons and the presence of Lewy bodies were connected, explained Virginia Lee, director of the Center for Neurodegenerative Disease Research at the University of Pennsylvania in Philadelphia. The goal, “was to somehow connect the dots to see whether we could provide a direct link between the [Lewy body] pathology and the dopaminergic cell loss,” she said. “And in a nutshell, we were successful.”

Lee’s team injected aggregates of misfolded α-synuclein protein into a region of the brain called the striatum—chosen because it directly connects to dopaminergic neurons in the substantia nigra, she explained. Dissection and observation of the brains 30, 90, and 180 days later revealed a time-dependent spread of Lewy bodies into the substantia nigra and other connected brain regions, and an accompanying time-dependent loss of dopaminergic neurons. The mice also displayed progressive deterioration in certain motor functions.

“One of the interesting aspects of this study is that they showed it happens in wild-type mice,” said Timothy Greenamyre, director of the Pittsburgh Institute for Neurodegenerative Diseases in Pennsylvania. “There was some conjecture that this process of α-synuclein aggregation and transmission may depend on an aberrant template—an α-synuclein mutation, for example—and that’s clearly not the case,” he said.

The fact that misfolding and aggregating an otherwise normal protein can invoke Parkinson’s disease pathology and deterioration of motor function in healthy mice might be a cause for concern, said Michel Goedert, a neurobiologist at the Medical Research Council Laboratory of Molecular Biology in Cambridge, UK. “The question is, how similar is this phenomenon to what you get in prion diseases?” he said. Prions are known to transmit from person-to-person, albeit rarely and by unconventional routes. If misfolded α-synuclein somehow made it from one person to another, could it also cause disease? There is no evidence to suggest Parkinson’s disease can be similarly transmitted, Goedert said, but “it’s something in the long run that needs addressing.”

Regardless of the degree to which α-synuclein acts like a prion, the finding that its aggregates propagate from neuron to neuron should help researchers work out the cellular mechanisms of disease progression, said Goedert—and more importantly, learn how to stop it.