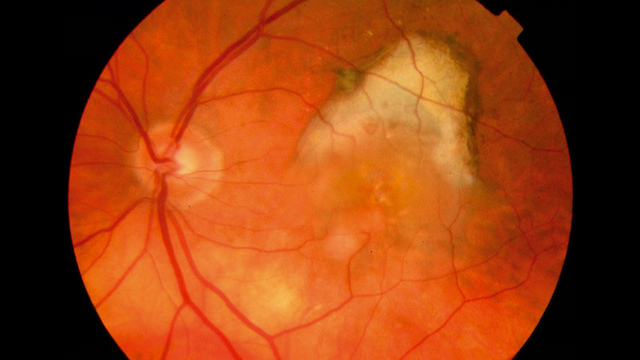 An eye with wet age-related macular degenerationFLICKR, COMMUNITY EYE HEALTHWet age-related macular degeneration (AMD) occurs when blood vessels grow and leak fluid into the macula, the central portion of the retina. If left untreated, this condition can lead to vision loss. A new gene therapy that blocks vascular endothelial growth factor (VEGF), a protein that plays a central role in the development of the disease, may be a safe treatment, according to a study published yesterday (May 16) in the Lancet.

Researchers at Johns Hopkins and their collaborators conducted an open-label phase I clinical trial of a new treatment, in which a viral vector expressing the gene for sFLT01, a protein that neutralizes VEGF, is injected into patients’ eyes. The team enrolled 19 patients over age 50 with advanced wet AMD and divided subjects into five groups that received different doses of the gene.

In five patients where the treatment did not reduce fluid levels, researchers discovered pre-existing antibodies to the virus used to deliver the therapy, adeno-associated virus (AAV2). “Looking towards the future, the possibility of pre-existing neutralising antibodies to AAV2 being an obstacle to the success of the therapy could be partially overcome by prescreening the patients or by the selection of alternative AAV serotypes,” Elizabeth Rakoczy of the University of Western Australia who was not involved in the study, wrote in an accompanying comment in the Lancet.

Another newly developed approach to treating AMD has been to implant retinal epithelium derived from induced pluripotent stem cells. The first patient to have received such a treatment, made from donor stem cells, did not have worsening vision one year later.