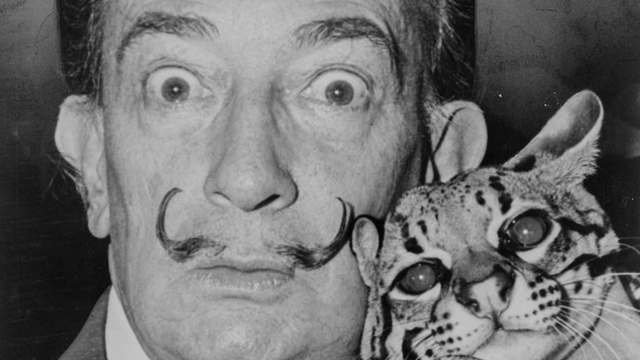 Lluís Peñuelas, the secretary general of the Gala-Dalí Foundation, says the artist’s mustache retained “its classic 10-past-10 position,” like the hands of a clock stretched out, The New York Times reports. Dalí’s embalmer called it “a miracle.”

But to forensic scientists who deal with corpses on a regular basis, the tenacity of dead people’s hair is anything but miraculous.

“For human remains that are placed in airtight conditions such as coffins or crypts, it is entirely possible for hair to preserve over very long periods of time,” says anthropologist Tiffany Saul in an email to The Scientist. Saul recently earned her doctorate from the University of Tennessee studying isotope values in human hair following decomposition. Even after exposure to outdoor elements,...

Officials disrupted the surrealist painter’s crypt beneath the Dalí Museum Theater to retrieve samples of nails, hair, and bone, reports the Associated Press. The tissues will be analyzed to satisfy paternity claims brought by a woman who alleges that Dalí had an affair with her mother. He was buried in the museum following his death in 1989 at age 84.

“It is quite likely that [Dalí’s] mustache remains intact,” agrees forensic scientist and crime scene investigator George Schiro, lab director of Scales Biological Laboratory Inc, a private DNA testing facility. He describes a body he had exhumed back in 1991 that had been buried for 56 years. The individual’s hair, Schiro recalls, was completely preserved.

“Hair is primarily made up of a protein called keratin,” says Saul, which is durable and can withstand digestive enzymes. “[I]t has proven to be very robust over time and is frequently recovered with both modern forensic cases, as well as at archaeology sites.”

According to Saul, hair samples have even been recovered from remains dating back thousands of years. In the case of Ötzi, a 5,300-year-old frozen corpse, scientists were able to perform isotope analysis on his preserved hair to learn about his diet.

While resilient, hair can decompose. The main culprit behind its demise, Saul says, is fungus. “If the conditions are not optimal for fungal growth, for example, if it is too hot or too cold . . . the hair is more likely to preserve for longer periods of time.” The rate of hair decay would depend on what the body is exposed to, adds Reena Roy, professor of forensic science at Pennsylvania State University, stressing that there is no definite answer.

While the striking appearance of Dalí’s corpse may be readily explained, one big mystery remains. As Roy points out, the pristine condition of Dalí’s hair “really has nothing to do with DNA analysis, which is what they are doing to establish paternity.”