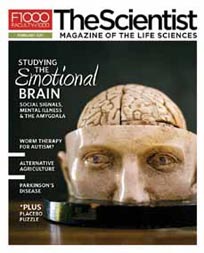 Re: Bob Grant’s article about worm therapy for autoimmune disease:[1. Bob Grant, “Opening a Can of Worms,” The Scientist, 25:42-47, February 2011.] A minireview by Hanada et al., (Biol Chem, 391:1365-70, 2010) of the RANKL/RANK system involving T-cell membrane protein ligands and ligand targets in various tissues, including specific neural and astroglial terrains in the brain, may provide additional support to the findings that inflammatory responses could play a role in autism.


Agriculture in the Future

Re: Your article about sustainable farming:[2. Vanessa Schipani, “Alternative Agriculture,” The Scientist, 25:60-62, February 2011.] In South Africa, where the free market adoption of genetically modified (GM) maize has risen to about 80 percent of the total hectarage grown, and even more for cotton, the crops were adopted enthusiastically precisely because they gave better yields, benefitting both the farmer and the...

The folks who obsess about vaccines causing harm and about GM food and products being harmful in some way don’t live in the developing world, where vaccines protect against diseases that kill and GM products benefit poor farmers—and their customers.

Full disclosure: I have never received a cent from Monsanto. But I have helped make GM maize.

We will always have luddites so long as they can complain with their mouth full.

I am an 84-year-old agriculturist. I grew up on farm in Minnesota that would have been pleased with a yield of 50 bushels of corn per acre; now it is 200 per acre. Wheat yields have tripled, potato yields have tripled, and rice yields have doubled in my lifetime due in large part to technology. Fifty years ago, my father suffered ridicule because he used fertilizer, artificial insemination and other technologies of the time. We will always have luddites so long as they can complain with their mouth full. If we were producing food at the level of only 50 years ago we would now be starving. The world has less than 40 days of food reserves. We don’t need to, nor can we afford to, pay any note of those who want to go back. I have been there and it is much better now.

I cringed multiple times when reading John Day’s online opinion piece.[3. John Day, “When the wells run dry,” The Scientist News, February 16, 2011.] If public science research funding gets to the point where only applied science is funded, society itself will be greatly imperiled. It is basic science that fuels innovation in all fields and has done so for centuries. Basic science is the foundation for all applied science—without it, there is no applied science.

Even in the face of mounting energy and resource prices, society should never sacrifice the search for basic truths, which have the greatest power to discover principles that can ultimately develop technologies to overcome those energy/resource constraints.

Data Standards
Re: your Critic at Large article about data standards:[4. H. Steven Wiley, “At the Tipping Point,” The Scientist, 25:28, February 2011.] Replace cell with brain and the different cellular measurement approaches with the ever-expanding range of structural and functional neuroimaging techniques led by MRI/fMRI and we find another field struggling with exactly the same problem of data volume and standards. Unfortunately we are even further behind the biologists in dealing with it, but right there with them in exploding the amount of data being generated daily.

Thank you for this excellent piece highlighting a defining problem of modern science that we all ignore to our peril. At some point our funding sources may reasonably ask why we are generating all of this data if we won’t share it all and don’t know what to do with much of it.

NCBI has done such a fine job of growing GenBank to meet the needs of the scientific community that it is easy to imagine that it will always be able to do so. But, with the coming data explosion and the present federal budget problems, that might not necessarily be the case in the future. If biology is truly at a data-driven tipping point, we must all be concerned that GenBank, EMBL, and DDBJ are able to keep up.

The bright future envisioned by Wiley, where ready access to huge collections of shared data will revolutionize biology, will not happen if the databases cannot grow as fast as the data. Concerned biologists should be aware that, without adequate funding for our information infrastructure, the tipping point will create severe problems. A top priority for NIH, NLM, and NSF must be adequate support for the nation’s scientific infrastructure. Without it, the superstructure itself might collapse.

As participants in the MIBBI project, the BioSharing initiative, and the ISA project, we obviously strongly support the use of standards in reporting scientific research and are working to make that process as straightforward and painless as possible.

We see a change coming in the nature of publications: the “‘real” publication will be a body of (accessible) work: data in a repository and a paper which describes, analyzes and contextualizes—all subject to inspection.

In his article, Steven Wiley highlights the vast potential for re-use of data. We need to ensure that those sharing data don’t feel like they gave away the family silver (by tracking re-use to ensure accreditation).

The missing piece is credit. Unless shared data sets are properly valued by faculties and funders, and their re-use counted to the benefit of the originator (encouraging data generators to do the best job of annotating and structuring to avoid limiting the impact and reach of their data), data sharing will continue to be contentious rather than commonplace, despite the best efforts of MIBBI, BioSharing, the ISA project and the many other groups involved.

We want to hear from you. Please e-mail your comments, criticisms, or differing viewpoints to mail@the-scientist.com.

Corrections: In “Jaume and the Giant Genome” Jaume Pellicer’s home village is correctly described as on the Mediterranean coast of Spain instead of in the Iberian Mountains. In “Opening a Can of Worms” all mentions of “irritable bowl syndrome” should say “inflammatory bowl diseases.” In the February table of contents, an Editor’s Choice article describing viral escape from membrane vacuoles should have stated that it was bacteria that escaped. The Scientist regrets these errors.