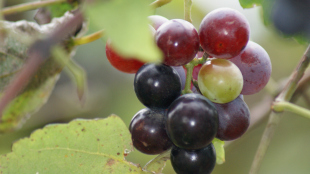 WIKIMEDIA, EZHUTTUKARITannins are polyphenols produced by plants, valuable to their hosts for fending off herbivores, pathogens, and UV radiation, and valuable to humans for helping wine age. Recently, a group of European researchers scrutinized a variety of plant types to find the source of tannin manufacturing in cells and identified an entirely new organelle, which they called the tannosome. “We were very happy because nobody knew exactly where the tannin occurred,” Charles Romieu, one of the co-authors of the study and a researcher at Montpellier SupAgro in France, told Scientific American. “It was really a mystery.”

Romieu and his colleagues describe in the Annals of Botony this month (September 11) tannosomes as small structures that originate within chloroplasts. Thylakoids inside the chloroplast swell, leading to a “a whirling of thylakoids upon themselves,” as the authors put it in their paper. The thylakoids, which are often depicted as stacked,...

“People have been trying to figure this out since the 1960s,” Ian Burbulis, a researcher in biochemistry and molecular genetics at the University of Virginia’s School of Medicine, told Scientific American. “By understanding the molecular mechanism, we can engineer systems that direct payloads within different compartments of the cell, which could be used in anything from biofuels to changing the content of wine.”