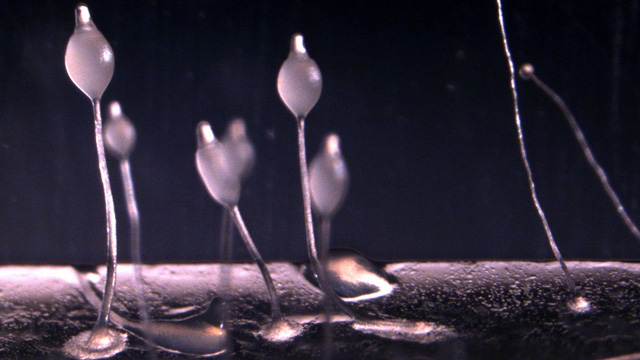 lthough agriculture is often touted as a pivotal human invention, it is not unique to us. It turns out that even slime molds with a penchant for sociality can farm. For Dustin Rubenstein, an evolutionary ecologist at Columbia University, this unexpected finding points to an evolutionary link between the ability to cultivate food and the development of complex social behavior (Nature, 469:393-96, 2011).

The Scientist: In which species, besides humans, do we see agriculture?

Dustin Rubenstein: We see it in a variety of organisms, most commonly in insects. Ants are the most well-known species outside of humans. But there are also beetles that farm their own food, and there are various subtypes of agriculture in some species of fishes. It’s certainly not widespread in the animal kingdom, but it’s more common than just in humans.

DR: When you look at where agriculture has been found, again, it has been found in insects and in some vertebrates. Here you’ve got this group of slime molds, or social amoebas, that is ancestral to fungi and vertebrates. It’s way out there in the evolutionary tree. So the fact that we find agriculture in such a basal group of organisms is quite interesting. Until this paper came out, I don’t think anyone would have thought we would see farming in amoebas.

TS: What exactly do these slime molds farm?

DR: Slime molds feed on bacteria. They inhabit a local area and eat all the bacteria. When they eat it all down, they cooperate to form a fruiting body that then sends spores off so they can repopulate new areas and find new food. What the authors of this paper discovered was that some of the individuals in this population actually carry bacteria with them [on spores]. And it looks like they will use the bacteria that they carry to inoculate a new area where they land. If the slime molds were to land in an area that didn’t have any bacteria, then they would die. It’s sort of an insurance mechanism. They take it with them, so when they move they definitely have food.

TS: It seems that in any given slime mold population, only about a third of individuals are farmers, suggesting that while there are benefits to farming, there are also some costs that keep all individuals from employing the strategy.

DR: Slime molds that have the bacteria move more slowly, and if they land in an area that does have good bacteria, then the ones that carry their own bacteria don’t do as well as the ones without them. What’s interesting, too, is that they farm multiple species of bacteria; they don’t just farm a single one. So a lot of the farmers will specialize in a single species of bacteria and then they’ll coevolve together. But because they can feed on multiple species and some are better than others, it doesn’t always pay to farm.

TS: Do the bacteria derive some kind of benefit from being picked up and dispersed to other places?

DR: That could be. It could be a way for bacteria to move long distances. If they’re going to be spread and then be eaten, then it’s not beneficial. But since the slime molds don’t seem to eat it all, the bacteria will persist for long periods of time. So it could be a mutualism that’s benefiting both slime molds and the bacteria.

TS: This amoeba species is well known for its social behavior. How does this finding change what we know about its social life?

DR: If you think about other species that farm, they’re often highly social. For example, the leaf-cutter ants have some of the largest societies of any species. When humans developed agriculture, societies took off, grew, and were able to be more cooperative and more social. So there could be an evolutionary link between farming, agriculture, and complex social societies. That sort of makes a prediction that in invertebrates that are cooperative and live in societies, we should go look for evidence of farming.