Andy Carstens is a current contributor and past intern at The Scientist. He has a bachelor’s degree in chemical engineering from the Georgia Institute of Technology and a master’s in science writing from Johns Hopkins University. Andy’s work has also appeared in Audubon, Slate, Them, and Aidsmap.

Dec 1, 2022 | 3 min read
In these rose-like diagrams, the numbers of deaths are proportional to the size of each wedge: red wedges are deaths due to combat, blue are due to disease, and black are deaths resulting from all other causes. The right and left diagram, representing before and after the launch of a widescale sanitation effort in March of 1855, are to scale, showing a drastic decline in mortality due to illness.
Wellcome Collection

When nurse Florence Nightingale arrived at the British Army’s hospital in Constantinople in 1854 to help treat soldiers wounded in the Crimean War, she immediately encountered squalor: nonfunctional sewer systems, vermin, and only a single bedpan for every 40 men. “The hospital was a chamber of horrors,” says R.J. Andrews, a freelance data scientist. “This is why everybody [was] dying of communicable diseases,” such as cholera, dysentery, and typhus. 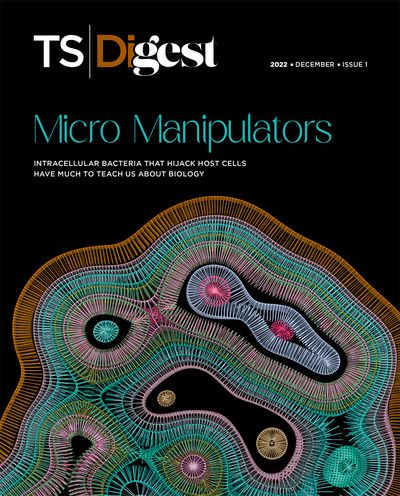 When the war ended in 1856, Nightingale returned to London, worried that society’s memory of these deaths would quickly fade, Andrews tells The Scientist. Before that happened, she intended to ensure that future conflicts would result in fewer needless deaths unrelated to combat.

To convince people that sanitation and mortality were inextricably linked, Nightingale waged a war of her own—one of information, fought primarily against the British government’s War Office. The bureaucrats in charge there resisted change because, in their eyes, the infantry were “chattel,” according to Andrews, whereas Nightingale’s religious beliefs led her to view each individual as deserving of protection. Directing a team of lithographers, statisticians, and scientists, she often worked 20-hour days to create graphics that illustrated how improved sanitation would save lives, says Andrews, who edited a new book on the nurse’s innovative data visualizations. “She was relentless.”

Her most influential diagrams, published in 1858 and 1859, were part of a three-act story. Act one illustrated the problem: The death rate among British soldiers during the Crimean War was extremely high (roughly 23 percent). In act two, Nightingale and her colleagues showed that most of these soldiers died from disease, not combat. And finally, act three revealed the solution: A massive sanitation effort launched in the spring of 1855 to clean the Constantinople hospital caused death rates to plummet.

The second graphic in particular, called the “Diagram of the Causes of Mortality in the Army in the East” (pictured), caused a splash because its two circular figures were so unique, Andrews says. “We don’t have a great name for what these are.” In fact, one of the major criticisms of the chart was that its color-coded, differently sized wedges were too unconventional and, as a result, inaccessible. However, Andrews argues that nobody remembers the more typical bar or line graphs published by the War Office, whereas people are still talking about this one today.

While her work garnered media publicity, Nightingale herself remained anonymous as the campaign’s orchestrator. Part of the reason, Andrews says, was that nameless pamphleteering was common, but perhaps more importantly, it was likely because she was a woman. “She’s already really rocking the boat in terms of how much power a woman can hold in society,” Andrews says. “So she has to be very careful about how she exerts that power.”

In the end, her visualizations prompted real change. Reduced crowding and better sanitation during subsequent wars shrank disease-related death rates of British soldiers to below that of civilians. And in 1875, functioning sewer systems and access to clean water became part of Britain’s Public Health Act, spreading Nightingale’s reforms beyond military hospitals and into people’s homes.