Holly Barker is a freelance journalist based in London who primarily covers stories related to psychology, neuroscience, and the natural world.

Glioblastoma, an aggressive brain cancer diagnosed in approximately 12,000 people in the US each year, is difficult to treat. The tumor invades brain tissue, making complete removal impossible. Recently, electrical fields known as tumor-treating fields (TTFs) have shown promise in destroying tumor cells, but traditional TTF devices are unwieldy: they require electrodes to be bandaged to the patient’s shaved scalp and are powered by a book-size battery that patients must carry while wearing the device for at least 18 hours per day for months or even years after tumor-removal surgery, says Ohio State University radiation oncologist Joshua Palmer. Now, researchers in China have developed a more user-friendly implant that inhibits tumor growth in cultured cells and in rats (Sci Adv, 8:eabm5023, 2022). 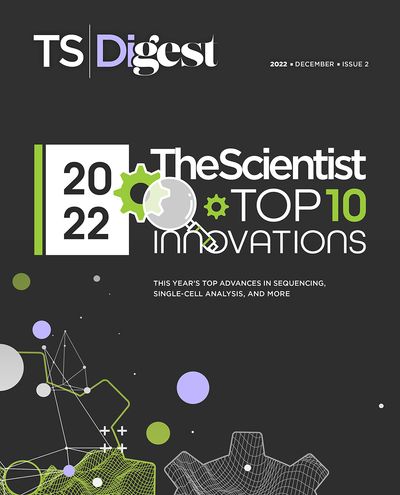 Bingzhe Xu, a biomedical engineer at Sun Yat-sen University in Guangdong, China, and colleagues have built a chip-sized, wireless device they call an ultrasound-powered tumor treating device (UP-TTD), which can be implanted into the tumor site during surgery. It converts ultrasound radiation into electrical energy using a tiny generator consisting of a polymer membrane, a thin piece of copper, and a hollow center wrapped in biocompatible material.

A wireless device implanted inside a rat brain shrinks cancer cells remaining after surgery. When triggered by ultrasound, the implant produces an electrical tumor-treating field (TTF) that interferes with proteins involved in cell division and triggers apoptosis in tumor cells. Healthy cells such as astrocytes, meanwhile, aren’t disrupted by the electrical frequency emitted by the device, while neurons are unaffected because they don’t divide. The researchers say that two implants would be used in humans, sandwiching the tumor. WEB | PDF
© IKUMI KAYAMA, STUDIO KAYAMA

When ultrasound radiation is externally applied to the UP-TTD, the polymer membrane vibrates against the metal layer, generating an electric charge. The whole device is less than 500 micrometers thick yet remains intact after hundreds of bending tests.

The device could address the several design problems of current TTF devices, says Palmer, who wasn’t involved with the new study. For starters, users no longer need to shave their heads for months on end or carry a large battery. By focusing the electrical field on the target area, rather than the whole head, the device offers “more than 1000 times improvement on spatial resolution” over existing TTF devices, Xu writes in an email to The Scientist. Since TTFs from the UP-TTD don’t need to penetrate the skull, they stay concentrated around the tumor site and require less energy, adds Xu.

In tests, the team placed the UP-TTD on either side of cultured glioblastoma cells removed from patients and activated them with ultrasound. After 12 hours, the cells’ growth rate decreased by as much as 58 percent compared with cells not exposed to TTFs. The researchers also implanted the device into rats with brain tumors; after six days of ultrasound treatments, the animals’ tumors were about 73 percent smaller than those of their untreated littermates.

Palmer raises one caveat: the device’s fine resolution could backfire for cancers that tend to migrate throughout the brain. “I could see a situation where you might want to use both [approaches],” he says, adding that he suspects the UP-TTD could work on other cancer types, especially more-localized tumors.