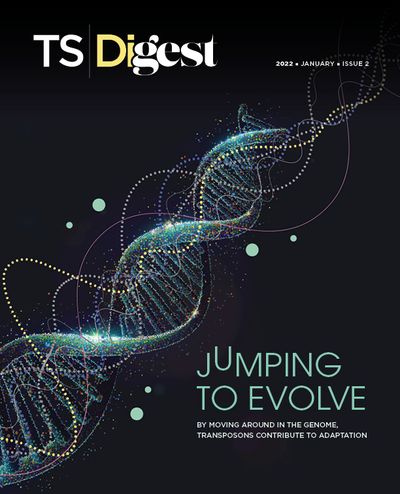 Approximately 2 meters of DNA is crammed into each of the human body’s cell nuclei, themselves only about 10 μm in diameter. To achieve this packaging feat, DNA is wrapped around proteins to make chromatin fibers, and further condensed into tightly concertinaed loops. The formation and maintenance of these loops largely depends on two protein complexes—cohesin and condensin—each of which takes charge at different phases of the cell cycle. But how these complexes wrangle the stringy chromatin into submission has to this point been a bit of a black box.

Cohesin and condensin are ring-shaped like donuts, leading researchers to propose that chromatin might somehow thread through their middles. But work by chromatin biologist Jan-Michael Peters of the Research Institute of Molecular Pathology in Vienna, and colleagues now shows that, in cohesin’s case at least, the protein complex grabs DNA and pulls it, passing it from one part of itself to another, much like a person hauling rope might pass it hand to hand.

It’s an “outstanding paper,” says Erez Aiden, who studies genome folding at Baylor College of Medicine but was not involved in the research. It contains “by far the best experiments to date . . . in terms of the detailed mechanics of cohesin,” and the results suggest that “we were way off about the donut threading [idea],” he says.

To observe the movements of cohesin, Peters’s team used specialized microscopy techniques including high-speed atomic force microscopy (HS-AFM), which enables visualization of individual molecules in real time, and single molecule fluorescence resonance energy transfer (smFRET), which detects when molecules, or parts of molecules, come into close proximity. The researchers also tested cohesin under an assortment of conditions and with various mutations to ascertain how these affected cohesin’s movements, interactions within the protein and with DNA, and the complex’s ability to drive DNA loop formation. From these analyses the researchers were able to map the parts of cohesin that interact with DNA and piece together the likely stepwise manner in which the DNA is manipulated.

The results suggest a specific chain of events in the dance between cohesin and DNA. First, cohesin’s “hinge” region binds DNA and swings toward one of the protein complex’s two “head” regions. The DNA is then transferred to that head, which converges with the other head to clamp the DNA. Meanwhile the hinge swings back to its original position readying itself to bind another bit of DNA. In the hand-to-hand rope-hauling analogy, the hinge is one hand and the heads are the other.

DNA PULL: The hinge region of cohesin binds DNA and swings toward one of the head regions. The other head region then clamps down on the DNA as the hinge is released to swing back to its original position and bind a new part of the DNA.  WEB | PDF
© nanoclustering.com

This mechanism was inferred rather than directly observed because, while both DNA and cohesin were present in the smFRET experiments and the loop assays, only the cohesin was visible in the former and only DNA in the latter. Also, the HS-AFM experiments only contained cohesin. As a result, says Aiden, questions remain about precisely how the two interact and how loops arise.

Given that protein complexes related to cohesin and condensin are found in all living cells and regulate not only DNA packaging but also gene functions, answering these questions is of fundamental importance to understanding how the majority of life forms operate, says Peters.