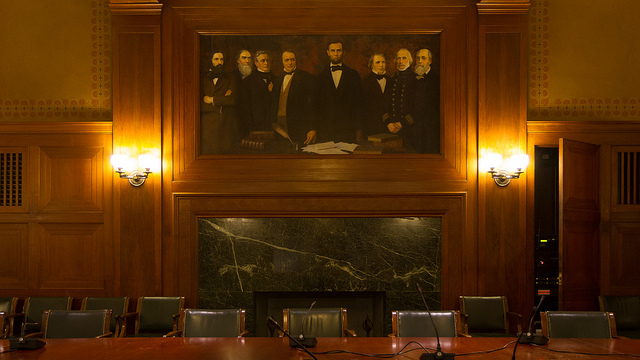 A painting at the National Academy of Sciences depicts Abraham Lincoln signing the organization’s charter.FLICKR, EP_JHUAn online petition calling on the National Academy of Sciences (NAS) to revoke memberships bestowed on people sanctioned for sexual harassment has garnered more than 250 signatures since it was posted on Wednesday (May 1). Published in the wake of the organization’s national meeting, which ended on Tuesday, the petition states: “By removing these individuals from the NAS community, we can begin to repair [any] damage done by these individuals, restore the NAS community to a place of prestige and acknowledge we can and will move forward with a commitment to providing environments that foster scientific discovery.”

In a statement to The Scientist in response to the petition, NAS spokesperson William Kearney writes, “The National Academy of Sciences is extremely sensitive to the seriousness of the issue of gender and sexual...

The NAS is a nonprofit charged with advising the US government on scientific matters; it also publishes the journal PNAS. Membership in the organization is considered a high honor for researchers, with no more than 84 new members elected each year.

According to a blog post by an author who goes by the screen name “Flighty Squirrel,” and whose biographical details match those of BethAnn McLaughlin, a Vanderbilt University neuroscientist who started the petition, “The National Academy of Sciences held their annual meeting this week . . . one thing was notably absent—a discussion of what to do about two of NAS’ most well recognized members—neuroscientist Tom Jessel and cancer geneticist Inder Verma.”

The petition comes as other organizations move to exact professional consequences on individuals who have engaged in sexual harassment or assault.

Jessell was removed from his posts at Columbia University and HHMI in March. While the exact reason for his dismissal has not been disclosed, a student newspaper reports that he had engaged in a relationship with a member of his lab. Verma was placed on leave from the Salk Institute last month as an investigation looks into allegations of sexual harassment stretching back decades. His resignation as editor-in-chief of PNAS was announced Wednesday.

The petition comes as other organizations move to exact professional consequences on individuals who have engaged in sexual harassment or assault. Yesterday, for example, the National Academy of Motion Picture Arts and Sciences (which awards the Oscars) announced it was expelling Bill Cosby and Roman Polanski. The US National Science Foundation and the U.K.’s Wellcome Trust now require institutions to inform them if grantees have been disciplined for harassment.

A tweet from an account that appears to be McLaughlin’s reads, “The National Academy of Sciences was founded to be the best of US science. They harbor men who [are] guilty of harassment. This is a blight on science and a terrible message to trainees.” McLaughlin did not respond to requests for comment as of the publication of this article.