ABOVE: SAY CHEESE: Helen Purdy Beale (front row, in the fur coat) poses for a photo in 1919 with her mycology class at Cornell University, where she began her graduate work in plant pathology.
W.R. FISHER, CORNELL UNIVERSITY

In 1925, after years of study and research, Helen Purdy Beale seemed to be on track to become the first woman to graduate with a doctorate from Cornell University’s plant pathology department. Her final hurdle was to obtain the approval of her adviser, Herbert Whetzel, who, unbeknownst to her, had dissuaded previous female graduate students from obtaining PhDs on the grounds that overqualified women could not get hired at agricultural experimental stations. True to form, Whetzel told Beale that her thesis could not be accepted and returned it, heavily marked up with red ink. Beale hurled the pages into his face, screaming, “You have shown the claws of the devil!” and stormed out, according to an account by virologist Karl Maramorosch. Beale would go on to earn her doctorate from Columbia University in 1929 and change the course of plant virology with her work on tobacco mosaic virus (TMV).

TMV had been discovered only in the late 19th century, when chemist Adolf Mayer noticed that some tobacco plant leaves developed multicolored splotches and eventually shriveled up. Viruses were little-understood at the time, in part because, unlike bacteria, they couldn’t be seen with a light microscope. Mayer and other scientists ascribed the condition to parasites, enzymes, or other substances that they were unable to characterize in the plants, and could only diagnose TMV using the rudimentary technique of looking at diseased plants’ symptoms. Beale set out to change that.

After graduating from Columbia, Beale returned to the Boyce Thompson Institute (BTI) in Yonkers, New York, where she’d previously worked as a plant pathologist for a few years. She postulated that a substance in animal serum—today known as antibodies—could be used to study plant viruses. Indeed, Beale found that the serum of rabbits that were injected with TMV-infected sap could then be mixed with samples of sap from other plants to test whether they were also infected: only TMV-infected sap would form a heavy precipitate (made of antibody-bound virus) when mixed with the serum. Different plant species infected by the virus yielded similar precipitates, indicating that the disease did not arise from a defect of the plants themselves, but was caused by an infectious agent. Beale subsequently found that the precipitate formation was specific to TMV, and she devised assays to determine viral concentration—methods that were among the first serological techniques in virology.

Yet Beale’s work went largely unnoticed for at least 30 years. Texas A&M University virologist Karen-Beth Scholthof, who has written about Beale’s contributions to the field and describes her as the “mother of plant virology and serology,” notes that plant pathologists were still using the tools and methods of the early 20th century as late as the 1960s before they rediscovered Beale’s experiments and began using her assays, the fundamentals of which are still used today. Frederick Charles Bawden, a plant pathologist, wrote in 1970: “I still remain puzzled to understand how it was that so many virus workers long remained reluctant to use these invaluable techniques. With hindsight, it is very evident they were even more valuable than those of us who used them appreciated.”

Scholthof says last year’s rapid COVID-19 test development owes a debt to Beale’s foundational ideas from a century ago. “Then and now, serology is really important for understanding more about the biology of these viruses, where they are localizing in cells, and having rapid diagnostics,” she says.

Beale remained at BTI for several decades and, after her retirement, compiled a 1,500-page bibliography with more than 29,000 plant virology references. She died in 1976. Her Ridgefield Press obituary described her as “unflappable, witty, and persevering.” 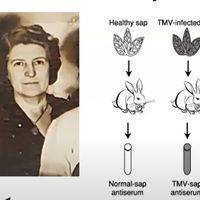