ABOVE: Prints at the base of the excavation trench
NATIONAL PARK SERVICE, USGS, AND BOURNEMOUTH UNIVERSITY

On the right day, given the proper conditions, human footprints can appear out of nowhere on the flats of White Sands National Park in New Mexico. Park scientists call them “ghost tracks,” and they look like prints from a beachgoer striding across damp sand. But new research published today in Science reports that at least some of these prints could be tens of thousands of years old, making them potentially the best evidence yet that people reached the Americas far earlier than once believed. Radiocarbon dating of seeds surrounding the prints suggests that they were made during the Last Glacial Maximum, when massive ice sheets are thought to have blocked any passage from the Bering Land Bridge into southern North America.

“It’s startling, really,” says Stuart Fiedel, an independent research archaeologist not affiliated with the study. “If the claim is validated, we are looking at pushing human occupation back much earlier than almost anybody had anticipated.”

“It’s certainly interesting, and it may represent something new,” says Ben Potter, an archaeologist at Liaocheng University’s Arctic Studies Centre. “I laud the team for approaching this rigorously.”

White Sands National Park contains a vast windswept field of gypsum dunes where children go sand sledding and an alkali flat that stretches for miles. From around 36,000–19,000 years ago, this alkali flat, called Lake Otero, contained varying levels of water. In 2018, researchers, including Daniel Odess, an archaeologist with the National Park Service, David Bustos, the resource manager at White Sands, and Matthew Bennett, a geologist and footprint expert at Bournemouth University in the UK, reported that, under certain moisture conditions, ancient human footprints, as well as tracks of extinct megafauna like ground sloths and mammoths, would appear around the edges of the now-dry lakebed. But no one knew exactly how old these tracks were, and some researchers suggested that at least some of the human-megafauna pairings were simply older megafauna tracks re-exposed by wind and stepped on by later humans. 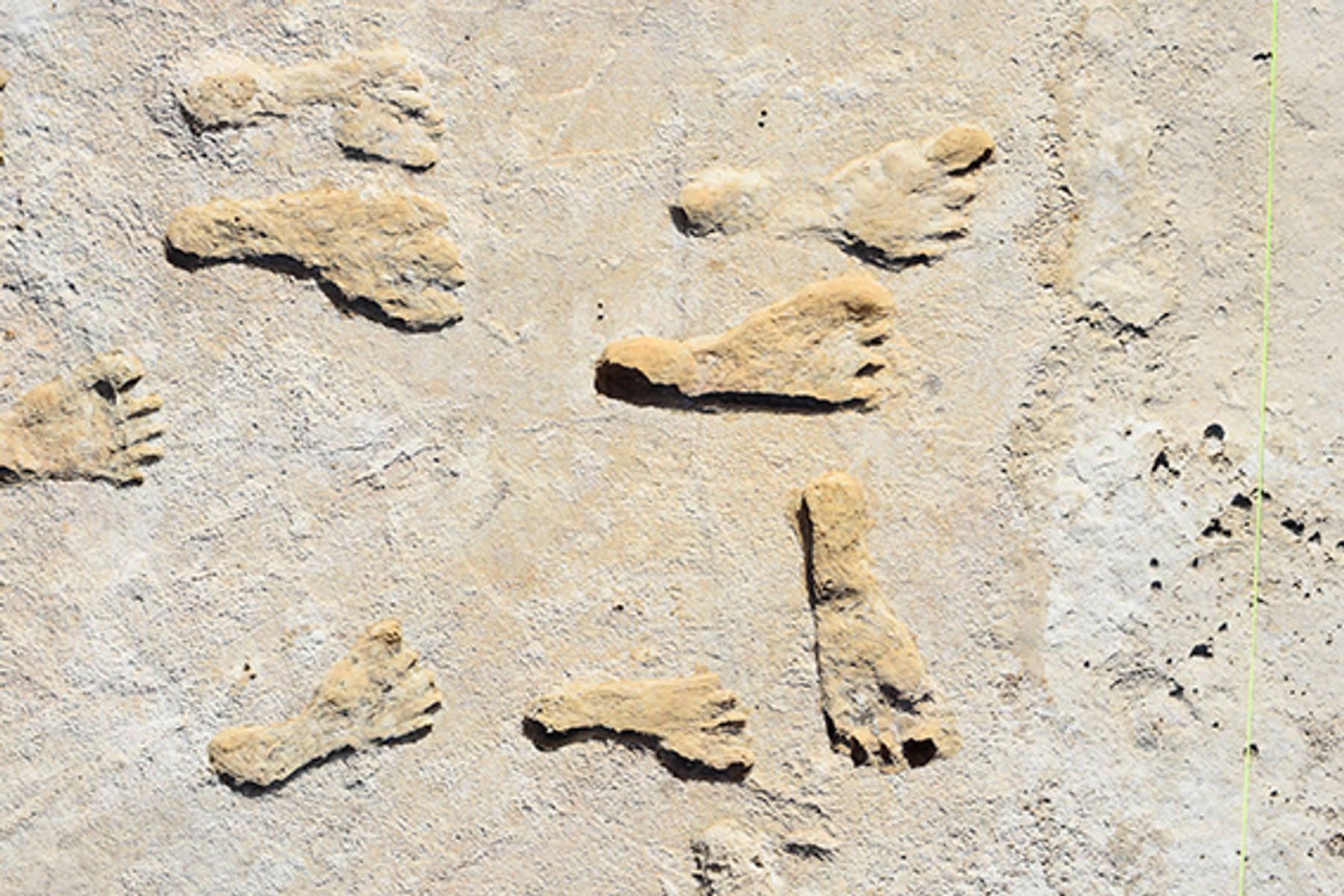 So Odess, Bustos, and Bennett worked with a team to date the tracks more precisely. “We were looking for an area where we could find a slope and see tracks on a surface disappearing into the slope, which suggested an old beach edge,” in order to find a cache of buried footprints, says Odess. This would give the team an un-eroded place to dig through the layers of sand, silt, and clay that had deposited over time to try to determine the date of the tracks in their context.

The researchers eventually found one promising site on the eastern edge of the alkali flat. They began excavating and discovered multiple layers of human footprints, as well as interspersed mammoth prints. Most importantly, the team uncovered seeds from an ancient ditch grass called Ruppia cirrhosa sprinkled within various layers. Radiocarbon dating of the seeds established the ages of the multiple layers that contained tracks at between 21,000 and 23,000 years old, long before the ice sheets retreated. While in recent years researchers have reported possible evidence for human occupation of North America at even earlier timepoints, the earliest well-accepted site of human activity in the Americas remains Monte Verde in Chile, which dates to around 15,000 BP, and many researchers remain unconvinced that humans entered the continents much earlier.

See “The Peopling of South America”

The new study, too, leaves room for doubt. Its own authors, as well as Potter and other researchers who spoke with The Scientist, raise the point that radiocarbon dating of aquatic material can sometimes be subject to something called hard-water or “reservoir” effects, which could potentially make the age results too old. But the team radiocarbon dated other local materials and compared it to the seeds, and also examined the placement of the seeds in the layers themselves, to try to address this possibility.

“We were pretty skeptical,” says Odess. “We kept saying, it can’t be as old as we think it is. But then we would date seeds from the different layers and sure enough, the old ones are on the bottom and the middle-aged ones are in the middle and the youngest ones are at the top, and they line up the way we would expect if it were legitimate. If it were somehow contaminated or re-deposited, we wouldn’t see the dates being distributed that way.” In addition, the presence of a mammoth track in one of the topmost, or youngest, layers indicates that the upper age of the site can’t be more recent than the late Pleistocene, when the animals went extinct. The researchers write in their paper that, “In our view, an improbable series of events would be required to introduce a large hard-water effect by ~23,000 years ago when such effects were minimal for the previous ~20,000 years.”

The multiple layers of footprints spanned 2,000 years and were mainly from teenagers or children, though there were some adults. “This isn’t just a small group of people that show up, wander through and disappear, never to be heard from again,” says Odess. “They’re there for a long time. This is a group that’s having babies, growing up. It’s very difficult to dismiss this as some sort of failed migration.”

As it happens, a research paper published earlier this year examined the geology of the White Sands Basin and cautioned that researchers need to remember that such a dynamic landscape can affect the location of footprints and the dating of layers. Lake Otero has risen and fallen many times, the shoreline has changed, and wind has eroded, exposed, and hidden features over time. David Rachal, an independent geoarchaeologist and author on that earlier paper, notes that the new study’s age findings may not apply to other prints in the area. “There are thousands of footprints on the surface, which, without context, makes it really hard to date. They could be out there for 10,000 years or 5,000 years, and there’s high likelihood that the tracks are superimposed on one another.”

But Rachal also says that because Odess and his team searched for buried footprints within soil layers and were able to successfully date the layers, this problem fades. “I can tell you the stratigraphy that they’re working in is ideal for trackway preservation,” he says. Rachal and others emphasize that it is necessary to replicate these results in other preserved soil layers in the area.

Why were kids walking on the ancient lake shore over so many years? “When I was a kid, I loved to walk in the mud. . . . We may be seeing something like that,” says Odess. “We know there’s a bunch of behaviors humans engage in that aren’t necessarily work-related, and whether people are out there walking along the edge of the lake for fun or because their parents said, ‘go get some water,’ they’re gonna leave tracks, and that’s what we are seeing.”