ABOVE: The view from the Julio Garcia Diaz building at UPR’s Río Piedras campus after the storm
TUGRUL GIRAY, UNIVERSITY OF PUERTO RICO

Two weeks ago, builders finally started to repair the ceiling over Tugrul Giray’s lab at the University of Puerto Rico’s Río Piedras campus, near San Juan. It’s been more than 500 days of leaking and mold, since Hurricane Maria tore through the island in September 2017—a deadly category 5 storm that caused a humanitarian crisis, with an estimated death toll in Puerto Rico of nearly 3,000.

Giray’s lab is among 14 or so in the Julio Garcia Diaz biology building, which was among those severely damaged, particularly as it was already undergoing roof repairs when the storm hit. Water seeped in through the roof and windows, damaging costly research equipment, furniture, and lab materials. Toxic mold thrived in the moist, hot climate, creating hazardous conditions...

The repairs to the ceiling are a first step to “make the place a safe space to work in,” says Giray, who estimates he lost $54,000 worth of reagents and other research materials. He hasn’t been able to work in his lab since 2017, and is currently awaiting funds from the university for repairs and materials necessary to make his lab operational again.

Maria was a catalyst for many things, but the situation in Puerto Rico was really bad before.

Some of the casualties from the hurricane are less easy to restore: “Collections take much longer time and may never be replaced,” says Giray’s colleague Riccardo Papa, who lost almost all of his DNA samples documenting the diversity of butterflies across South America when his lab’s –80 °C freezer lost electricity. Papa, an evolutionary biologist, didn’t have a lab again until a week ago, and until recently has been meeting with his students and postdocs at coffee shops or places around campus to discuss research. He has been able to do some experiments and genetic analyses in another building. Repairs are still underway for the damaged insectary, in which his team raises butterflies.

Research at the University of Puerto Rico (UPR)—the territory’s main public university system consisting of 11 campuses dotted across the island—is beginning to approach normality, but recovery has been dragging at hard-hit buildings such as Julio Garcia Diaz. The effort is compounded by a slow-to-act university administration, Puerto Rico’s ongoing financial crisis and associated budget cuts to the university, as well as reportedly low insurance payouts and uncertainty about when recovery funds will be paid.

“There will definitely be lasting impacts of the hurricane,” says Papa. “With the university being in a difficult moment financially, and the government of Puerto Rico cutting funds for the University of Puerto Rico, it’s probably the worst time ever. It’s going to take time to restructure.”

After Hurricane Maria, electricity, communication, and water were running again after a few months and classes resumed. Researchers and their students helped clean up and fixed what they could around campus. Some researchers, such as Ingrid Montes, an organic chemistry professor at UPR and a faculty advisor for the American Chemical Society, taught classes outside for a while until their damaged buildings were repaired. 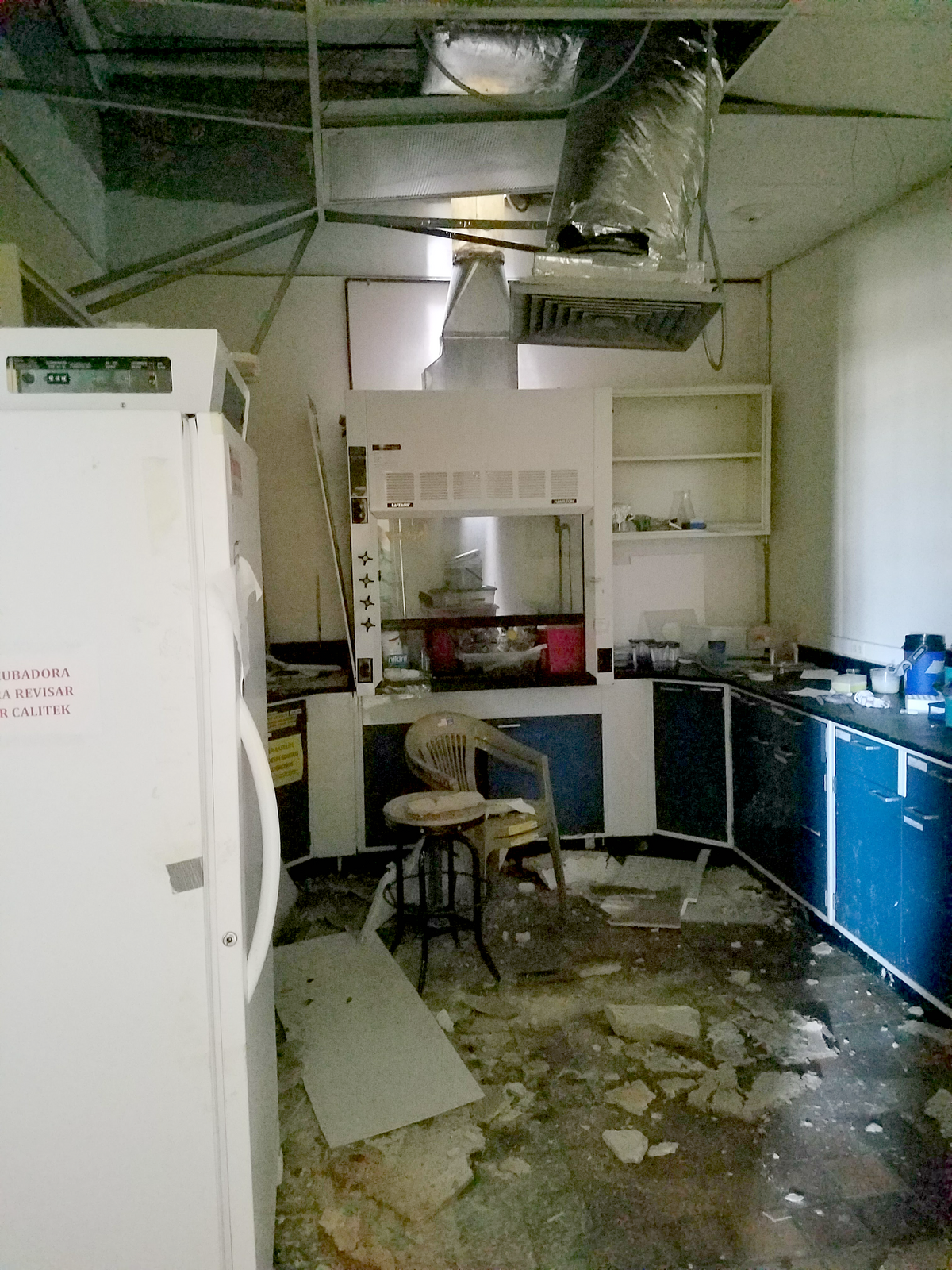 “There is a lot of recovery still happening,” says Montes. Many scientists “are producing, and they are publishing and everything, and they are applying for additional grants,” but they’re not quite at 100 percent yet, she adds.

Many displaced researchers have set up camp in UPR’s Molecular Sciences Research Center. Only opened in 2011, the facility survived the storm with running water and electricity, as well as working internet. In the immediate aftermath of Maria, it was opened to the public, so people could get online and contact family members. Meanwhile, scientists sought refuge in the building’s common workspace as they waited for their labs to become fully operational.

“We took half a bench and sort of squished our DNA and RNA work there,” says Giray, who published several studies on honeybee behavior last year. He was able to continue work by stretching the money from existing grants as much as he could, and putting his summer salary towards research. Some of his colleagues received some aid from Florida International University’s CREST Center for Aquatic Chemistry and Environment, which, like some other institutions in the US, temporarily adopted several UPR students. Other researchers and students were able to replace materials with the help of post-hurricane grants awarded through a partnership between the Puerto Rico Science, Technology, and Research Trust, AAAS’s Caribbean division, and other scientific societies, according to the Trust’s grant program manager Andreica Maldonado. But the awards are small and not enough to cover researchers who need to replace large, costly equipment, she adds.

Puerto Rico’s financial crisis is one reason why recovery has been progressing so slowly. Even before the hurricane, educational institutions were affected by austerity measures that cut the university’s budget, says Fernando Tormos, who is studying disaster recovery in Puerto Rico as a postdoc with the Scholars Strategy Network at the University of Missouri, St. Louis. The hurricane hit just shortly after a lengthy student strike against budget cuts and tuition increases, shutting down the Río Piedras campus for several months, Montes says. “Maria was a catalyst for many things, but the situation in Puerto Rico was really bad before,” she adds.

The university has been slow to organize itself in the wake of the hurricane, notes James Ackerman, professor and director of UPR’s herbarium and zoology museum. He had moved many of his dry collections from the damaged museums into the Molecular Sciences Research Center to protect them from encroaching mold and potential insect infestations. But “it took me eight months to get funding to bring the collections back. . . . That’s because the administration wasn’t responding,” he says. “Bureaucracy seemed to come to a standstill, almost.”

“In such a large and complex community, it is obvious that there are always different perceptions and we are always willing to listen to them and improve processes,” writes Mario Alegre-Barrios, director of communications at UPR Río Piedras campus, in an email to The Scientist. Several factors have stagnated the recovery: Many of the campus laboratories were already in need of repair before the hurricane, he explains, and the process of finding contractors to do that work was disrupted by the storm. In addition, insurance companies have been slow to pay for the damages, as has been the Federal Emergency Management Agency (FEMA), which had offered supplementary funds, he adds.

After the hurricane, the fiscal board overseeing the government’s spending called for even stricter austerity measures to help pay off some of the country’s debt. UPR’s budget was cut even further, and the university subsequently doubled the tuition costs for incoming students. Researchers fear this will come as a heavy blow to the university’s recovery, and push scientists to take their research elsewhere. “It’s just not the thing that should be done, especially following this hurricane,” says Giray.

Giray and Ackerman say a few of their colleagues decided to leave the island in the aftermath of the hurricane, although there may have been additional reasons why they left. “While some faculty had a hard time of it psychologically,” Ackerman says of the hurricane, “my general impression is that undergraduate and graduate students likely suffered most.”

Hundreds of students left Puerto Rico following Hurricane Maria, often to pursue temporary positions at US institutions—including some of Papa’s graduate students. Some students returned once the worse was over, says Montes, but others stayed at US universities.

Several researchers are concerned that the recent hikes in tuition fees, coupled with a relatively low financial assistance for graduate students and postdocs, make UPR an increasingly unappealing option. Indeed, student enrollment dropped after the hurricane, but “today we have more applications for admission than last year,” according to Alegre-Barrios.

Montes is worried that those who do graduate with UPR degrees will increasingly decide to pursue careers elsewhere, in the continental US or Europe, a trend she has seen among her students, she says. “We are losing our future generation of professionals, and that is true not only for science, but for everything. Here, the jobs are not competitive, and are not good, the salary is very low, the benefit for retirement, for example. Many things have been affected by the economic situation of the island.”

On top of this, uncertainty looms over the university’s future as the Middle States Commission on Higher Education (MSCHE) announced last month that it has placed all 11 UPR campuses on “show cause” for failing to submit certain financial documents required by them. Some are worried the university could lose accreditation if it fails to comply, and ultimately close. “That would be the end for the system,” says Montes. UPR’s president Jorge Haddock stressed in a recent statement that the move is a routine process for MSCHE, and doesn’t mean that UPR will shut down. “We have been educating the Puerto Rican people for 115 years, and that is how it will continue to be,” he says in the statement (translated from Spanish).

Giray and his colleague Jose Agosto-Rivera are investigating the foraging behavior of individual honeybees throughout the day.
Manuel Giannoni Guzmán, postdoc at Vanderbilt University

In the midst of uncertainty about the future of science in Puerto Rico, some biologists have discovered new research opportunities. Marine biologist Edwin Hernández-Delgado was in the middle of a coral reef restoration project in Culebra, a small island off the east coast of Puerto Rico, when the reefs were decimated by Hurricane Irma, just two weeks before Hurricane Maria, which destroyed most of the remaining coral. “This is something that we had never witnessed before, that kind of damage,” he says. The hurricanes destroyed nearly 8,000 corals he and his team at the conservation nonprofit Sociedad Ambiente Marino had grown with the intent to plant around Culebra, as well as more than 60,000 they had already planted onto the natural reefs.

“This year we are trying to bounce back from that damage,” explains Hernández-Delgado, who heads the Center for Applied Tropical Ecology and Conservation (CATEC) at UPR. He and his team are planning to transplant around 3,000 corals onto the reef in early spring.

Although the hurricane was a significant setback from a conservation point of view, he says, “it created a lot of opportunity to understand the recovery processes.” His team has recently launched several projects examining how reefs recover from natural disasters, and how the remaining shallow water corals dissipate wave impact during hurricanes and other storms.

Eighty percent of the island’s honeybees also perished during the storm. This led Giray to broaden the scope of his research and study how bee populations respond to hurricanes. With the support of a grant through the National Science Foundation’s RAPID grant system—specifically intended to help researchers study the immediate effect of natural disasters—he is now investigating whether there have been genetic changes in those insects that survived the storm. “There seems to be a selection for genes that are involved in metabolism,” says University of Vermont entomologist Rosanna Giordano, who is working with Giray on the research. The scientists hypothesize “that this ecological pressure the honeybees experience after a storm, where there is a dearth of resources, it basically selects for honeybees that are better at storing their food,” she explains.

Trying to bounce back from the hurricane has been a real challenge, says Hernández-Delgado. However, “in the long run it has been positive. We have been able to accomplish a lot of work within this year and a half. . . . I would say probably within three years or so, we should be where we were before.”

For Montes, the hurricane has not only revealed the resilience of natural ecosystems, but also underscored that of the Puerto Rican people and its researchers: “We have been really, really strong and resilient. We learned that very well and we are just doing our best.”