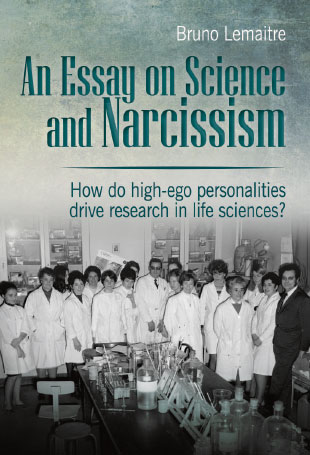 BRUNO LEMAITRE, APRIL 2016It is rumored that Nobel Prize–winning molecular biologist Jacques Monod’s final words were, “I seek to understand.” The deathbed statement of this pioneering researcher seems to echo the idealistic scientific search for truth. But some of his close colleagues have suggested that seeking truth was only one part of Monod’s story. Other contemporaries were struck by Monod’s robust ego: his strong need to dominate others and his thirst for fame.

Even Monod’s interpersonal relationships could be seen as optimal for a man in search of power. He married a well-connected woman—the sister-in-law of a famous geneticist. Later, he had an extramarital relationship with a skilled research assistant: an excellent way to keep tabs on his other colleagues in the institute. Monod also had an affair with a journalist at the French newspaper Le Monde, another advantageous relationship for someone desiring public recognition.

Psychological studies show that narcissistic individuals tend to use human relationships to attain positions of authority or to improve their own visibility, as illustrated by Monod’s strategic mate choice. The Monod case suggests that it would be naive to see scientists as simply seekers of truth. It is likely that the Nobel laureate enjoyed the position of power that science afforded him, and that it suited his personality. After all, a scientist is someone with expert knowledge who can reveal complex secrets to the public.

But how does narcissism, a personality trait associated with dominance and short-term mating strategies, influence the scientific process? As any minimally aware researcher will recognize, there are aspects of science, especially its politics, that are nonrational but that nevertheless have a tremendous impact on how science is actually practiced. This probably relates to the fact that some scientists are more inclined than others to battle for leadership positions. Scientists high in narcissism tend to use the scientific arena to reach positions of power for their own benefit rather than to serve the community.

But it would be erroneous to see this need for power in a purely negative light. The desire to get ahead probably contributed a great deal to Monod’s scientific achievements. After all, the drive to succeed in science is likely a legacy of our evolutionary forebears, who were motivated to attain high social status for adaptive reasons. But the influences of narcissism on science could be more subtle, influencing career choice or strategies for achieving success. For example, scientists hungry for power are more likely to follow a clinical career path, to be attracted by jobs at elite institutions, or to gravitate to a fashionable field of research already in the spotlight. Scientists high on the narcissism scale are often better at networking, aggrandizing scientific notions or colleagues who are most likely to provide them with a direct benefit. Narcissistic researchers also tend to excel at using verbiage that resonates with the short-term expectations of politicians. Even as they pursue a career that prizes objectivity, narcissistic scientists may unconsciously distort reality to maintain a positive illusion about themselves. The growing trend of irreproducibility and overexaggeration in science could be explained by the need of narcissistic personalities to reach the status they believe they deserve.

These are only some of the fascinating questions related to the influence of personality on the conduct of science. The scientific enterprise is an ideal environment for observing such influences in the context of the objective quest for knowledge.

Bruno Lemaitre studies insect immunity at the Ecole Polytechnique Fédérale of Lausanne in Switzerland, where he’s also developed a strong interest in psychology and epistemology. Read an excerpt of An Essay on Science and Narcissism: How Do High-Ego Personalities Drive Research in Life Sciences?