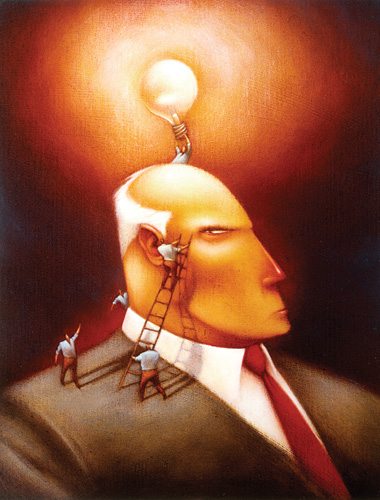 When I was a young faculty member struggling to earn tenure, I was denied authorship on a paper that represented a major scientific advance in my field. It is an injustice that I have since learned is pervasive throughout the scientific community, stemming from a hierarchy based on seniority alone. Failing to credit the junior scientists who make many of our original discoveries not only undermines the importance of this younger class of researchers, but actually threatens scientific progress.

I had recently taken a position at an Ivy League institution when another junior faculty member showed me a micrograph of a macrophage containing intracellular bacteria. I immediately noticed an electron-dense material near the bacterial cells, which I suspected might be actin filaments of the host cell. I agreed to test this hypothesis, and using a fluorescent actin stain, found that, indeed, many of...

A month later I brought additional data confirming my findings to my collaborator’s office, where I noticed a paper on his desk with the bacterium’s name and actin in the title. He and a senior professor were listed as the authors, but I was not. “Where’s my name?” I asked. He noted that he and this senior professor had decided to perform their own electron microscopy studies, and were submitting their findings to a prestigious journal. “You’re welcome to publish your work separately,” he suggested.

Despite the fact that he and I had initially discovered the association between this bacterium and actin filaments, because my data was not included in their final manuscript, I was excluded as an author. I was being considered for tenure over the next year, and thought that protesting further might jeopardize my chances. But the loss of credit also had the potential to harm my advancement. In the end, I decided to remain silent, and published my paper 6 months after theirs.

At conferences, the fear of potential theft of ideas is often the unacknowledged elephant in the room.

The discovery of the role of actin in bacterial movement within cells subsequently led to a burst of new research and major advances. Their paper, the first to be published on the association of actin and the bacterium, has been cited 765 times. Coming second, my paper has received far less attention, with 233 citations.

Twenty years later, I still don’t trust confiding new findings to other researchers. My takeaway lesson was that the safest strategy was to divulge my results only after they were accepted for publication. And I’m sure I’m not the only one who feels this way. Science is too often a cutthroat venture, with publications as the currency for measuring one’s success. But with everyone keeping their findings secret until they have been approved by the peer-review process, aren’t we slowing the course of scientific discovery?

Scientific history is replete with discoveries marred by lack of recognition of crucial contributors, and such occurrences have often altered the course of research. In 1953, James Watson and Francis Crick published their landmark discovery of the structure of DNA, for which they and Maurice Wilkins later received the Nobel Prize. It was truly groundbreaking work that shaped future generations’ work in genetics. However, save an acknowledgement at the end of the paper, Rosalind Franklin was not recognized. Watson and Crick had, without her permission, gained access to Franklin’s high-quality X-ray crystallographic photographs of DNA, which allowed them to correct their model and deduce the true structure of DNA. The discord surrounding who deserved credit for each component of the discovery is thought by some to have slowed progress in our understanding of how DNA works for at least a decade by limiting collaborations and the open sharing of ideas.

Controversy has similarly plagued the discovery of the AIDS virus. In 1983, Luc Montagnier, of the Institut Pasteur in Paris, and colleagues reported the lymphadenopathy retrovirus LAV to be the virus possibly responsible for AIDS. A year later, after Montagnier had inadvertently sent mislabeled samples of a more aggressive strain of the virus—called LAI, the code for the patient it came from—to Robert Gallo of the National Institutes of Health, Gallo claimed that a retrovirus he called IIIB was the causative virus. Sequencing data subsequently revealed that IIIB was virtually identical to LAI, and suggested that Montagnier was likely the true trailblazer, but the exact truth will never be known. He and his colleague Françoise Barré-Sinoussi were awarded the Nobel Prize for the discovery, and the controversy divided the scientific community, harming a previously open and fruitful collaboration.

Scientists have failed to establish clear mores for crediting discoveries. It seems only ethical that the person who generated the hypothesis and proved it with experimental data be afforded credit for his or her discovery. Patent and copyright laws have established this expectation.

But it doesn’t often work this way in practice. During the preliminary phase of research, formal laws are usually not applied. Despite several incidents of suspect “findings,” few in the scientific community want to create a legal quagmire. Without specific and accurate documentation of exactly when a discovery was made, disputes can quickly descend into “he said, she said” territory.

Many believe that false attribution is actually increasing in frequency, likely motivated by the steady decrease in grant-funding rates. Investigators who lack initial insight, but are technically skilled, can reproduce other researchers’ findings and submit their “original” research for publication, staking a false claim to the discovery. When scientists gather for conferences, the fear of potential theft of ideas is often the unacknowledged elephant in the room.

If scientific administrators aspire to accelerate innovation by encouraging team science, they must address this issue. Our university system should reward scientists who are honest and fair in their dealings with fellow investigators.  Specific protocols for guiding research and managing disagreements must be designed. Accurate laboratory records should reflect appropriate credit, and websites sponsored by international scientific organizations should be similarly designed to display accurate attribution of preliminary scientific discoveries. In addition, journals could post final drafts of papers before publication, allowing anonymous comments during a probationary period. If a substantive objection arises, the journal should require revisions or even reject the paper.

Most importantly, we need to encourage altruism and team spirit. If every researcher focuses on the goals of the project rather than individual parts, conflict will dissipate and openness will prevail. Senior mentors should encourage the success of the investigators they supervise, rather than focus on their own personal achievements. This system would validate each member’s contribution and encourage trust.

False attribution within the sciences threatens the integrity of research as a whole. The ultimate goal must be open scientific dialogue and assurance that appropriate credit is given. If these conditions are not fulfilled, not only individual scientists, but our entire society will be harmed. The price of inaction is the slowing of progress and the pursuit of truth.

Acknowledgments: I would like to thank Linda Mayes and Steven Southwick of  Yale University for their helpful discussions.