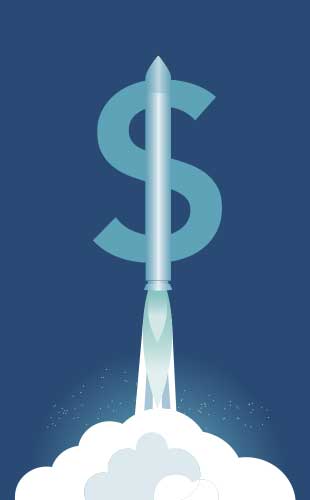 © ISTOCK.COM/KMLMTZ66A highlight in the career of any biomedical investigator, from a trainee to an established scientist, is when a research study is ready to be submitted for publication. Increasingly, this sense of gratification may be offset by sticker shock at the article processing charges (APCs) associated with publication. In the process of conducting research, writing and submitting a paper, and addressing reviewer and editor comments, APCs are often not at the front of an investigator’s mind. However, APCs have increased significantly, and authors’ historical indifference to publication fees may be changing as a result.

There are large variations in APCs—publication costs per manuscript can range from minimal or no fees to more than $5,000. These charges are influenced by a number of factors, including the journal and/or publisher, page count of the article, and the number and type of images. Open access (OA) journals include access fees in...

To understand some of the issues that may be driving the rise in publication fees, one needs to consider multiple and competing factors, including costs borne by publishers to bring an article (and a journal) to its final formatted state, as well as the cost recovery and potential profits generated by not only APCs but also revenue streams including subscription fees, advertisements, and reprint or licensing/copyright fees for single articles. While publishers are clearly entitled to profit from the multifaceted value they add, high profit margins, such as the reported 37 percent profit on $2.1 billion USD in revenue for Elsevier in 2014, highlight the current financial model that is supported for the most part by APCs and institutional subscriptions. (By comparison, Apple’s 2012 profit margin was 35 percent.)

It’s important to consider the perspectives of three interrelated constituencies: publishers, authors, and institutions that purchase or license journal content. From a publisher’s point of view, there are clear costs associated with publication, including the handling and review of submitted and revised manuscripts, copyediting, typesetting, and printing (for the print journals). The difficulty comes in assigning a true cost of publication, which varies from journal to journal. For example, some journals incur as expenses one or more of the following: salaries for professional editors, medical artists, biostatisticians, and support staff; costs for publishing non-reimbursed sections such as reviews, editorials, and commentaries; and honoraria for editors and associate editors. These are real and significant costs, but the fact remains that the profit margins of major publishers are substantial.

From the authors’ perspective, it is difficult to justify budgeting $10,000 in a grant to publish, for example, two papers in Cell Reports or Nature Communications (in this case, the open access charge is embedded in the APC) versus not having to pay any fees or paying the $2,000–$3,000 typically budgeted in a National Institutes of Health (NIH) grant.

More immediate and long-lasting change could be effected by institutions, funding agencies, and publishers coming together to define a fair solution, ideally with negotiations in harmony across continents.

It should be noted that authors often provide significant services to publishers for free, by providing peer review not only for published papers but for manuscripts that are reviewed and not published by a given journal. However, such peer review is essential, and journals typically select some of their top reviewers to join their editorial boards, which is accepted as a form of academic recognition. Although publication fees are subsidized in some institutions and countries, particularly in Europe, there is an ongoing—and occasionally heated—discussion that promotes “flipping” the current institutional subscription model to one based on APCs that authors would cover (presumably with assistance from their institutions). Although some experts support this model, others raise significant concern that this will shift (and potentially increase) the overall cost of publishing and access, leaving authors simply caught in the middle.

A final and important perspective is that of academic or other research institutions that collectively pay much of the cost to purchase journal subscriptions from the major publishers. Average subscription charges per title across all disciplines (arts and sciences) have steadily increased, with costs for biology and health science journals growing by 5 percent to 7 percent per year for 2014–2016. This likely unsustainable financial model for institutions has led to ongoing discussions regarding the rising costs and lack of transparency in institutional spending on journal subscriptions.

Although it is difficult to obtain costs that different institutions pay for journal subscriptions due to nondisclosure restrictions, a study conducted by the University of California Libraries (in collaboration with several other academic libraries in North America) provides some numbers. For example, the University of California system-wide package expenditure for 2013 for biomedical research disciplines and life sciences alone was $6.25 million. The issue of rising costs recently reached the boiling point in Germany. Beginning in January 2017, more than 60 organizations that are part of Project DEAL—which seeks nationwide licensing agreements with major publishers—either cancelled their subscriptions with Elsevier or allowed them to expire.

So what can be done to address the issue of rising APCs? We do not focus on the issue of OA publishing because it has its pluses and minuses. Authors can do due diligence in reviewing their options, including OA, and choose not to submit manuscripts to journals that assess high APCs. While this may seem to be the simplest solution—and could exert pressure on the publishers if carried out by a sufficient number of authors—it is easier said than done, given the pressures on investigators and trainees to publish in some journals that may charge significantly more than other journals.

More immediate and long-lasting change could be effected by institutions, funding agencies, and publishers coming together to define a fair solution, ideally with negotiations in harmony across continents. The NIH and major international funding agencies, research-funding foundations such as the Howard Hughes Medical Institute, and research societies and organizations could join together and exert pressure on publishers similar to that being applied in Germany. For example, the Gates Foundation has recently dictated that the research it funds cannot be published in journals such as Nature and Science (and their affiliated journals) that do not comply with its open access policy, with a temporary arrangement with Science journals recently reported.

In addition, and similar to the efforts by Project DEAL, research institutions and their libraries that collectively pay large sums to the major publishers could unite within or across countries to develop a model whereby institutional subscriptions would also cover publication fees for researchers based in the subscribing institutions using a transparent and fair system.

Another plausible model is that used by the Sponsoring Consortium for Open Access Publishing in Particle Physics (or SCOAP3). SCOAP3 represents a partnership of several funding agencies and research centers, and several thousand libraries in 44 countries; it converts important journals in the field of high-energy physics to OA at no cost for authors or readers.

Retaining affordable options for investigators in developing countries is also critical, as exemplified by some journals that make their content available for free.

Recalibrating the market forces, hopefully with negotiation by the involved parties, is the prudent approach. Also, authors have the option to seek out journals that do not charge excessive fees, while still publishing their work in highly respected journals.

M. Bishr Omary is the executive vice dean for research at the University of Michigan Medical School, where Theodore Lawrence is the chair of the department of radiation oncology. Omary is currently an advisory board member for Cellular and Molecular Gastroenterology and Hepatology and Lawrence is a senior editor for Cancer Research.

The table shows a sampling of biomedical journals and a range of fees per article charged by the publisher to the authors. Pricing was obtained from the listed websites (accessed July 25, 2017).

**Society-published journals typically offer publication discounts to their society members. The listed fees are for nonmembers.
***Elsevier, which publishes Cell, has a wide range of open access charges for their open access and hybrid journals.
#Indicates open access journal. Some of the open access fees include a discount for authors from institutions with a site license.
+Author fees are identical for all American Physiological Society journals that publish original research.