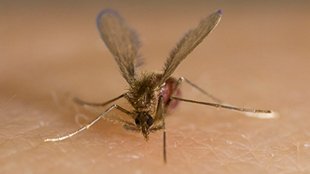 Sand flyROD DILLONGiving sand flies probiotics can reduce their capacity for carrying Leishmania—the sand fly-borne parasite that causes leishmaniasis in humans—according to a study published today (July 23) in Parasites & Vectors. But the research also suggests that flies already infected with Leishmania are protected against infections with other microbes. If true, then using bacterial infection as a way to cull sand flies and reduce the incidence of leishmaniasis could actually backfire.

“[The researchers] show that if they feed sand flies with certain bacteria that are natural components of the sand fly microbiota, the sand fly becomes more resistant to the Leishmania parasite,” said George Dimopoulos, a professor of molecular microbiology and immunology at the Johns Hopkins Bloomberg School of Public Health in Baltimore, Maryland, who was not involved in the work. “That’s interesting and that could have some translational potential too because one could...

Around 12 million people worldwide are currently infected with Leishmania and approximately 50,000 of those will die each year from their infections, estimated Rod Dillon, an insect microbiologist at Lancaster University in the U.K. who led the new research. “But it’s likely to be more than that because the cases are under-reported,” he said.

The deadly forms of leishmaniasis are treatable, “but the drugs involved are relatively toxic and courses can be quite extensive,” said Dillon, “and the best treatments, of course, are extremely expensive.” There’s no vaccine, “so controlling the insect would be quite a good way of trying to stop transmission of the disease,” he said.

The Leishmania parasites reside in the guts of approximately 1 percent of sand flies—those that have ingested a blood meal from an animal or person infected with the pathogen. As an expert on insect gut microbiomes, Dillon hypothesized that tweaking the balance of sand fly gut flora might prevent Leishmania from establishing an infection. Indeed, bacteria found in mosquito and tsetse fly intestines have been shown to decrease viral and parasitic infections in these insects.

Dillon’s team thus fed three-day-old sand flies with commensal yeast and bacteria—microbes normally found in the flies’ stomachs. Four days later, they fed the same flies a blood meal containing Leishmania. Flies that received the commensal microbes—in essence, probiotics—were less likely to be infected with Leishmania than control flies, while those that were infected had fewer parasites in their bellies.

Dillon’s team also performed a reverse experiment: the researchers fed flies the Leishmania first and, subsequently, a pathogenic bacteria. To their surprise, the Leishmania protected the flies from bacterial infection.

However, Dimopoulos disagreed. “I think it is really a stretch to say that the parasite has evolved to provide this protection,” he said.  “It’s more likely that Leishmania, as with all parasites that are transmitted by vectors, will turn on the sand fly’s immune system, which in turn is going to provide some level of protection against any other type of microorganism.”

“It’s not something that is necessarily specific to [Leishmania],” he added.

Whether sand flies and Leishmania have evolved a mutually beneficial relationship, or the protection offered by Leishmania is not, in fact, unique, the message for researchers developing microbial control strategies against sand flies is the same