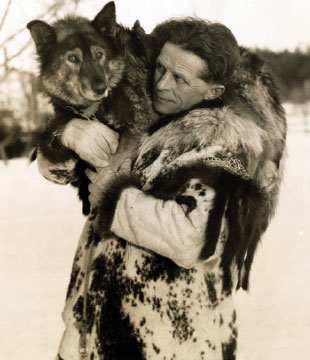 DOG DAYS: Famed sled-dog racer Leonhard Seppala holds his lead dog, Togo. During the 1925 serum run to deliver diphtheria antitoxin to Nome, Alaska, Togo led his pack on a long, harrowing journey across buckling sea ice. To Seppala’s deep ire, another dog, Balto, received glory after the race.PHOTO BY GEORGE RINHART/CORBIS VIA GETTY IMAGESOn a dawnless morning in the winter of 1925, a sled dog named Balto became an American hero. Nome, an Alaskan mining town past its heyday, teetered on the brink of a diphtheria outbreak. Children had begun to succumb to the disease, a bacterial infection that coats the esophagus in a suffocating layer of necrotic tissue. The city’s meager supply of antitoxin serum had passed its expiration date. Desperate, the only doctor in town placed sick children into quarantine and radioed for help.

Boats, impeded by sea ice, did not visit Nome in...

Exhausted dogs died on the snow while their drivers lost fingers and toes to temperatures that sank below –60 °F. Telegrams from rendezvous points along the way kept the American public riveted to this days-long ordeal. Leonhard Seppala, considered one of the greatest mushers and dog breeders in Alaska, drove the hardest and longest stretch, crossing treacherous sea ice in the black of night with his lead dog, Togo, at the front of the pack.

A photographer awaited the last team in Nome, where Gunnar Kaasen stumbled off of his sled and, legend has it, uttered “damn fine dog” in reference to his lead dog Balto, before collapsing from fatigue.

Balto was Seppala’s dog, on loan to Kaasen, and when Seppala toured the country following what became known as The Great Race of Mercy, Balto was lavished with praise. He became a centerpiece in the narrative of American bravery that recounted the events of the serum run. Ten months afterward, a statue of Balto was erected in Central Park.

The press attention galled Seppala. In his view, the papers had the wrong champion. The dog he thought deserved praise, instead of Balto, was Togo. Seppala had been winning races with Togo for years and considered Togo his finest dog, says Laney Salisbury, coauthor of The Cruelest Miles, a history of the serum run. “The dog that always got him through all his trouble,” says Salisbury, “was always Togo.”

Seppala “always gave all the credit to his dogs,” says Helen Hegener, author of a number of books on Alaskan history and dogsledding. He raised Togo from a puppy and devoted exceptional time and attention to the dog, Hegener says. “He took [Togo] everywhere with him.” When the papers covered Balto instead of Togo, “it was like the media was not giving his best friend his due,” Salisbury says.

According to Salisbury, Seppala later commented to his biographer that “in Alaska, our dogs mean considerably more to us than those outside can appreciate. . . It was almost more than I could bear when the ‘newspaper dog’ Balto received a statue for his ‘glorious achievement.’”