ABOVE: An artist's reconstruction of the Tanis site in North Dakota moments after the asteroid strike that caused the Cretaceous mass extinction. Joschua Knüppe

The April shower that took place 66 million years ago did not, in fact, result in May flowers. Rather, when a meteor the size of a small city crashed into Earth near what is now the Yucatán Peninsula in Mexico that spring, it triggered a cascade of events that caused the death of three quarters of all life on Earth. Such is the conclusion of the researchers behind a new study, published today (February 24) in Nature, who analyzed the bones of several fish supposedly killed following the impact and determined that the meteor likely struck during spring in the Northern Hemisphere.

“It’s amazing that we can take an event, a single moment that happened 66 million years ago—literally a rock falling down and in an instant striking the Earth—and we can pinpoint that event to a particular time of the year,” Stephen Brusatte, a paleontologist at the University of Edinburgh who was not involved in the research, tells The New York Times. “I think it’s a detective story of the highest caliber.”

The reception of the new study is tied up in the contentious nature of the site itself: a portion of the fossil-rich Hell Creek formation located in North Dakota. The site, called Tanis, has been controversial since the first paper describing it was published in 2019. Despite a positive reception by the media, the authors were criticized by other scientists at the time for the scant details they provided. It’s only in the last few months that additional studies have fleshed out what supposedly happened at Tanis, which is almost 2,000 miles away from the site of impact.

Melanie During, a graduate student at Uppsala University in Sweden who studies early tetrapods and the lead author of the new paper, first heard of Tanis during a talk in 2017 by Vrije University paleontologist Jan Smit, according to the Times. This was before the site was widely known, when only a handful of researchers were working there. “I actually started typing him an email from my phone from the back of the room, saying, ‘Hey, if you have these fishes, can we please do isotopic analysis on their bones?’”

During traveled to Tanis that year and excavated six fish, including three paddlefish and three sturgeons. In the lab, the researchers shaved thin sections from the animals’ jawbones or pectoral fins and created high-resolution models using a powerful X-ray machine called a synchrotron that provides cellular-level detail. Specifically, the team was interested in the growth patterns of the bone cells; like rings on a tree, the thickness of the bone layers can tell scientists about the conditions the fish were living in. Periods of abundance are characterized by thick lines, whereas lean times, such as the winter months, produce thinner lines known as lines of arrested growth, or LAGs. 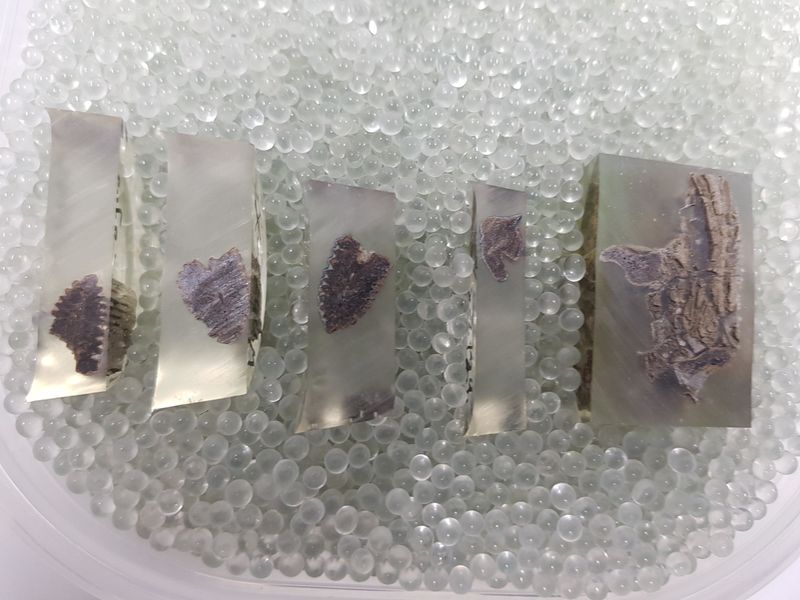 In the current study, During and her colleagues concluded that the fish had died just after beginning a new period of growth, suggesting a time that corresponded with a transition from winter into spring. Isotopic analysis of the bones of one paddlefish, which would have fed on freshwater plankton, similarly suggested that the animal had yet to reach its peak feeding time, which typically occurs in the summer. Taken together, these results add to the “various lines of evidence that we have that these fish perished in spring,” Jeroen van der Lubbe, a paleoclimatologist at Vrije University and one of the authors of the Nature paper, tells the Times.

The researchers also studied the fish to determine not just when but how exactly they might have died. Tanis itself is a chaotic jumble of sediment, trees, and a diverse array of fossils, likely the result of a tsunami-like wave called a seiche sweeping up the river in the moments after impact. “This deposit literally looks like a car crash frozen in place,” During tells CNN. “It looks like the most violent thing I have ever seen, preserved in pristine condition.”

During found that the fish also had small bits of glass called impact spherules or tektites, formed from molten rock cooling as it fell back to Earth, lodged in their gills. They seem to have died before the tektites could make it into their digestive system, indicating that “[t]hey couldn’t swim on,” During tells the Times. “They immediately died.”

The findings might help explain why animals in the Southern Hemisphere seemed to bounce back more quickly than their northern neighbors. Spring in the Northern Hemisphere would have meant that many species were coming out of hibernation, bulking up after winter, and tending young. It would have been autumn on the southern half of the planet—a time when animals begin to hunker down. “If you could seal yourself off in a burrow or if you could shelter underwater, that could help you,” During said at a news conference organized by Nature. Speaking to the Times, Brusatte agrees that pinning the event to one season provides some understanding for “the patterns and the processes of the extinction.”

However, the research has already been criticized by other scientists, particularly over the use of LAGs. One researcher—a postdoc who spoke to Nature and requested anonymity given the contentious nature of the Tanis site—says that “there is no uniform, agreed-upon definition of what a LAG is or how you identify one,” making them skeptical of the team’s findings. But Columbia State University biologist Michael Newbrey, who also uses LAGs to study fish, tells Nature “I think their argument [about the season of death] is convincing,” while Kay Behrensmeyer, a vertebrate paleontologist at the Smithsonian Institution’s National Museum of Natural History, tells Science that the team has “set a really good standard” for dating and analyzing fossils.

During’s work also has much in common with another paper published in Scientific Reports last December by Robert DePalma, a PhD student at the University of Manchester who first described Tanis as a master’s student at the University of Kansas.* Both studies relied on LAGs for their analysis and linked the impact to spring, but neither paper cited the other. During notes that her study was submitted before DePalma’s, even if it was published later, and therefore she didn’t feel the need to cite DePalma’s work. In addition, she tells Science that her team’s use of synchrotron scanning means that their results are even more precise. Speaking to Nature, Depalma says that “similarities in the studies might be expected to some extent when considering that the second study was born from the same site and used specimens on loan from our study area,” adding that the results “complement” and “independently reinforce each other.” 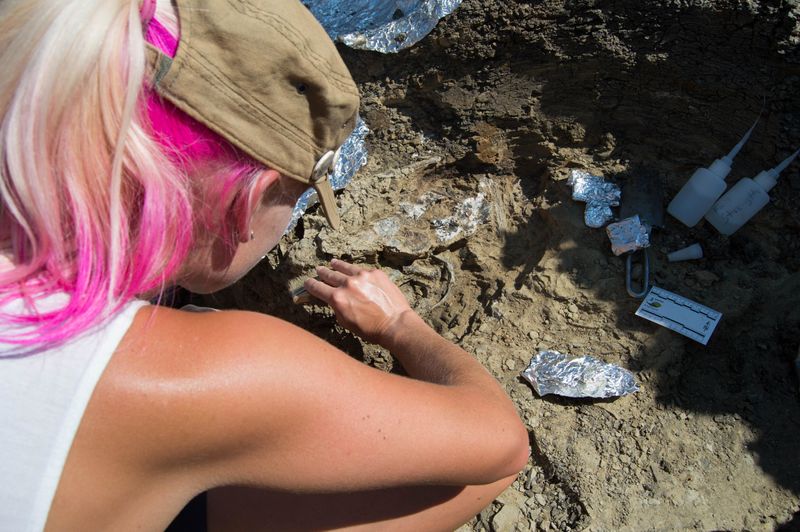 Melanie During excavating a paddlefish at the Tanis site in North Dakota.
Jackson Leibach

*Update (December 7): During and her supervisor, Uppsala University paleontologist Per Ahlberg, have accused DePalma of fabricating data in order to “scoop” her findings in both a letter to Science and a PubPeer comment on DePalma’s paper. According to Science, Scientific Reports is investigating the paper, especially oddities in the figures, which During and Ahlberg had privately noted to the journal shortly after it published the research.