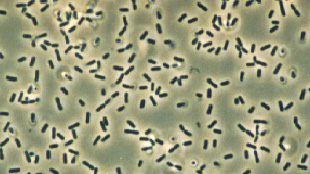 Bacillus subtilisWIKIMEDIA COMMONS, KOOKABURRAAn estimated 2,500 billion metric tons of carbon is stored in the soil, so understanding interactions between the soil and the atmosphere is of critical importance to predicting the impacts of climate change. But determining the extent to which carbon dioxide-fixing microbes within the soil can affect the environment—and vice versa—has proved challenging. Two recent studies have highlighted the difficulties of understanding how soil microbes might respond to climate change and question whether climate models should account for these bugs.

In question are the kinds of feedbacks that can be expected from soil microbes in a warmer climate and the resulting effects on the global stocks of soil carbon. Existing climate models do not explicitly consider soil microbial respiration, as it has been considered too complicated, but some researchers argue that considering the soil microbiome is of critical importance. These microbes could help to...

In a study published in Nature this month (September 3), a team led by investigators at the U.K.’s University of Exeter examined the responses of microbes in soils taken from a range of climatic zones to temperature change.

“We found the strongest effects of microbial community responses in terms of increasing the temperature sensitivity of soil respiration were in soils that have large carbon stocks and are from cold regions which are warming rapidly,” study coauthor Iain Hartley of Exeter told The Scientist in an e-mail. “This potentially increases the vulnerability of these important carbon stocks to climate change.”

Rattan Lal of Ohio State University, who studies soil carbon sequestration but was not involved but said the research, called the paper “very good science and extremely relevant” and noted that the study pointed to a high risk of feedback, as releases of carbon dioxide, from arctic and high altitude soils

Ecologist Daryl Moorhead from the University of Toledo who also was not involved in the work said in an e-mail that the study “clearly showed different patterns in soil microbial community responses to soil temperatures.” However, he cautioned, “the results . . . can only be interpreted within the constraints of [the authors’] study: their soil samples were isolated from their ecosystems, including interacting plants and plant symbionts, and there was little resolution of microbial community structure or biochemical activities.”

As more than half of the total amount of soil carbon is stored in arctic and boreal regions, an increase in carbon dioxide respired by microbes could be a serious problem. But that’s hardly half of the story.

According to a paper published in Nature Climate Change this month (September 7), microbes grow faster and die more quickly in warmer conditions. “Temperature affects microbial activity, and this, in turn, will cause all sorts of changes that may affect microbial growth in the long term. For example, more growth, faster decomposition of organic matter, more depletion of substrate, means possibly less microbial growth in the future,” explained study coauthor Paul Dijkstra of Northern Arizona University in an e-mail.

Study coauthor Steven Allison from the University of California, Irvine found that if he used the observations of microbial growth rate and lifespan found in the experiment in a model of future soil carbon, there would be a slight increase in carbon storage. However, the model also showed that the amount of soil carbon stored or released is significantly affected by the way that the microbes behave.

According to Mark Bradford, an associate professor of terrestrial ecosystem ecology at Yale University who last November penned a Frontiers in Microbiology review on these issues but was not involved in the work, the researchers applied a timely approach, particularly because the models showed how sensitive the overall response would be to different assumptions of microbe responses in a changed climate. And he noted that the Intergovernmental Panel on Climate Change (IPCC) Fourth Assessment Report—from 2007—concluded that there was high uncertainty about the feedback from soil carbon. “In the latest [IPCC] report, many of the model simulations omitted the feedback,” Bradford wrote in an e-mail, “not because the thinking was that it was unimportant but rather because of the high uncertainty as to whether soils would lose or gain C [carbon] and so [would] reinforce climate change or help slow it.”

By incorporating results from additional analyses looking at microbe behavior in a range of conditions and using soil data from long-term experiments, researchers should eventually obtain more precise and useful results.

Still, not everyone believes more complex models are necessary. Peter Smith of the University of Aberdeen, Scotland, questioned the need for additional complexity in the soil models; he said that changes in soil carbon were a “simple balance between decomposition and increased carbon inputs to the soil from increased plant productivity.” In a 2012 Biogeosciences paper, Smith and his colleagues considered soil carbon using standard models—using simulated pools of soil carbon, calibrated for variables such as soil texture, cultivation, and land use—and found that the net amount of carbon in the soil would likely change in many places when the model was run using future climate scenario data.

The debate is therefore about the extent to which the amount of carbon in future soils can be estimated without a detailed understanding of microbial processes. One suggestion is that if the standard models do not account for the way that microbes might change along with the climate, then the predictions of those models could be moot. On the other hand, a lot of work will be needed to validate the ideas behind the microbial models, which will mean that it will take more than a decade before they feature in the main climate models used in IPCC reports.

“We’re showing the old ways don’t seem to work, but we haven’t yet worked out the new way to do it,” said Bradford. “We need to rapidly understand more about microbial responses to climate change if we're to predict the strength of soil C [carbon] feedbacks to climate change.”