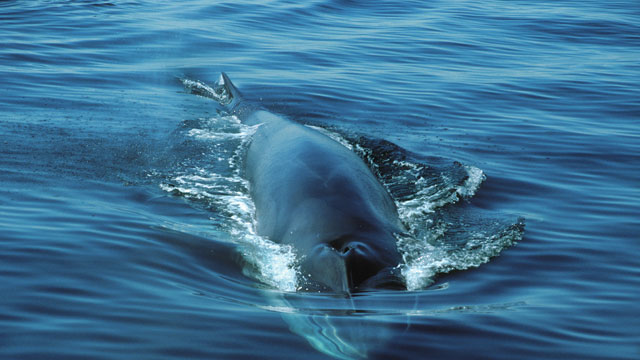 A HEFTY RACKET: A fin whale cruises a 2,180-square-kilometer, federally protected marine sanctuary located at the mouth of Massachusetts Bay in the Atlantic Ocean.© FRANCOIS GOHIER/SCIENCE SOURCEThe call of nature can sometimes sound intrusive to human ears. Squawking birds. Buzzing insects. For marine geophysicist William Wilcock, it was the incessant singing of fin whales (Balaenoptera physalus) that proved most bothersome. Calls of the endangered marine mammals plagued the underwater recordings that Wilcock made to detect tiny earthquakes emanating from the North Pacific seafloor. The squeals and clicks characteristic of the whales’ transoceanic communications virtually drowned out the faint rumbles sensed by the network of seismometers. “The whale calls were a bit of a nuisance,” says Wilcock, “but I had it in the back of my mind that they could be of interest someday.” Indeed, the recordings of the notoriously elusive whales have elucidated aspects of...

Wilcock, a professor at the University of  Washington, first encountered fin whale calls when he was a graduate student at the Woods Hole Oceanographic Institute in the mid-1980s. He spent many late nights listening to analog seismometer data recorded near the Kane fracture zone on the floor of the Atlantic Ocean. Because earthquakes were so rare, he would speed up the tape 75 times and then digitize the recording whenever he heard an earthquake, which, at that speed, sounded “like someone cracking a whip,” says Wilcock.

Occasionally he would hear a series of shorter sounds close to the frequency range of the earthquakes. “Almost like drumbeats—very rhythmic,” he says. The late Bill Watkins, a marine mammal bioacoustic expert who worked at Woods Hole, helped Wilcock identify the repeating sounds as calls from fin whales. The underwater sounds often approached 190 decibels, which translates to 130 decibels in the air—equivalent to the intensity of a jet engine and loud enough to shake the ocean floor.

A quarter century later, while Wilcock was studying seismic activity off the coast of Washington State, he again encountered fin whale calls, this time in large numbers. Wilcock was responsible for a network of eight seismometers drilled into the seafloor on the seismically active Juan de Fuca Ridge. The seismometer network spread across a 50-km2 area—a fraction of the ocean basin–spanning range traversed by fin whales. 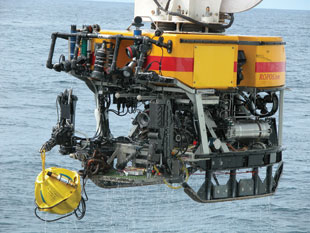 WHALE MICROPHONE: One of the short period seismometers (yellow) that captured the cetacean symphonyMITCHELL ELENDIn the summer of 2004, Wilcock and his team recruited eight high school students to help analyze the first year of seismometer data. That’s when he started to understand how thoroughly the fin whales had infiltrated his seismic recordings. “The whales called thousands of times in a sequence, and then you’re looking for a few earthquakes inside of that—it was very difficult,” says Wilcock, who had to scramble to rewrite his analysis code to filter out the singing whales. “It really slowed the students down, but at that point we realized we had a pretty extensive data set of fin whale calls.”

Fin whales are distributed globally, but they are pelagic, living mostly in the open ocean, far from coastlines. As a result, the marine mammals are still rather mysterious, despite the fact that, at 90 feet long, they are the second longest animals the planet has ever seen, shorter only than the blue whale. Even basic aspects of their natural history, such as the purpose of their powerful calls, are still unknown. “We only see these animals one fraction of a percent of their entire life—when they come to the surface to breathe or when they’re dead, washed up on shore,” says Nicholas Pyenson, a marine mammal paleobiologist at the Smithsonian Museum of Natural History, who was not involved in Wilcock’s research.

So far, Wilcock’s team has been able to triangulate fin whale positions based on the arrival times of their calls at the various instruments. Between the summers of 2003 and 2004, the network captured more than 300,000 whale calls, each of which lasted close to a second, the majority occurring approximately every 25 seconds. Graduate student Dax Soule used the calls to create 154 individual fin whale paths. Based on the spacing between the calls, he deduced that there were three primary categories of whales that migrated south in the winter and north in early spring. Whales swam solo, in pairs, or in large groups that sounded like a “cacophony, with calls just coming one on top of another,” according to Soule.

Another graduate student in Wilcock’s lab, Michelle Weirathmueller, is now wading through the first 2 years of recordings from a network of 70 ocean seismometers known as the Cascadia Initiative, which covers a 640,000-km2 stretch of ocean extending 320–480 km offshore between Vancouver Island, British Columbia, and Cape Mendocino, California. The instruments are too far apart to track movements of individual whales. However, Weirathmueller and Wilcock plan to look for correlations between spatial distributions and satellite-derived ocean parameters such as water temperature, chlorophyll levels, and ocean currents, which indicate abundances of the whales’ planktonic prey. Wilcock says that if they can figure out where the whales’ food sources are likely to be, they may be able to predict the animals’ movements.

“This is a really promising approach and shows that we have to be creative and opportunistic in the way we study the macroecology of these creatures,” says Pyenson.