Using their silk threads as a catapult, members of a family of orb-weaving arachnids rocket themselves and their webs through the air to capture prey.

ABOVE: A slingshot spider prepares to launch its cone-shaped web at a flying insect. To do so, the spider will release a bundle of silk, catapulting both the spider and the web.
LAWRENCE E. REEVES

Leg over leg, a furry brownish-black spider tugs on a single silk thread, tightening the frame of its web. It pulls and pulls, as if removing slack from a slingshot, and then it waits. Minutes pass, sometimes hours. Then, when an unsuspecting insect flies by, the spider releases the thread, springing itself and its satellite dish–shaped web toward its prey. All of this happens in the blink of an eye, with the spider and its web hurtling through the air at more than 4 meters per second (9 miles per hour) with accelerations exceeding 130 g. That’s 130 times the acceleration experienced in freefall, and an order of magnitude greater than that of a sprinting cheetah.

The spider can usually slingshot itself several times before the web is destroyed.

Those eye-watering numbers led Georgia Tech chemical engineer Saad Bhamla to wonder: How the heck are these tiny spiders achieving such fast movements? Bhamla’s lab is “obsessed with ultra-fast motions in biology,” he says, so when he spotted one of these spiders flying past his face a few years ago while he was hiking through the Peruvian rainforest, he knew he had to investigate. He checked the literature and found only a few papers on Theridiosomatidae, the arachnid family comprising spider species that use their webs as slingshots. The papers were decades old and only described the slingshot motion, not the speeds or g-forces the spiders experienced. So Bhamla enlisted the help of his postdoc, Symone Alexander, and together they “went out hunting for spiders in the Amazon rainforest,” Alexander says.

After locating one of the spiders, which measure roughly 2 millimeters in length, the researchers would set up portable high-speed cameras with magnifying lenses to zoom in on and record their motions. Then, either Alexander or Bhamla would snap their fingers to get the spider to catapult itself through the air. Only later did the pair learn that a human finger-snap closely matches the frequency of a buzzing mosquito—and that seemed to be the only frequency that set the spiders’ spring off. “It’s just amazing that we can snap our fingers and get this magical thing,” Bhamla says.

Analyzing the footage, Alexander and Bhamla could watch exactly how the spiders oriented themselves on the tension line at the front of their webs. Facing away from the web, the spider grips its silk net with its four back legs and pulls itself up the tension line with its four front legs, bundling it up in two front appendages called pedipalps as it goes. On sensing the sounds of prey nearby-—most likely via its web, which appears to act like a small antenna—the spider releases the tension line. Although researchers had previously assumed it let go of the silk thread altogether, Alexander and Bhamla’s videos show that the spider in fact only releases some of the line while keeping hold of a part of it with its pedipalps, making it easier to reset its slingshot to trap its next victim. Again and again, the spider captures an insect, wraps it in silk for later, then “comes right back to that tension line and bundles it up again. That allows it to reset and reload pretty quickly,” Alexander says. The spider can usually slingshot itself several times before the web is destroyed.

The speeds and accelerations of this spider are impressive, but so is the fact that, unlike most web-building spiders, it’s actively hunting, Bhamla says. “It’s changed the function of its web,” he says. “Instead of waiting for something to collide with it, the spider is going after things . . . actually catching flying insects in midair.” 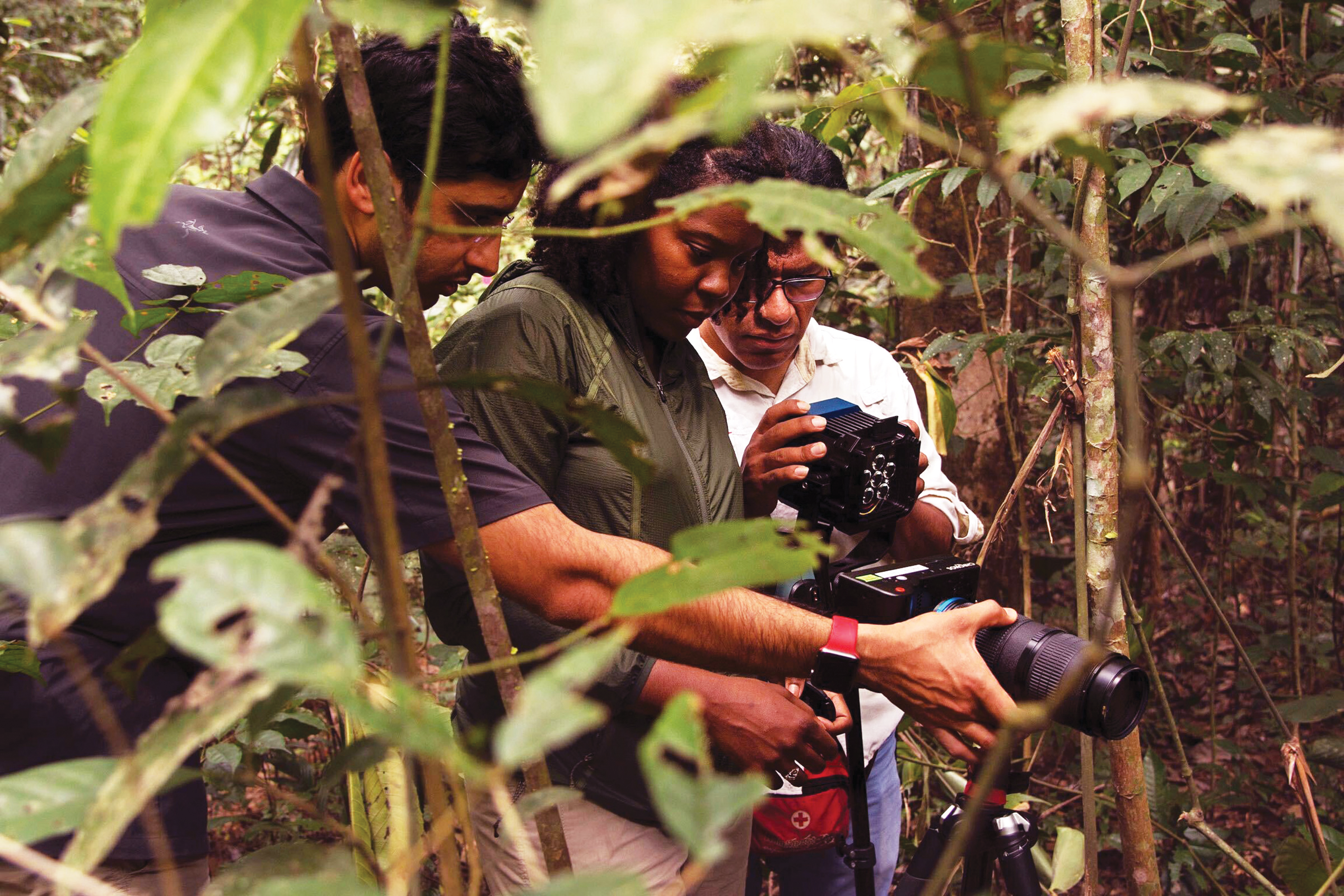 To see the video of this little spider pull on its line, load its web, sense its prey, and then fly through the air to trap it is humbling, says Sheila Patek, a biologist at Duke University who studies tiny spring mechanisms across the natural world but was not involved in this work. “We humans always think we’re the best at everything, and in the natural world, those spiders are doing something that’s pretty difficult.” Other critters, including trap-jaw spiders and mantis shrimp, can move certain appendages such as claws or mouthparts at speeds of 30 to 80 kilometers per hour (20 to 50 miles per hour), she says. But slingshot spiders are using an external tool, a web, to snare their prey, and they’re working at speeds faster than their nervous systems can monitor, so they have to plan ahead and essentially let their spring and latch system control what happens after they let go of the tension thread. “It’s superpower-type stuff,” Patek says.

Instead of waiting for something to collide with it, the spider is going after things . . . actually catching flying insects in midair.

Theridiosomatidae aren’t completely unique in this respect, however. Spiders in the Hyptiotes genus also use orb webs to actively hunt. Hyptiotes spiders move at slower accelerations—a mere 772.85 m/s2, compared with the Theridiosomatidae’s 1300 m/s2—yet they load energy in their webs similarly, then rocket toward prey, unleashing additional silk threads onto their victims to finalize the capture. When the spider stops itself suddenly by clamping down on its tension thread with its legs, the resulting jerk on the web wraps the capture threads around its prey from all directions.

What’s fascinating is the amount of energy the spiders can store in their web and then unleash to catch their prey, says Sarah Han, a graduate student in biologist Todd Blackledge’s lab at the University of Akron. With Blackledge, she wants to investigate how the webbing material, typically thought to disperse energy, can, in fact, store energy, a characteristic that might inform the design of synthetic silk. Han also recently began collaborating with Alexander, who will be starting her own lab at Auburn University in 2021, and Bhamla on Theridiosomatidae, to look at how those spiders have evolved their slingshot systems. Now that high-speed camera footage can offer scientists a frame-by-frame view of what the arachnids are doing, Patek says, “it just opens up a myriad of areas of research in evolution, neuroscience, materials science, and human engineering.”