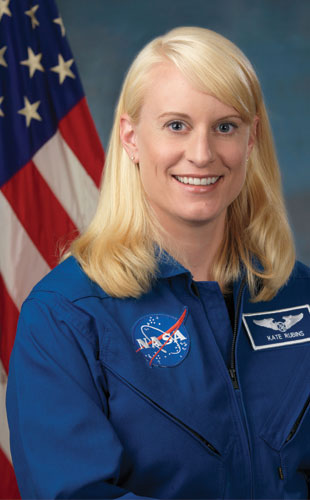 ROBERT MARKOWITZIt was early morning in Kazakhstan on July 7, 2016, when virologist Kate Rubins donned her spacesuit and rode a battered elevator hundreds of feet up the side of an icy rocket—the colossal structure “creaking and moaning” from its load of cryogenic fuel. She entered the new Soyuz spacecraft and endured a rumbly, bumpy launch, headed to the International Space Station, 400 kilometers up.

Rubin’s intense training regimen did little to mentally prepare her for the “controlled explosion” that was the launch, she says. During the next 115 days on the station, after mastering how to pipette water globules in zero gravity and how to keep her equipment from floating away, Rubins cultured cardiomyoctes and, using a portable handheld sequencer, became the first to person to sequence DNA in space.1

The switch from running a laboratory on Earth to performing experiments in space may seem like...

Prior to joining NASA, “Kate spent years in a spacesuit, doing science with joy, enthusiasm, and incredible effectiveness,” says Relman, referring to her graduate work studying smallpox, which required her to wear a protective body suit while working in a biosafety level 4 lab.

In graduate school, Relman tasked Rubins with investigating responses to the life-threatening infections caused by pox, Ebola, and Marburg viruses. She measured gene-expression patterns following infection in macaques and human cells2 to identify distinguishing features that could be useful for earlier diagnosis. Rubins was the first to characterize genome-wide smallpox immune responses in a primate model3 and traveled to the Congo to help the US Army develop a framework for studying monkeypox in children, says Relman.

After earning her PhD in 2005, Rubins continued her virology work and studied other African viruses as a fellow/principal investigator at the Whitehead Institute for Biomedical Research, bypassing a traditional postdoc and establishing her own laboratory. In the midst of her fellowship, Rubins answered a call from NASA for astronauts, taking a chance to live out a childhood dream. “When I was a kid, I really wanted to be an astronaut, a biologist, and a geologist . . . simultaneously,” she says, chuckling. As an adult, however, she didn’t think NASA would take her seriously

But they did. After a lengthy selection process, Kate trained with the Navy where she learned how to fly supersonic fighter jets, how to survive harrowing situations such as an underwater helicopter crash, and how to complete a free-flyer capture—apprehending an incoming spacecraft using the station’s robotic arm—which Rubins describes as akin to pulling a friend out of a car “when you’re both going 17,500 miles an hour.”

In space, Rubins performed two space walks to install key equipment on the space station. NASA astronaut Jeff Williams, her companion on these walks, says she knew how to handle hazardous situations. “I’ve been on board with over 50 people. Kate was among the best of them for first-time flyers.”

At present, as an astronaut and NASA’s former deputy director of human health and performance, Rubins is living two out of her three childhood dreams. “People actually do this as a career,” Rubins says. “An astronaut is a real job, not just something you say you want to be when you’re a kid.”