Prachee Avasthi took a winding path to specializing in studying cilia—the hairlike appendages that enable cells to move about and sense their environments. During her undergraduate days at the University of Illinois at Urbana-Champaign, she did lab work ranging from classifying insects collected from a local pond to probing synaptic plasticity in mice. “Pretty much no matter what type of research I was doing, I really enjoyed it.”

Still, of all the areas she explored as an undergrad, Avasthi, now a cell biologist at the University of Kansas (KU), says she found the brain to be “particularly interesting because it’s so unknowable.” She chose to study neuroscience in graduate school at the University of Utah, and her research focused on specific cilia that help the eye’s photoreceptors detect light. “All of these proteins and the membranes get sort of eaten up by adjacent cells in the distal portions [of the cilia], and then everything needs to be made fresh,” Avasthi says. A huge amount of protein trafficking from the cell body to the cilia therefore has to happen to maintain normal function of these photoreceptors. Avasthi and her colleagues determined that a protein, kinesin-II, is critical to this molecular transport in cone cells.1

To build on that research, Avasthi joined Wallace Marshall’s lab at the University of California, San Francisco, as a postdoc to work on Chlamydomonas reinhardtii, a green alga that is a model organism for studying cilia. Avasthi decided to look for pieces of cellular machinery involved in maintaining cilia. It’s difficult to do targeted gene knockouts in C. reinhardtii, so she instead treated the cells with chemical inhibitors to see which affected the cilia. The cytoskeleton protein actin turned out to be a key player in ciliary transport2—a surprise, since cilia are generally thought to be microtubule-dependent structures.

Since starting her own lab at KU Medical Center in 2015, Avasthi has continued looking at actin’s role in transporting proteins to cilia. David Kovar, a cell biologist at the University of Chicago who has collaborated with her on other work,3 says he was struck early on by “how excited she was about the topic, and the whole process of doing science and the process of discovery.” Her enthusiasm is contagious, he says. Avasthi recently developed a method for visualizing actin within C. reinhardtii—an innovation fellow KU cell biologist Bill Dentler finds particularly impressive. He worked on a similar project years ago but hit a dead end, he says. “She’s basically taken that forward and come up with results that we never really thought of before.”

In addition to her love of the science, Avasthi also values helping other early-career researchers. “When you start your own lab, you’re completely out in the darkness on your own. . . . You have a million questions,” she says. She started New PI Slack, an online community of more than 1,000 assistant professors, so they could advise each other on common challenges. She also serves on boards of eLife and ASAP Bio, where she advocates for the interests of researchers launching their careers. At journals, granting agencies, and other organizations, she says, “having that voice at the table is really important.”

Correction (December 3): The end of the second paragraph originally stated that the finding about kinesin-II was made with proteomics, which is not the case. The third paragraph has been amended to remove references to proteins involved in transport into the cilia, which was not directly measured by the experiments mentioned, and to correct the reason the finding of actin’s role in ciliary transport was a surprise. The fourth paragraph originally stated that David Kovar collaborated with Avasthi on research looking at actin’s role in transporting proteins into the cilia, when in fact he collaborated with her on other work. The same paragraph has also been changed to reflect the fact that Avasthi developed a method for visualizing actin within C. reinhardtii, but not within cilia. The Scientist regrets the errors. 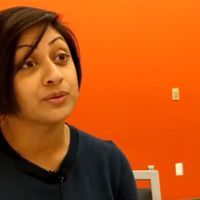