When a woman becomes pregnant, her risk of type 2 diabetes increases for the rest of her life, perhaps because of her growing weight and rising insulin resistance. But if she breastfeeds, epidemiological studies have shown that the uptick in risk shrinks or disappears.

The mechanisms underlying this lactation perk have been unclear, but Michael German, a biologist at the University of California, San Francisco, hypothesized that the pancreas’s beta cells are involved. “For long-term protection over decades, you have to fundamentally change some part of the mechanism that controls blood sugar,” says German. “The best way to do that is by affecting the beta cell, because it makes the insulin.” Insulin helps glucose enter the body’s cells from the blood. But in type 2 diabetes, cells become insulin resistant and thus less able to absorb enough glucose, forcing the pancreas to make more insulin until it can’t keep up and blood sugar rises.

UPPING PRODUCTION: Lactation stimulates cells in the pituitary gland to produce the hormone prolactin 1, which, in mice, binds to beta cells in the pancreas 2. This leads to a signaling cascade that increases the cell’s production of serotonin 3. Serotonin binds to a separate receptor on the beta cells, stimulating them to proliferate and produce more insulin 4, and also serves as an antioxidant that protects cells from free radicals. Researchers propose that these mechanisms explain why women who breastfeed their children have reduced long-term risk of developing type 2 diabetes.
WEB | PDF
© Kelly Finan

In a new study, German and Hail Kim of the Korea Advanced Institute of Science and Technology collaborated with another group in Korea that had recruited pregnant women with impaired glucose tolerance or full-blown gestational diabetes. About half of the women breastfed their babies, and half did not (the study was not randomized). Two months after delivery, lactating and non-lactating mothers had comparable blood glucose concentrations after a glucose tolerance test (though fasting glucose was lower in lactating women), but three and a half years after delivery, women who had breastfed their babies had significantly lower blood glucose concentrations after the test, and, most importantly, better beta cell function than those who did not—something that had not been shown before.

German and Kim had previously demonstrated that beta cells can make serotonin; immunofluorescence now showed that serotonin concentrations within beta cells were 200-fold higher in lactating mice than in non-lactating mice. Through a series of knockout experiments in the animals, the team surmised that prolactin, the hormone produced when humans or mice make milk, binds to beta cells and triggers a signaling cascade that results in serotonin production, which then spurs beta cell proliferation and insulin production. In addition, the researchers found that serotonin in lactating mice acts as an antioxidant, helping keep beta cells healthy.

Erica Gunderson, an epidemiologist at Kaiser Permanente Division of Research in Northern California who runs a large epidemiological study on pregnancy, lactation, and risk of type 2 diabetes, has a few concerns about the study’s human data. Differences in gestational diabetes rates and treatment between the lactation and no lactation groups, as well as the length and intensity of breastfeeding, were not reported, she says, and all these play a major role in type 2 diabetes risk. She adds that “there can be reverse confounding involved, with the diabetes risk factors causing reduced ability to breastfeed, rather than lactation protecting against diabetes.” German says that the two groups had similar baseline characteristics and there was no difference in their glucose tolerance tests during pregnancy.

Despite her reservations, Gunderson says, “I think it’s a very interesting study that provides some new data on [changes in] beta cell function connected with lactation [in humans] that we did not have previously.” 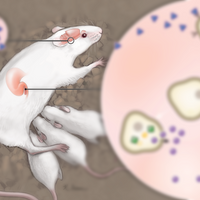