Many flowers emit sweet scents to lure pollinators. Those fragrant molecules can, however, cause damage if they begin to collect in the flowers’ cells.

To escape into the air, a petunia’s scent molecules, called volatile organic compounds (VOCs), have to travel through their cells’ cytoplasm, cross an inner membrane and then the cell wall, and finally move through a waxy cuticle. Scientists long thought that diffusion drove the release of the molecules, but in 2015, computer simulations revealed that VOCs can’t diffuse out of flower cells quickly enough to prevent internal damage to the plant.

In follow-up experiments to find out how the fragrance molecules might escape the plants, Purdue University biochemist Natalia Dudareva and colleagues found that when the flowers opened and became pungent, levels of a protein called PhABCG1 spiked. Dialing down PhABCG1 expression cut the emissions of the VOCs, which started to back up in the flower petal cells, causing the plant cell membranes to deteriorate. PhABCG1 was actively transporting the scent compounds across the membrane, Dudareva and colleagues concluded in 2017. 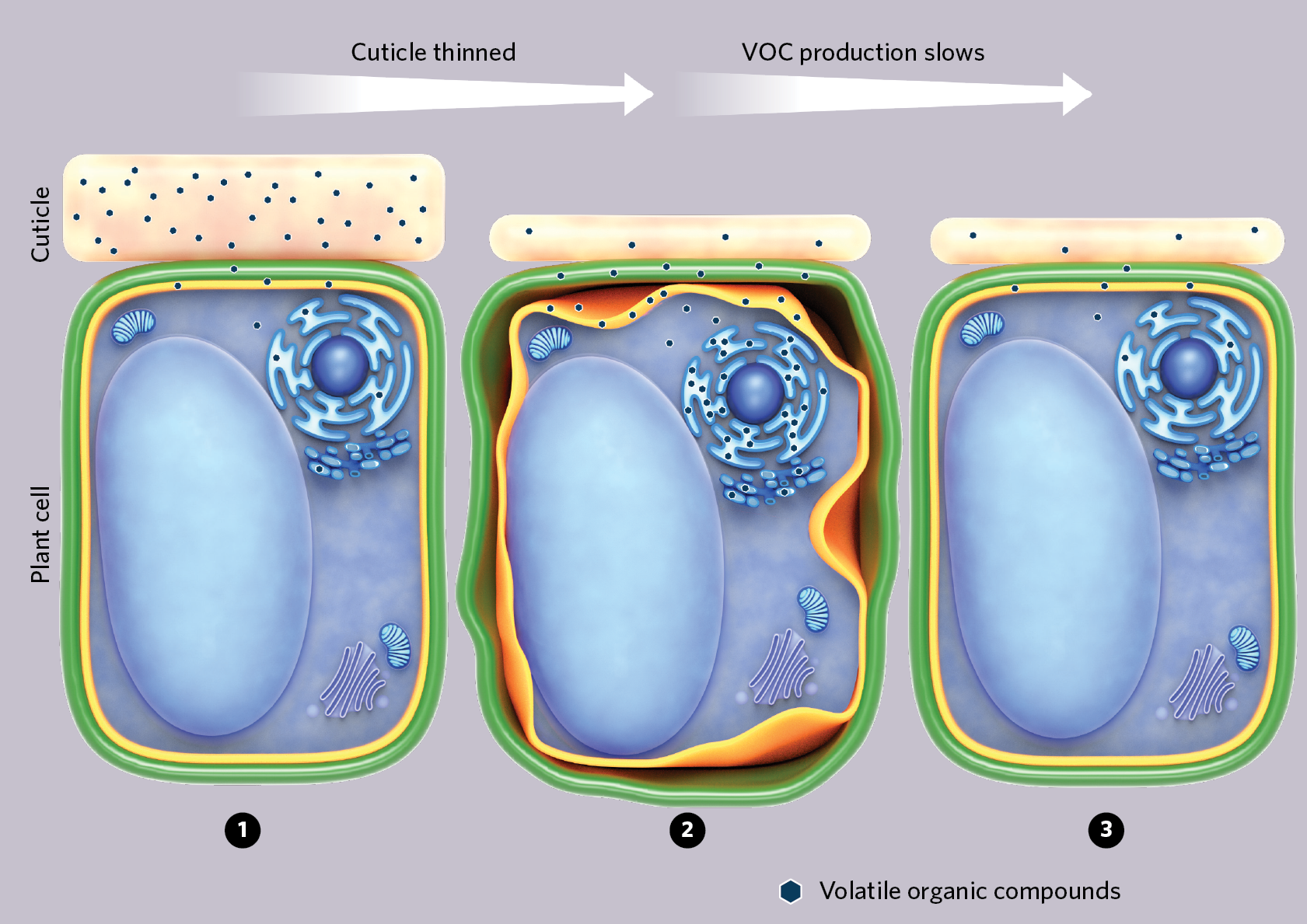 TOO MUCH OF A GOOD THING: Scented flowers owe their smells to volatile organic compounds (VOCs), but a too-high concentration of VOCs in the cytoplasm can damage cells. Normally, VOCs accumulate in an outer layer known as the cuticle, with a few in the cytoplasm (left cell). To examine the cuticle’s role in VOC emission, researchers thinned the cuticles of petunia cells, and found that initially, VOCs backed up within the cell membrane and cuticle, causing damage (middle cell). But hours later, the plants sensed the cell damage and reduced the production of VOCs, leading to lower concentrations in both the cell and the cuticle compared to plants with unaltered cuticles and avoiding further damage (right cell). WEB | PDF
© MELANIE LEE

Tracking the location of VOCs in wild-type petunias’ flower cells, Dudareva’s team noticed that most of them accumulated in the cuticle. This waxy layer that coats the outside of plant cells serves as a sink for roughly 50 percent of a cell’s VOCs, the experiment showed. When the researchers used RNA interference to reduce levels of PhABCG12, a wax transport protein, the thickness of the petunia flower cuticle layer dropped, and then VOC emissions, VOC production, and VOC pooling in the cuticle dropped as well. When the researchers repeated the experiment using a chemical to thin the flower’s cuticle, they got the same result.

“The idea that when you reduce the cuticle, you actually get less emission—that’s totally bizarre,” says Jonathan Gershenzon, a biochemist at Max Planck Institute for Chemical Ecology who was not involved in the study.

Dudareva agrees. As she and her colleagues analyzed their data, it became clear that if the cuticle is too thin, VOCs build up within the plant cells, causing damage. Sensing trouble, the cells somehow dial back VOC production. Taken together, the results reveal that the cuticle plays an integral role in regulating petunia’s sweet scent, the authors write.

Even with that explanation, the results are flummoxing, Gershenzon says. If researchers find a similar phenomenon in other plants, it could give researchers a way to alter volatile emission, and the messages plants send, just by manipulating cuticle thickness, he notes. In addition, the finding raises questions about the signaling going on between the cuticle and the pathways that control VOC accumulation and production. “We know a lot about metabolism and regulation for so many things,” Gershenzon notes, “but for flower volatiles like this, people haven’t thought about how that works.”