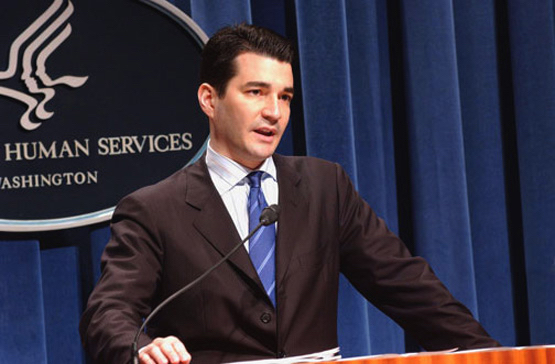 SCOTTGOTTLIEB.COMUpdate (May 9): The US Senate has confirmed Gottlieb as the next FDA commissioner.

Update (March 30): In a letter to the associate general counsel for ethics at the US Department of Health and Human Services dated this week (March 28), Scott Gottlieb outlined his plan for addressing the numerous conflicts of interest he would face if confirmed to lead the FDA. For one year, Gottlieb would recuse himself from FDA decisions pertaining to the nearly two dozen health-care companies he’s worked with, according to The New York Times. In addition, he plans to resign from “his roles in investment banking, venture capital, and as a consultant to drug companies within 90 days of his Senate confirmation,” STAT News reported, and “sell off his shares in a host of biotech companies.” —The Scientist staff

Scott Gottlieb was on Friday (March 10) nominated by the Trump administration to be the next...

Gottlieb is a physician and a health policy expert who served as FDA Deputy Commissioner for Medical and Scientific Affairs from 2005 to 2007, where he loosened requirements for new drug approvals. He is now an assistant professor at New York University School of Medicine, an adviser to the pharmaceutical company GlaxoSmithKline, a resident fellow at a conservative think tank called the American Enterprise Institute, and a board member of several small pharmaceutical companies.

“Scott knows how the agency works and he will move it forwards, though maybe not always in ways the agency is comfortable with,” John Taylor, a former acting FDA deputy commissioner, told Reuters.

“He has good professional credentials and personal integrity, and a track record that shows the ability to make difficult decisions,” Taylor told STAT.

Gottlieb’s financial ties to the pharmaceutical industry have raised questions about his impartiality and his regulatory approach. According to Public Citizen, Gottlieb has received at least $413,000 in consulting and speaking fees from pharmaceutical and medical device companies since 2013.

“He’d clearly need to divest his own stock and resign from the boards,” Diana Zuckerman, president of the National Center for Health Research, told STAT. “Unless he swore on a stack of Bibles that he wouldn’t return to boards, investments, etc., it would be a good example of the ‘swamp’ that [President] Donald Trump promised to drain.”