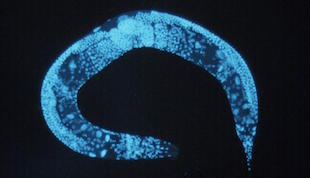 Caenorhabditis elegansWIKIMEDIA, NIHResearchers have uncovered a clue as to why a mother’s mitochondria are passed on to her offspring while the father’s are not. Studying sperm cells from the roundworm Caenorhabditis elegans, researchers at the University of Colorado, Boulder, and colleagues found that a gene called cps-6 encodes a mitochondrial endonuclease that degrades paternal mitochondrial DNA (mtDNA) following fertilization of an egg. Delaying this process can be fatal to the embryo, the team reported yesterday (June 23) in Science.

The research “comes closest to elucidating a key development process that has perplexed us for a long time,” geneticist Justin St. John of the Hudson Institute of Medical Research in Australia, who was not involved in the research, told The New York Times.

Qinghua Zhou of the University of Colorado and colleagues examined the C. elegans cells using electron microscopy and tomography, finding that the paternal mitochondria...

“This provides evidence that persistence of paternal mitochondria compromises animal development and may be the impetus for maternal inheritance of mitochondria,” the researchers wrote in their paper.

It remains to be seen whether the same process occurs in humans, biologist Vincent Galy of the Pierre and Marie Curie University in Paris, who did not take part in the study, told Science News. “You could imagine there’s a similar mechanism, but there’s no demonstration yet,” he said.