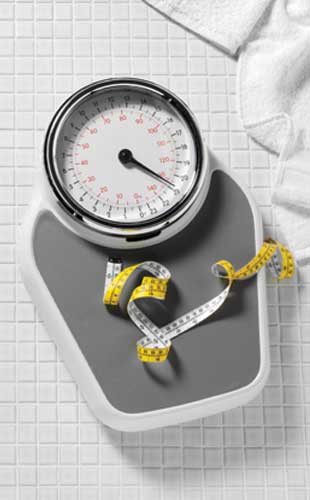 © ISTOCK.COM/WRAGGWithin the past 40 years, obesity has become more common in virtually all age groups in the U.S., and more recently, throughout much of the world. It has become clear, through the calculation of concordance rates in twin-pair and adoption studies, that 25–50 percent of the risk of obesity is heritable, the extent varying within specific environments. And cogent arguments can be made regarding the evolutionary enrichment of our genomes with alleles favoring the conservation of calories.

Body fat, which provides a calorically dense, disposable energy source, is critical to the functional integrity of the reproductive system and to survival in circumstances of caloric deprivation. Studies of weight perturbation in animals and humans indicate that the loss of body fat is defended against more vigorously than its gain. This makes sense if one assumes that we are the products of evolutionary processes designed to optimize survival in...

But human genetic makeup has not changed sufficiently over the past several decades, so to account for recent major phenotypic shifts something (or things) beyond genetics must be playing a role. As in Casablanca, the authorities have dutifully rounded up “the usual suspects.” The guilt (if any) of those implicated—diet quantity and quality, gestational obesity, early feeding practices, fast foods, sugary drinks, amounts and types of physical activity, man-made toxic chemicals, or infectious agents—is difficult to assess because effect sizes do not have to be large to result in energy imbalances that in most instances occur over extended periods of time. Persistent mismatches of 3–5 percent are sufficient. And researchers simply cannot measure either food intake or energy expenditure in humans to that level of accuracy over sufficient periods of time. Studying already-obese individuals is not necessarily helpful, as they are at a point of energy equilibrium, and the major phenotypes associated with their ascent to obesity are by definition not present. We simply do not know what environmental factors account for the increased prevalence of obesity.

A long search for the hypothesized “lipostatic” signal reporting the quantity and metabolic state of fat stores led to the molecular cloning of the ob gene, which encodes the hormone leptin, and db, its cognate receptor. Identification of these genes enabled elucidation of complex neuronal pathways that participate in regulatory and hedonic aspects of the control of eating behavior. The biology of leptin suggests that its primary role is in the regulation of fat stores. Mutations that inactivate the genes encoding components of these regulatory pathways result in severe obesity in rodents and humans, confirming the molecular predicates for the control of body weight, and providing evidence that obesity has biological underpinnings—it is not simply a disorder of willpower and bad habits.

Such evidence is particularly important in providing the obese some relief from still-prevailing notions that body weight, unlike blood pressure, plasma glucose, or cholesterol, is primarily a reflection of personal choices. Exactly why an individual would elect to become obese—given the medical and social consequences—remains unaddressed by those promulgating this outmoded view.

Even though 25–50 percent of the risk of obesity is apparently heritable, much about the genetics of obesity remains unknown. Mutations in the genes involved in the central hypothalamic signaling pathways related to regulatory control of energy homeostasis do not account for most instances of severe human obesity. And genome-wide association studies (GWAS) relating high-density maps of relatively high-frequency (>5 percent) genetic variations with large numbers of individuals characterized for various adiposity-related phenotypes—BMI, body composition, fat distribution—do not implicate allelic variation in many of these genes as major factors in susceptibility to obesity. In fact, these GWAS can account for only a very small fraction (<5 percent) of the apparent genetic contribution to the risk of becoming obese. The majority of the approximately 100 BMI/obesity genes that are implicated in GWAS studies are expressed primarily in the brain.

Whole-exome sequencing is now being applied to find lower-frequency alleles that may account for some of the “dark matter” of the genetics of human obesity. In this context, it is interesting to note that currently the strongest statistical signal for common obesity arises from an intronic variant of the FTO gene. The mechanism(s) by which this variant causes obesity appears to be related, at least in part, to its regulatory effects on other genes in its vicinity on chromosome 16. The implications of such suspected regulatory cascades for any hope of a straightforward elucidation of the genetics of common human obesity are as daunting as new findings beginning to reveal the complex processes driving what and how much organisms eat and drink.

Frustration with the so far very limited success in applying genetic and environmental insights to the prevention and treatment of obesity has led to increasing emphasis on public-health approaches to the problem. These expedients have so far also been only modestly effective, partly due to the lack of understanding of environmental contributions alluded to above. As with coronary heart disease, hypertension, hepatitis C, and AIDS, effective therapies for obesity, and more accurate public perceptions of the disease, are most likely to come from a deeper understanding of its biology. We must not be dissuaded by the difficulty. The medical, social, and fiscal consequences of success will be enormous.

Rudy Leibel is Christopher J. Murphy Memorial Professor of Diabetes Research, director of the Division of Molecular Genetics in the Department of Pediatrics, and codirector of the Naomi Berrie Diabetes Center at Columbia University.