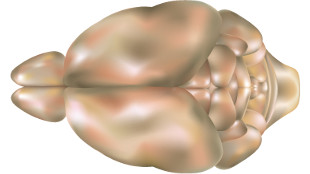 Mouse brain top viewWIKIMEDIA, DATABASE CENTER FOR LIFE SCIENCEThe mammalian brain, long thought to lack a lymphatic system, contains canonical lymphatic vessels that bear the molecular markers of the structures that carry fluid and immune cells from the tissues to the lymph nodes elsewhere in the body, according to a mouse study published today (June 1) in Nature.

“For many years, we said ‘There’s no lymphatic drainage from the brain,’” said Jon Laman, an immunologist at Erasmus University Medical Center in Rotterdam, the Netherlands, who was not involved in the work, “but this, in a way, is a breakthrough study because it shows the presence and functionality of a lymphatic vessel in the dura mater.” Of the meninges, the three membranes surrounding the brain, the dura mater is the one closest to the skull.

“These structures are bona fide vessels—they express all the same markers as...

The relationship between the brain and the immune system has long puzzled researchers. For some time, scientists thought that immune cells only showed up in the brain during an infection. The brain is considered “immune privileged,” such that when exposed to foreign material, it takes longer to mount an immune response than does the rest of the body. Furthermore, to date, traditional lymphatic vessels had not been found there.

Several nontraditional routes of fluid circulation in the brain have been described, however. In recent years, neuropathologists Roxana Carare and Roy Weller of the University of Southampton, U.K., reported a system by which CSF—produced in the ventricles—exits the brain via the mucous membranes of the nose and by which interstitial fluid (ISF)—solute-bearing liquid filtered from the blood—leaves by traveling along the basement membranes of capillaries and cerebral arteries. In 2012, Maiken Nedergaard of the University of Rochester Medical Center in New York and her colleagues reported that the circulation of CSF and ISF in the brain was facilitated by water channels in the glial cells that abut the brain vasculature, and coined the term “glymphatic system.”

The Kipnis team’s latest finding represents an additional lymphatic pathway for the brain. Working in mice, Kipnis and his colleagues found that vessels expressing markers of lymphatic vessels elsewhere in the body ran along the dural sinuses, drainage lines in the brain that collect outgoing blood and CSF, emptying these fluids into the jugular vein. They also found that the vessels contained immune cells.

The researchers also probed the circulatory pathways of these vessels by injecting mice with two different tracers—one intravenously, to the circulatory system, and one into the subarachnoid space, a fluid-filled space between the inner two meninges. The tracer injected into the brain stained the newly discovered lymphatic vessels, indicating that CSF passes through them, while the intravenous dye stained separate blood vessels.

Carare, who was not involved in the study, noted that in a previous study led by Weller, tracer injected into the subarachnoid space traveled to the cervical lymph nodes through the nasal route. “The presence of Evans blue in the present study may be a result of a combination of drainage mechanisms and pathways,” she wrote in an e-mail to The Scientist.

CSF drainage through the nasal pathway “may represent a highly specialized system of the dural lymphatics described in this paper,” Carare added.

While much remains to be worked out, Kipnis noted that, at the very least, these latest results add to mounting evidence of immune activity in the healthy brain. “If you go into the literature, 20 years ago, the idea was that if you see immune cells in the brain, something must be going wrong,” he said. “Now we know that we see immune cells in healthy brains. . . . It’s part of normal physiology; it should be there. Immune activity in the brain is not always pathological.”