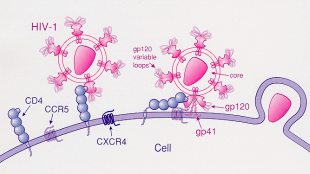 WIKIMEDIA, NIHBroadly neutralizing antibodies, those that could squash a wide swath of virus types, are the supreme goal of HIV vaccine development. Although some people infected with HIV develop these antibodies naturally over time, scientists have not been able to recapitulate them through vaccines developed in the lab. Now, three studies published today (June 18) advance two different strategies for inducing such broadly neutralizing antibodies.

“I think both [approaches] have merit,” said John Mascola, director of the Vaccine Research Center at the National Institute of Allergy and Infectious Diseases, which was a funder of the research. “In the long run, the two could be complementary.”

HIV is not a single virus, but a collection of diverse variants. A practical vaccine, then, would elicit antibodies that recognize a common element among all of them—namely, conserved epitopes of the glycan shield surrounding the virus.

To test whether the trimer could spark an immune response, Moore, along with Rogier Sanders of the University of Amsterdam and their collaborators, administered the molecule, called BG505 SOSIP.664, to rabbits and monkeys.

“They show there’s a real difference,” said William Schief, an HIV researcher at the Scripps Research Institute in La Jolla, California, who is an author on all three studies. “When you use their engineered trimer, they’re able to induce much higher levels of neutralizing antibodies against a particular strain that you built your trimer from, compared to other previous methods of making trimers.”

Although BG505 SOSIP.664 generated potent neutralizing antibodies against HIV, it had a narrow range of viral targets, the authors reported in Science. “It only neutralizes the sequence-matched virus. It doesn’t have the breadth,” Moore told The Scientist. Still, he added, without even a narrow response, there would be nothing to build upon. “It demonstrates the capability of the method for future improvement. So it’s a recipe for design improvement and strategy improvements that have a reasonable chance of going somewhere.”

Mascola, who did not participate in any of the research, said Moore’s study represents the first systematic experiments on a native-looking trimer. “That’s a major advance for this field,” he said. “Now that Moore and Sanders and colleagues have established this ability to make trimmers, there will be in the coming months and year a lot of progress in building on this platform.”

These “germline” antibodies reflect the starting point in the immune response; as an infection continues, antibodies collect mutations that allow them to home in ever more precisely on the conserved elements of a virus (and, therefore, become broadly neutralizing). One vaccine-design strategy would be to mimic this process: begin with a germline-targeting antigen and, with sequential exposures to ever-more-refined antigens, coax the immune system to develop the appropriate antibody mutations to make them broadly neutralizing.

The logic of Schief’s latest study, then, was to see if eOD-GT8 could jumpstart the initial immune reaction. The researchers genetically engineered a mouse to express part of a human antibody predicted to resemble the so-called germline sequence. Much to Schief’s delight, the researchers found that administering eOD-GT8 to the mice generated the antibodies. “We show robustly the germline-targeting antibody that’s supposed to be the first in line does the job,” he told The Scientist.

Meanwhile, a third group, led by Michel Nussenzweig at Rockefeller University and his colleagues, conducted experiments similar to those of Schief’s team, but taking them a step further. The researchers generated a second mouse line that also expressed a human antibody gene, but this antibody contained numerous mutations reflective of an antibody on its way to becoming a broadly neutralizing one.

Like Schief’s group, Nussenzweig’s team also found that eOD-GT8 was effective in starting an immune response by germline antibodies, but, as expected, this response was unable to neutralize HIV. Also similar to the former group’s results, BG505 SOSIP.664 was ineffective at producing an immune response in mice expressing the antibody precursor gene.

But in mice with the almost-mature, mutated antibody, BG505 SOSIP.664 sufficiently activated B cells, the researchers reported in Cell. “When we use the native antigen in [these] mice, we get broader neutralization than if we use the germline-targeting antigen,” said study coauthor Pia Dosenovic, a postdoc in Nussenzweig’s lab.

Study coathor Lotta von Boehmer, an instructor in clinical investigation in Nussenzweig’s group, said the results point to the need for a combination strategy that takes advantage of several antigens. To spark the initial immune activity, she explained, a germline-targeting antigen (such as eOD-GT8) is necessary. Then, at a later stage in the immune response, a native-looking antigen could elicit the broadly neutralizing antibodies required to wipe out the virus. “For the first time, we show in vivo that you will need several antigens to guide the immune response,” von Boehmer told The Scientist.

Schief said eOD-GT8, the germline-targeting antibody, is ready for clinical trials. While a shot of eOD-GT8 is not expected to prevent HIV infection, it could let researchers know whether they’re on the right track. If that initial immunization doesn’t get a reaction, researchers will have to rethink their approach. But if it does set the immune response in motion, they can begin to design the immunogens that would be the next steps in the vaccine sequence on the way toward broadly neutralizing antibodies.

“We think it’s the right time to find that out,” Schief said. His team is meeting with federal regulators in the coming weeks to discuss a clinical trial.

“Both of these approaches have crossed a threshold in the laboratory . . . to provide enough scientific rationale for human testing,” said Mascola.