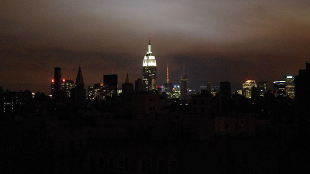 Super storm Sandy caused a blackout across much of lower Manhattan.Wikimedia, David ShankboneFlooding and blackouts caused by super storm Sandy have had a devastating impact on scores of scientists in the Big Apple, with one research center losing thousands of lab mice as well as precious reagents—a situation that could set some researchers back years.

At New York University’s Smilow Research Center, on the eastern edge of Manhattan, which lost power shortly after Sandy struck on Monday night, hundreds of biological samples were destroyed as freezers thawed and refrigerators warmed. And as animal care facilities in the basement flooded, hundreds of mice and rats were killed—animals that had been painstakingly genetically engineered for use as disease models.

“Animal resource staff was on site continuously to mitigate the damage from the storm, but due to the speed and force of the surge, animal rescue attempts were unsuccessful," NYU officials...

Gordon J. Fishell, associate director of the NYU neuroscience institute told The New York Times that his lab alone had lost about 2,500 mice, including 40 different strains. “These animals were the culmination of 10 years of work, and it will take time to replace them,” Fishell told the NYT, which reported a total of some 7,500 more rodents lost from other labs in the Smilow building.

Some mice may be replaceable, especially those shared with collaborators at other institutions. Fishell told Nature that researchers from other universities had already offered to help him replenish his mouse colony. But mice strains and reagents unique to NYU may be lost forever. 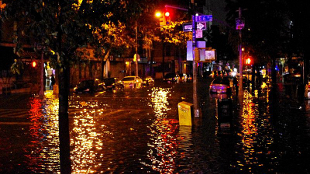 Flooding in the East Village area of New York City, also caused by super storm Sandy.Wikimedia, David ShankboneIn the same building that houses Fishell’s lab, cells and tissue samples stored in lab fridges and freezers were destroyed. The generators in the basement were flooded and thus failed to provide backup power after the electricity was lost. "It's so horrible, you don't even want to think about it," Michelle Krogsgaard, a cancer biologist who runs a lab in the Smilow building, told ABC News. "All the work we did, all the time and money, we're going to have to start all over. We could lose everything we've done since I started at NYU 6 years ago.

The Scientist could not reach anyone at the Smilow Research Center, as the facility seems to have gone off the grid. Emails bounced back with a “delivery failed” error message, and phone calls were answered by an automated message stating that phone and email communication would soon be restored.

Other New York City research institutions are also affected. The generators on NYU’s main campus off Washington Square successfully powered up the building housing the lab of Stephen Small after it lost power Monday night, but campus was “otherwise deserted,” according to one of Small’s postdocs.

And though Kyu Rhee’s lab at Weill Cornell Medical College was largely unaffected by the storm, his work was significantly impeded when he was forced to evacuate his home in Bergen County, New Jersey, after a tree fell onto the roof. Once the storm had passed, Rhee and his family had to drive around streets trying to find a place to stay. He is currently moving from hotel to hotel with his wife and two young children, he said, until they find more permanent accommodation.

For now, Rhee is operating his lab “remotely via intermittent Internet access as I can find it in McDonalds or other coffee shops,” he said. This situation “has made impending grant and progress report deadlines considerably more challenging to navigate,” he said, and has “delayed the submission of time-sensitive manuscripts.” It also made it difficult to coordinate interviews with reporters about his new Science paper on the unexpected mechanism of a tuberculosis drug, just released this afternoon.

Furthermore, Sandy’s impact on science wasn’t limited to the Big Apple. Down in Baltimore, for example, scientists formed a human chain to take cages containing lab mice to safety as floodwaters filled the basement of the Koch Cancer Research Center at Johns Hopkins University, according a report in ScienceInsider.

Even the publishing side of scientific research was affected by the storm. Nature Publishing Group, for example, lost power at its New York office, disrupting its typical publication schedule. “Some journal issues have been delayed this week but we expect to get these out next week alongside the normal issue publication schedule,” a spokesperson for Nature told The Scientist.

To help victims of Sandy, scientists or otherwise, you can donate to the Red Cross. Visit www.redcross.org, call 800-Red-Cross or text the word "Redcross" to 90999 to make a $10 donation. Other ways to help are listed here.