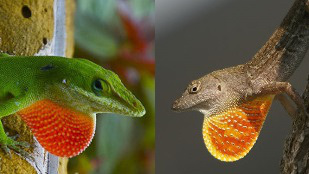 Male Carolina anole (left); male brown anole (right)WIKIMEDIA, R. COLIN BLENIS (L), HANS HILLEWAERT (R)For most of its existence, the Carolina anole (Anolis carolinensis) was the only lizard in the southwestern U.S. It could perch where it wanted, eat what it liked. But in the 1970s, aided by human pet trade, the brown anole (Anolis sagrei)—native to Cuba and the Bahamas—came marching in. In experiments on islands off the coast of Florida, scientists studying the effects of the species mixing witnessed evolution in action: the Carolina anole started perching higher up in trees, and its toe pads changed to enable better grip—all in a matter of 15 years, or about 20 lizard generations.

“It’s a cool paper and I am excited by it,” said Daniel Simberloff, a professor of ecology at the University of Tennessee, Knoxville, who was not involved in the study. “It confirms a couple of theories that I’ve been interested in: rapid evolution and character displacement.”

When closely related species compete, they may evolve to become different from one another. Called “character displacement,” this process can result in evolutionary changes that reduce further interactions between the species. A. carolinensis and A. sagrei have similar ecologies and occupy similar habitats—they both live on trees and eat insects. So it was no surprise that both were changed by their meeting.

Spoil islands in the Mosquito Lagoon off the coast of Florida, a byproduct of dredging in the area to make the Intracoastal Waterway in the 1950s, served as the prime site for this experimental evolution study. By the 1990s, flora and fauna from the mainland—including the Carolina anole—had colonized the islands. In May 1995, Todd Campbell chose six islands with resident populations of the Carolina anole and recorded the height at which the lizards were perched. He then introduced small populations of the brown anole to three of the islands, leaving three land patches undisturbed.

“We had two predictions: one, that perch height would be higher for the Carolina anole in areas where the brown anole was found; two, that there would be an evolutionary consequence to this behavior modification,” said Stuart, who at the time of the study was a PhD student at Harvard University.

The brown anole populations grew rapidly. By August 1995, after just three months, the Carolina anoles began perching at greater heights. On the control islands, however, the Carolina anole was making full use of its typical habitat: the entire tree, from the ground to the crown.

Previous studies had shown that anoles that perch at elevated heights have more adhesive toepads because they have more lamellae, grooves that allow the digits to stick better to surfaces. In 2010, Stuart went about counting lamellae on the longest digits of the Carolina anoles, the fourth toe of each hindleg. He found that Carolina anoles living on the islands where brown anoles were introduced had larger toe pads and more lamellae.

To rule out phenotypic plasticity, the researchers sought to establish whether the larger, stickier toepads were passed on to the next generation. So the team collected gravid females from four invaded and four non-invaded islands in 2011, raising their offspring in identical conditions. The larger, stickier toepads persisted in the lab-bred offspring conceived on the invaded islands.

“The evidence for an evolutionary change surprised me,” said Stuart.  “The pace at which the change was happening surprised me even more.”

“This elegant study adds to a growing body of evidence that evolutionary changes can occur very rapidly, on timescales that we once regarded as far too brief for significant adaptation,” Rick Shine, an evolutionary ecologist at the University of Sydney, who was not involved with the study, told The Scientist in an e-mail.

“Ironically, this new paradigm has come from studies of invading species, organisms that we usually treat as terrible ecological problems,” added Shine.  “Because invaders encounter strong evolutionary forces in their new homes, and impose equally strong pressures on the native species already there, they can experience—and induce—remarkably rapid adaptive changes.”

Correction (October 24): This article has been updated to reflect that it has been around 15 years since brown anole invaded the Carolina anole habitat, not 10 as originally reported. The Scientist regrets the error.