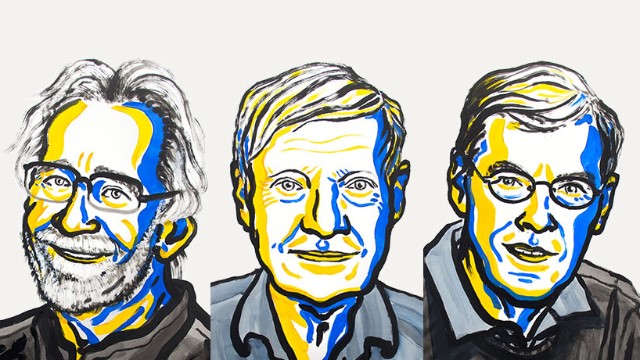 Jacques Dubochet, Joachim Frank, Richard HendersonNOBEL MEDIA. III. N. ELMEHEDThe Nobel Prize in Chemistry was awarded this morning (October 4) to three scientists who developed cryo-electron microscopy, a method that allows scientists to freeze biomolecules and view them at atomic resolution. Using this technique, researchers have been able to study the structure of a variety of biological molecules, from proteins involved in circadian rhythms to the Zika virus.

Jacques Dubochet, Joachim Frank, and Richard Henderson were announced the winners by the Royal Swedish Academy of Sciences in Stockholm. “I think that this discovery that’s being recognized has huge potential and is broadly applicable across all scientific disciplines,” says Allison Campbell, the president of the American Chemical Society.

Henderson, a professor at the Molecular Research Council (MRC) Laboratory of Molecular Biology in the U.K., produced the first high-resolution model of a protein, bacteriorhodopsin, using... 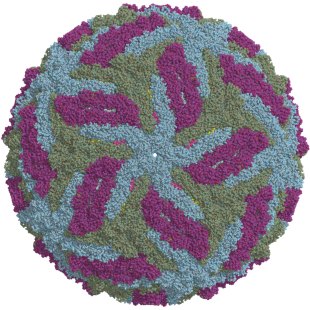 Depiction of Zika virus cryo-EM structureWIKIMEDIA, STARLESSLast year, Henderson won the Royal Society’s Copley Medal, the world’s oldest scientific prize, for his work on imaging techniques. In addition to being a remarkable scientist, says Gebhard Schertler of the Paul Scherrer Institute in Switzerland, Henderson is also an excellent mentor. “Richard was always good in getting younger people to develop their own careers,” says Schertler, who also completed his postdoc with Henderson.

Technological advances by Dubochet and Frank made atomic-level resolution imaging with EM possible. Dubochet, a biophysicist at the University of Lausanne in Switzerland, advanced electron microscopy toward cryo-EM in the 1980s, when he applied a vitrification technique to samples, allowing them to be rapidly frozen in a way that would not allow water to disturb the electron beams used to create the images. He published the first images of viruses suspended in water with this technique in 1984.

“This was a key moment for the field—in the early 80s—and was a huge technical achievement,” Neil Ranson, a professor of structural molecule biology at the University of Leeds, writes in an email to The Scientist. “It underpins every [cryo-electron microscopy] experiment since.”

In the mid-1980s, Frank, a professor of molecular biophysics and biological sciences at Columbia University, developed algorithms that allowed scientists to enhance EM by merging two-dimensional images into higher-resolution, 3-D structures. He used this technique to model the surface of the ribosome, the cell’s protein synthesis factory. During a press conference following the announcement, Frank told the audience that these are some of the most extraordinary molecules he has ever seen with this method. 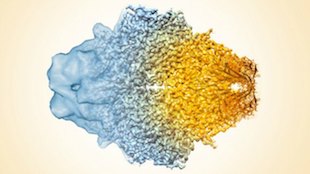 Composite image of a low-resolution cryo-electron microscopy (cryo-EM) density map, 2.2 Å resolution map, and fitted atomic coordinates for the enzyme beta-galactosidase, demonstrating the gradual increase in quality of the cryo-EM structures from low to high resolution.NATIONAL CANCER INSTITUTE, VERONICA FALCONIERI, SRIRAM SUBRAMANIAM“[Frank] is an extremely visionary person when it comes to the technical and theoretical aspects of structural biology and [cryo-electron microscopy] in particular,” says Måns Ehrenberg, a professor at Uppsala University and one of Frank’s longtime collaborators. “I am very happy—I think this [prize] is something that he really deserves.”

“The CryoEM field has taken enormous strides forward in recent years, and the three winners each have underpinned this revolution in the structural biology field. The field has been expecting this in a ‘when, not if’ kind of way for a while” Ranson writes. “It really is a perfect prize and thoroughly well deserved.”