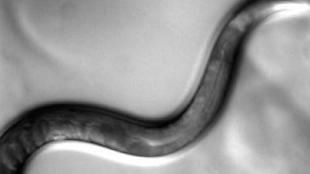 UC SAN DIEGO SCHOOL OF MEDICINEOver the past five years, optogenetics—a method for stimulating genetically engineered neurons with light—has taken the life sciences by storm. Now researchers also have the option of engineering subsets of neurons and activating them with ultrasound, according to a study published today (September 15) in Nature Communications. Researchers from the Salk Institute for Biological Studies in La Jolla, California, have used the method, dubbed “sonogenetics,” to control the movements of nematode worms.

Study coauthor Sreekanth Chalasani, a molecular neurobiologist at the Salk Institute, explained that sonogenetics will complement optogenetics, as sound can travel deep into the brain unimpeded while light scatters when it hits opaque tissues. People using optogenetics in mammals, for instance, must surgically insert a probe, whereas stimulation with ultrasound will require no such surgery. “This is noninvasive,” Chalasani said.

“It’s the first demonstration of this genetic enhancement of...

“It’s an awesome study because it really opens up new possibilities for how we modulate biology,” said Jamie Tyler, a neuroscientist at Arizona State University who led the first group to directly stimulate neurons with ultrasound in 2008. “It shows the mechanical sensitivity of ion channels and that you can use ultrasound to directly perturb a neuronal circuit in an intact organism.”

In the past, other groups used relatively high-pressure ultrasound to stimulate cells, which ran the risk of damaging them. Chalasani and his colleagues decided to use low-pressure ultrasound waves and engineer only a subset of cells to respond to them. The researchers took advantage of mechanosensitive channels found in the nematode worm Caenorhabditis elegans. The worms ordinarily use these neuron-embedded TRP-4 channels to sense when their bodies are stretching. When the worms stretch, the channels open and allow calcium to flow through.

The team hoped to engineer small groups of worm neurons to express TRP-4 channels and then to open the channels through the mechanical force of ultrasound waves, while allowing non-engineered neurons to remain unperturbed. But the researchers found that their low-frequency waves caused such small mechanical deformations that worms could not detect them. They then decided to change the acoustics with 2- to 6-micron gas-filled lipid microbubbles. “Depending on the size of the bubble, they resonate at the frequency of the ultrasound transducer,” Chalasani said. By surrounding worms with these bubbles, which can rest on the surface of an agar plate, the researchers were able to amplify ultrasound waves and activate neurons.

The researchers added TRP-4 channels to neurons known to make worms reverse directions and were able to influence the worm’s movements by stimulating those neurons with ultrasound. They next decided to try out sonogenetics in a set of poorly understood worm cells called PVD neurons. The researchers found that stimulating these neurons reduced the likelihood that the animals would change directions.

Finally, the researchers tested whether they could use sonogenetics on neurons 25 microns beneath the worms’ cuticles. They used calcium imaging to show that the engineered neurons lit up when stimulated with sound.

The team is now working on adapting its technique for use in mice. Chalasani noted it may not even be necessary to use microbubbles to amplify the sound waves. “We expect that perhaps because the mammalian brain is bigger, the deformation might be sufficient to cause the neuron to detect it,” he said. Or, if the researchers do end up needing to use microbubbles, they may inject them into the mouse bloodstream. The bubbles should travel into the tiny blood vessels of the brain. In this case, each neuron should be within 20 microns of microbubbles-filled capillaries.

The researchers would like to see sonogenetics used on humans down the line, perhaps as a less invasive form of deep-brain stimulation. The researchers will need to figure out how to genetically engineer human cells safely to express mechanosensitive channels. And if microbubbles are necessary for amplification, the team will have to establish their safety. The bubbles dissolve after about an hour in blood vessels. But Baccus warned that sometimes microbubbles undergo a phenomenon called inertial cavitation, in which they expand and damage tissue.

Baccus added that, while genetically modified cells respond more markedly to ultrasound, the amplified ultrasound waves also do appear to affect some other neurons. “It’s not he same thing at this point as optogenetics, where it’s really an all-or-none thing,” he told The Scientist.

But sonogenetics has taken a large step in its path to maturity. “This is the first paper that shows, ‘Look, you really can directly modulate ion channels using acoustic pressure,’” said Tyler. “I think it will probably lead to even more people going into the field.”