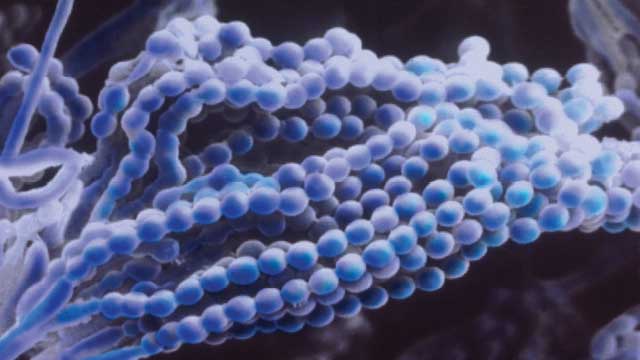 At a workshop held at the National Institutes of Health  (NIH) last September on the role of human microbiota in infectious disease, I was disheartened not to hear a single talk on the fungal community—the mycobiome. Disheartened, but not surprised. Ignoring the fungal kingdom is nothing new. More than five years ago, my colleague and I tried to draw attention to this issue in a letter published in Microbe, recommending that the Human Microbiome Project should investigate not just people’s bacterial inhabitants, but the fungal and viral commensal communities as well. While research on the human virome has increased in recent years, the scientific community has not heeded our advice with regard to the fungal components of the microbiome. As of November 2015, only 269 of more than 6,000 Web of Science search results for the term “microbiome” even mention “fungus,” and the scientific search engine...

Despite this lack of attention, a handful of recent studies point to the importance of our commensal fungal inhabitants as critical players in human health and disease. The oral mycobiome of HIV-infected patients differs from that of uninfected controls, for example. Abundance of Candida and Saccharomyces species correlates with increased severity of hepatitis B infections. And an overabundance of the gut fungal pathogen Candida tropicalis aggravates inflammatory bowel disease. As widespread surveys of the mycobiome become available, such correlational data can be further explored by experimental manipulations in the lab. One day, perhaps, researchers will include fungal species in fecal transplants to treat infections by Clostridium difficile and other bacteria, and companies will begin to market probiotic products that contain live cultures of friendly fungi.

Characterization of the human mycobiome 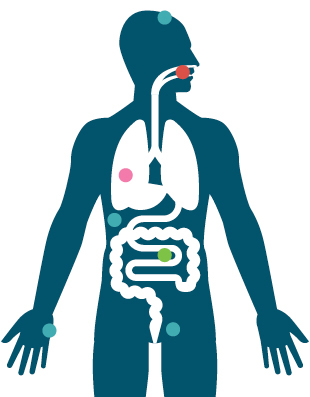 THE HUMAN MYCOBIOME: Diverse fungal species live in and on the human body. Preliminary surveys have revealed several pathogenic species that may increase one’s risk of disease when the healthy microbiome is disrupted.
See full infographic: WEB | PDFAspergillus: MEDMYCO/WIKIMEDIA COMMONS; Candida: MICHAEL FRANCISCO/FLICKR; Fusarium: CDC/DR. LIBERO AJELLO; Malassezia :CDC/DR.LUCILLE K. GEORGIn 1974, my master’s advisor handed me a paper showing that rabbits treated with antibiotics to kill bacteria or with anti-inflammatory steroids to suppress the immune system developed the fungal infection candidiasis, commonly known as thrush.1 It made me realize that not only could fungi in the environment negatively impact our health, but fungal species also inhabit the mammalian body, alongside diverse commensal bacteria. And when one microbial community is knocked out, another can cause illness. If the communities are undisturbed, however, the fungal inhabitants appear to be harmless or perhaps even beneficial.

The medical mycology community didn’t attempt to define the fungal component of the human microbiome until 2010. My colleagues and I found a complex fungal commu­nity in the human oral cavity that went beyond Candida and Saccharomyces, fast growers that can be easily cultured. Across 20 volunteers, we identified 101 fungal species, each person harboring between 9 and 23 fungal species in their mouth. To eliminate transient fungi, we considered the core mycobiome to be those organisms that were present in at least four participants (20 percent of the population studied). This core included 15 genera, of which Candida species were the most fre­quent, followed by Cladosporium (a known allergen and trigger for asthmatic attacks), Aureobasidium (which can cause fungal infections in solid-organ transplant recipients), and genera of the order Saccharomycetales (which includes beneficial species, such as Saccharomyces boulardii, which has been suggested as a potential probiotic).2

We also found several pathogenic fungi, including Aspergillus (which can cause invasive and devastating fungal infections), Fusarium (which can cause superficial and systemic infections that are difficult to treat), and Cryptococcus (a major cause of meningitis in AIDS patients). These pathogens may render individ­uals at increased risk of infection, espe­cially if the host immune status is compromised, though such a link has yet to be demonstrated experimentally. Of the species we identified, more than a third could not be cultured, making it difficult to study their roles in health and disease.

Investigators have started to look at the fungal communities residing in body sites other than the oral cavity. In 2012, a team in Japan profiled the distribution of Malassezia species, which can lead to a superficial skin disease, in the external auditory canal and on the sole of the foot. M. slooffiae, known to cause skin discoloration, was the most common species in both body sites, followed by M. restricta, which predominated in scalp dandruff. Despite some similarities to the mycobiomes of other body sites, however, the researchers found distinctive Malassezia communities present in the outer ear canal and on the sole.3

In 2013, Keisha Findley of the National Human Genome Research Institute and other NIH researchers characterized the mycobiome of the skin, which varied depending on the body part sampled.4 On 10 healthy adults, the research team found that fungi of the genus Malassezia dominated 11 torso and arm sites, while greater diversities of fungal genera were observed on the plantar heel, toenail, and toe web. Importantly, the researchers showed that while bacteria were grouped based on whether the skin was sebaceous, moist, or dry, the fungal community appeared to be determined by location—foot, arm, head, or torso.

Most recently, a group of French researchers characterized the mycobiome in the lungs and reported that environmental fungi such as Aspergillus dominate in healthy people.5 The lungs of patients with cystic fibrosis, pulmonary fibrosis, and other lung diseases, as well as of those suffering from cardiovascular disease or who had received a lung transplant, were dominated by Candida species such as C. albicans.

Collectively, these and other surveys have demonstrated the presence of diverse fungal communities throughout the human body, and suggest their importance in health and disease. 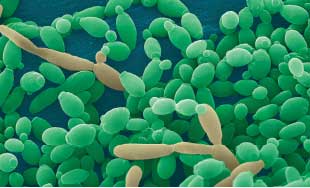 TWO-FACED FUNGUS: Candida tropicalis, a common species of the mammalian mycobiome, can exacerbate symptoms of inflammatory bowel disease in mice lacking the dectin-1 pattern recognition receptor typically found on the surface of innate immune cells.© WIKIMEDIA COMMONS/DJSPRINGIn 2014, to go beyond listing the fungal species found at various sites in the body and move towards mechanistic studies, my lab conducted an analysis of fungal-fungal and fungal-bacterial interactions in the oral cavity of HIV-infected patients.6 Among diverse microbial interactions, we discovered an antagonistic relationship between Pichia, a nonpathogenic yeast used as a biocontrol agent to protect crops from fungal growth, and pathogenic Candida: a decrease in Pichia abundance coincided with an increase in Candida colonization.
Growing these species in the lab, we found that Pichia released a growth inhibitory agent into culture media that was capable of limiting the growth of Candida, Aspergillus, and Fusarium. Moreover, adding Pichia cells or the medium they had been grown in (Pichia spent media, PSM) to Candida cultures significantly inhibited biofilm formation. And when immunosuppressed mice were challenged with C. albicans, those treated orally with PSM developed more-benign oral infections and had a decrease in the number of fungi invading the tongue mucosal tissues compared with untreated mice.6

Looking more closely at the fungal growth in PSM-treated mice, we found fewer hyphae growing on their tongues, and their oral mucosa appeared intact. Control mice, on the other hand, showed evidence of extensive fungal invasion of the tissue. Identification of the active Pichia component responsible for the inhibition of these pathogenic fungi is currently under investigation; preliminary studies suggest that it is a protein.

Fungal species inhabit the mamma­lian body, alongside diverse commensal bacteria. And when one microbial community is knocked out, another can cause illness.

Recent work has also pointed to the importance of the mycobiome in gastrointestinal health. In 2008, Stephan Ott of Christian-Albrechts-University and the University Hospital Schleswig-Holstein in Kiel, Germany, and colleagues found that the fecal fungal community in patients with inflammatory bowel disease (IBD) was substantially different from that of healthy controls.7 And in a mouse model of colitis, David Underhill’s group at the Cedars-Sinai Medical Center in Los Angeles found that dectin-1, a pattern recognition receptor present on the cell surface of innate immune cells (e.g. macrophages, neutrophils, and dendritic cells) that mediates the biological effects of fungal wall polysaccharides called glucans, significantly influences the animals’ IBD symptoms.8 Specifically, Underhill and his colleagues found that mice deficient in dectin-1 suffered increased weight loss, histological alterations, and production of proinflam­matory cytokines compared with wild-type mice. Additional testing demonstrated that Candida tropicalis, a dominant species in the gut of wild-type mice, exploited the lack of dectin-1, and that treatment of dectin-1–deficient mice with the antifungal fluconazole attenuated disease severity.

Disruptions to the mycobiome can also exacerbate graft versus host disease (GVHD), a complex and multidirectional process that involves interactions between the host innate immune system, the gut micro­biota, and donor T cells. In 2000, Kieren Marr, then at the University of Washington and the Fred Hutchinson Cancer Research Center, and colleagues were among the first to show an association between treating candidiasis and improvement of GVHD. Specifically, they showed that bone marrow transplant patients undergoing long-term fluconazole treatment had decreased gastrointes­tinal GVHD, persistent protection against Candida infections and candidiasis-related death, and improved survival.9

Ten years later, Walter van der Velden of the Radboud University Nijmegen Medical Center in the Netherlands and colleagues examined whether Candida colonization and dectin-1 function had an effect on the development of GVHD through a retrospective analysis of patients who had undergone allogeneic stem cell transplanta­tion.10 The patients had been evaluated for Candida colonization in fecal and mouthwash samples. Van der Velden’s group found that Candida-colonized patients had a significantly higher rate of severe acute GVHD than those that were Candida free, and that colonization was the only factor they looked at that was associated with GVHD; stem cell source and the method by which the researchers depleted T cells had no significant impact. When treated with fluconazole, patients colonized with Candida had a lower likelihood of developing GVHD.

The composition of the human mycobiome may also influence much more common diseases, such as obesity. Last year, a group in Spain reported that the fungal community of obese people has an increased abundance of fungi belonging to the phylum Ascomycota, classes Saccharomycetes and Tremellomycetes, and families Dipodascaceae and Saccharomycetaceae compared with non-obese subjects.11 There was also a tendency towards decreased fungal diversity in obese individuals, which is consistent with published data on bacteria. Alterations in the mycobiome of obese subjects seemed to be associated with higher amounts of body fat and related metabolic disorders such as insulin resistance, high blood pressure, and inflammation. 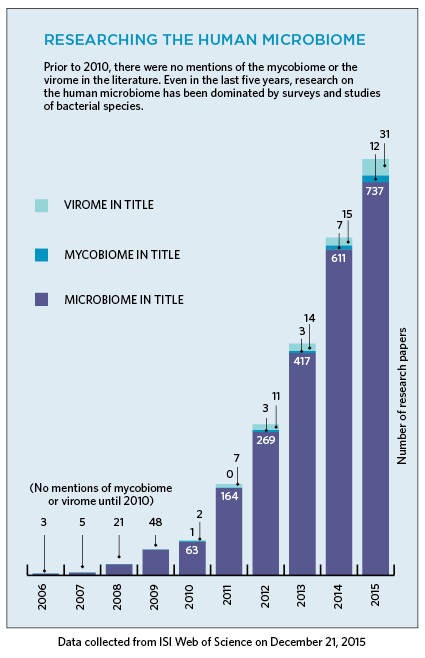 The researchers found that Mucor was the most prevalent fungal genus in non-obese participants, and that the relative abundance of Mucor increased after weight loss in obese patients. Researchers have reported similar results with regard to Bacteroidetes bacteria, which tend to be associated with weight loss. The new finding may point to the potential use of Mucor with or without Bacteroidetes to combat obesity. Notably, similar to our findings of an antagonistic relationship between Candida and Pichia in the oral mycobiota of HIV-infected patients, the French group that surveyed the lung mycobiome found a significant negative association between the families Pichiaceae (which includes Pichia), and Dipodascaceae (which includes Candida) among nonobese subjects.5

Given that the field of mycobiome research is so young, these examples are undoubtedly but a few of many diseases in which our commensal fungi play significant roles. Already, additional links have been found between the fungal community and at least two such conditions, atopic dermatitis12 and allergic responses in the lung.13

Clearly, the human mycobiome has an influence on both health and disease. The scientific community must adopt an all-inclusive characterization of the human microbiome going forward; studies that focus solely on bacteria are myopic and doomed to failure, and they squander precious research funds.

Mahmoud Ghannoum is the director of the Center for Medical Mycology at Case Western Reserve University and University Hospitals Case Medical Center and a tenured professor in the Department of Dermatology at the Case School of Medicine in Cleveland, Ohio. From 2011 to 2012, he served as president of the Medical Mycological Society of the Americas.