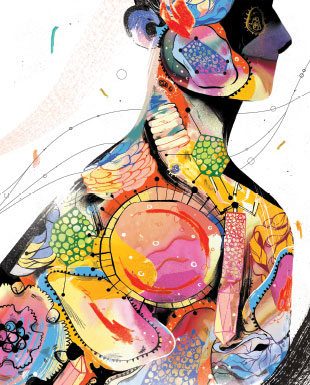 © LYNN SCURFIELDSince the dawn of microbiology, researchers have focused on pathogens that make us and our domesticated animals and plants sick. Because the onset of symptoms was the only way to know if specific viruses were present years ago, the most well-studied viruses are those that cause disease. But many viruses chronically infect humans without inducing disease, except perhaps in the very young, the very old, or the immunosuppressed.

In recent years, great leaps in genomic sciences have allowed researchers to detect viruses living in and on the human body—collectively called the human virome. Recent genomic explorations of human samples have revealed dozens of previously unrecognized viruses resident in our gut, lung, skin, and blood. Some of these newly identified viruses may underlie mysterious, unexplained diseases, but it is also possible that some of these viruses are harmless in most people, most of the time. Knowing how...

A spectrum of viruses

Researchers can now identify viruses present using metagenomic analyses. This is achieved by comparing the genetic information from next-generation sequencing of clinical samples to the genomes of all known viruses. These include viruses that infect all branches of life, from humans to plants and bacteria. When a sample contains a previously identified virus, its genetic sequences can show upward of 80 percent similarity to viral sequences in public databases such as the National Center for Biotechnology Information and the European Nucleotide Archive. Such similarities are easily identified computationally.

Great leaps in genomic sciences have allowed researchers to detect viruses living in and on the human body—collectively called the human virome.

More challenging are novel viruses whose DNA or RNA genome does not show a significant match to that of any known viruses. In these cases, researchers can translate viral genes into proteins in silico and computationally search for related viral protein sequences. Due to the redundancy of the genetic code and the need to maintain basic protein structures and active sites, protein sequences evolve at a slower rate than their genes, and are therefore recognizable over longer evolutionary time.

With this new ability to rapidly characterize viral genomes, data acquisition is outpacing our understanding of the viruses’ role in health and disease. A few years ago, only two polyomaviruses were known to infect humans. Using metagenomics approaches, researchers have identified 13 known human polyomavirus strains, and have linked some of these with diseases ranging from neurological or kidney damage in immunosuppressed transplant and AIDS patients to skin cancers.1 Most of these polyomaviruses infect a majority of people during childhood and are then silently carried until a weakened immune system unleashes them to wreak havoc.
Such occasional pathogenicity is typical of viral families found in humans. For example, some human papillomaviruses are found on the skin of most healthy adults and go unnoticed,2 while a few specific papillomaviruses can induce cervical or anal cancers (now preventable by early vaccination). Similarly, herpesviruses are nearly universal infections in adults, where they set up lifelong, symptom-free residence in neurons or cells of the immune system. Later in life or following immunosuppression, latent herpesviruses can reactivate and induce diseases ranging from cold sores to meningitis, lymphomas, or Kaposi’s sarcoma.

OCCASIONAL PATHOGEN: Human papillomaviruses can induce skin infections and cervical cancer, but many strains are commonly found on the skin of healthy people. Viral diameter approximately 55 nm.© JAMES CAVALLINI/SCIENCE SOURCEA rarely studied group of viruses called anelloviruses may claim the prize as the most common human viral infection; they can be detected in the blood of almost 100 percent of adults.3 Anelloviruses are transmitted very soon after birth and multiple strains can establish persistent viremia in the same person. Because of their level of genetic diversity—the highest of any viral family—anelloviruses may infect different tissues with different consequences. And as with papillomaviruses, it is conceivable that only a subset of anelloviruses may turn pathogenic.

Whether such common and persistent viruses affect health is still being sorted out. A frequent consequence of chronic and acute viral infection is immune overstimulation. The increasing concentration of anelloviruses seen in immune-suppressed individuals indicates that anelloviruses remain under immunological control and may therefore result in low-level chronic inflammation, known to result in myriad health problems. (See “Is It a Pathogen?” here.)

Despite this potential for affecting health, there is as yet no direct evidence that anellovirus infections are harmful. Their ubiquity and lack of acute pathogenicity does point to a long and successful coevolution with humans. Because anelloviruses infect nearly everyone, however, their potential impact on heath is particularly difficult to determine. Fortunately, scientists have recently discovered anelloviruses in monkeys and rodents, providing means to study these viruses’ pathogenicity in these animal models both in isolation and together with other common infections.

Beside the nearly universal blood-borne viruses described above, a cornucopia of other recently discovered viruses can be detected in respiratory and fecal samples of healthy persons, particularly children. These viruses include a growing number of astroviruses, parvoviruses, picornaviruses, picobirnaviruses, and others whose roles in health and disease also remain largely unknown. (See illustration here.)

This flood of new information regarding our virome indicates that, even when in perfect health, we are chronically infected by several types of viruses and often transiently infected by yet others. The perception that every human virus causes disease is therefore yielding to a much more complex biological reality.

Benefiting from our viruses

Viral infections at a young age may help our immune system develop properly, providing protection against later infections and preventing immune overreactions that lead to allergies. Viral infections of the respiratory and gastrointestinal tracts of healthy infants are now known to be common and often asymptomatic, likely thanks to protection by maternal antibodies delivered across the placenta and via breast milk. Such attenuated infections might provide a form of natural vaccination against later infections with related, more-pathogenic viruses. Just as the proper development of the human gut and immune system in infants is dependent on the presence of a bacterial gut microbiome, a recent study found that early enteric viral infection could have a similar beneficial effect in mice.4 Specifically, mouse norovirus, a commensal relative of a common human pathogen, restored intestinal morphology and immunological function that was perturbed in germ-free or antibiotic-treated newborn mice.5

Commensal viruses may also provide protection against pathogenic infections with other viruses. Unexpectedly, a virus in the same family as hepatitis C virus (HCV), Zika, and dengue has been reported to mitigate the consequences of HIV infection. This virus, known as pegivirus C or GBV-C, was originally discovered in an unexplained case of acute hepatitis,6 but researchers subsequently showed it to be a common infection unrelated to the disease. It’s estimated that three-quarters of a billion people are persistently infected with pegivirus C, while even more possess antibodies from earlier, cleared infections.7 Multiple studies have shown that HIV patients infected with pegivirus C tend to live longer than HIV-infected subjects without the coinfection.8 The mechanism behind the phenomenon is unknown, but may involve blocking interactions with cell-surface receptors or intracellular components required for HIV replication.
Another potential benefit of resident viruses is related to their preference for rapidly dividing cells. Anecdotal observations of spontaneous cancer regressions coincidental with viral infections have indicated that viruses may preferentially infect cancer cells, and several promising oncolytic viral therapies are being developed to fight human tumors.9,10 Whether viral infections and lysis of cancer cells is a common natural phenomenon remains an intriguing question.11

Viruses in our DNA

In addition to the viruses that can infect us, humans (and all other vertebrates) have traces of past viral infections integrated into our very own genomes. About 8 percent of the human genome consists of retroviral DNA sequences that have inserted themselves into the human germline, where some of their functions have been adopted to serve essential functions for their host’s survival and development.12 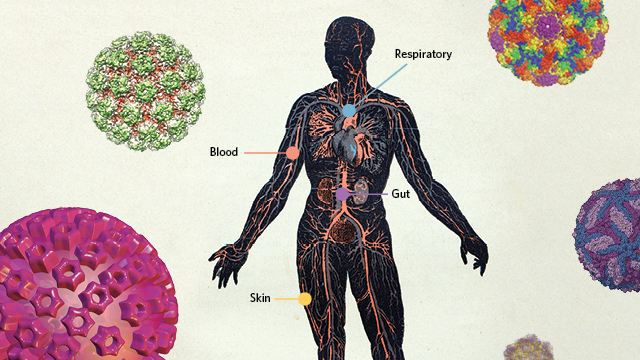 THE HUMAN VIROME: Diverse viruses can be found commingling with human and bacteria cells in and on people’s bodies. Scientists are just beginning to understand how these viruses help and when they can turn pathogenic.
See full infographic: WEB | PDFman: ISTOCK.COM/ILBUSCA. VIRUSES, CLOCKWISE FROM TOP: OPHABINIA REGALIS; CHAPMAN, M.S., ROSSMANN, M.G.; MANUEL ALMAGRO RIVAS; BRUCEBLAUS; VOSSMAN; ALL WIKIMEDIA COMMONS

Expressed proteins from such endogenous retroviruses can bind to and block cellular receptors that might otherwise be used by exogeneous, pathogenic retroviruses.13 The membrane fusion activity of some endogenous retroviruses has also become essential for certain cellular functions of the host. For example, endogeneous retroviral envelope proteins are responsible for fusion of trophoblast cells into the structures of the mammalian placenta that mediate nutrient and gas exchange between maternal and fetal systems.14 Recently, researchers found that one of these viral proteins essential to placental development, called syncytin, also increased fusion of myoblast cells during muscle-fiber formation: male mice, but not females, lacking this retroviral gene for syncytin showed a 20 percent reduction in muscle mass.15 The same virus-descended gene involved in the formation of the placenta is also involved in a sexual dimorphism (greater muscle mass in males) typical of placental animals.

Vertebrates have also coopted a number of integrated retroviral promoters to provide a means for tight, coordinated control of the expression of multiple genes during early embryonic development.16 Clearly, our very long evolutionary history in a bacteria- and virus-rich environment has driven human adaptation to many such infections, from the cellular level—domestication of retroviral genes and hyperreactive immune systems—to the cultural: adaptations intended to reduce the burden of infectious diseases. 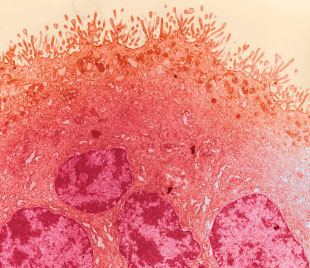 VIRUSES IN THE GENOME: Endogenous retroviral proteins are essential to cell fusion events that occur during the development of the mammalian placenta. A recent study also found that this same protein, called syncytin, increased myoblast cell fusion in male mice, helping them acquire muscle mass. (Shown here is a color-enhanced electron micrograph of a multinucleate syncytiotrophoblast layer of placenta.)© DAVID M. PHILLIAPS/SCIENCE SOURCEThe detection of viral infections will become faster and more sensitive as sequencing and computational platforms continue to improve, and as researchers generate a more complete catalog of human-infecting viral genomes. The ability to analyze a blood drop, respiratory swab, or fecal sample and report its complete viral content within hours or even minutes could enable public-health workers to rapidly understand and better control infectious disease outbreaks, and may one day become standard practice in diagnostic labs or even used directly by consumers. The rapid identification of known viral pathogens could reduce needless antibiotic use and the corresponding spread of antibiotic resistance in bacteria.

Genomic approaches will also allow large molecular epidemiological studies to measure exactly which viruses are associated with what diseases in different geographic regions. This information will determine which viruses are responsible for the greatest disease burden and help determine those vaccines and transmission-reduction steps that will be most effective. Ambitious plans are also afoot to sequence all viruses in all mammal species and to predict which are most likely to spill over into humans. It’s also possible for human viruses to become more pathogenic through mutation or by recombination with animal viruses. A better understanding of what makes some viruses pathogenic, alongside constant monitoring of the human virome in health and in disease, particularly in hot spots of human-animal interaction, may provide early warning signs of the next great viral pandemic.

Eric Delwart is a senior investigator at the Blood Systems Research Institute and an adjunct professor in the Department of Laboratory Medicine at the University of California, San Francisco, where he investigates human and animal viromes.