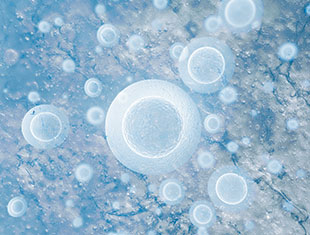 COMPOSITE IMAGE. © JEZPERKLAUZEN/ISTOCKPHOTO.COM; © SBAYRAM/ISTOCKPHOTO.COMOver the past decade, pluripotent stem cells have provided researchers in diverse fields with a new tool to probe developmental biology, define the underlying pathology of diseases, and develop cell-based therapies for genetic disorders. Whatever the source of the stem cells used in a lab—harvested from IVF embryos, garnered from another lab’s cell lines, or reprogrammed from adult cells using chemical factors—they’ll likely all have one destination in common: the freezer.

Whether a lab is managing large collections of individual patient samples or simply saving cell lines to be used for research down the road, freezing cells offers a solution to long-term storage problems and a source for replicating experiments in the future.

But if you’re adding stem cells to your research repertoire, you will need to acquaint yourself with some cryoprotection stumbling blocks. Stem cells, it turns out, generally aren’t as easy...

When scientists first began working with human embryonic stem cells—and putting cell colonies on ice for future use—they found that only around 5 percent of cells in a given sample were alive and pluripotent after a single freeze-thaw cycle. For one thing, stress, including that brought on by cold temperatures, encourages differentiation, says Alexandra Stolzing of the Fraunhofer Institute for Cell Therapy and Immunology in Leipzig, Germany. “If you push them toward a random tissue state, you lose the value of having stem cells in the first place.”

Freezing also seems to activate a programmed cell-death pathway, but adding apoptosis inhibitors to the medium only slightly improves yield in most cases. Researchers are still trying to understand exactly how low temperatures affect pluripotent stem cells and are working to create new protocols and reagents that enable more cells to survive. Slowly, their discoveries are making it easier to pick up the tricks of stem cell cryopreservation.

WHAT SHOULD I FREEZE STEM CELLS IN?
Like all the steps of cryopreservation, the answer to this question will vary based on your cell line. Most successful freezing protocols, though, will include some familiar steps. Cells are often first treated with a protease (or mixture of proteases) to dissociate colonies, centrifuged, and then resuspended in a medium that includes a cryopreservative. A typical preservation medium consists of 90 percent fetal bovine serum (FBS) and 10 percent dimethyl sulfoxide (DMSO), which protects against some of the detrimental effects of freezing. But if cells will eventually be used in humans, both of these reagents have drawbacks—possible toxicity, side effects, and immune reactions in patients. And this standard 90 FBS/10 DMSO mixture has also led to poor viability after thawing. More recently, researchers are turning to reagents that lack animal products altogether and use lower concentrations of DMSO. Caspase inhibitors are also often included to prevent apoptosis.

Earlier this year, Teruo Akuta and colleagues at the RIKEN Center for Developmental Biology in Japan compared a handful of different protocols and reagents to pin down the ideal medium for their embryonic and induced pluripotent stem cell lines and found that treatment with pronase and the chelating agent EDTA before freezing promoted high recovery rates. This step, Akuta says, breaks the cells into small, uniform-size clusters; stem cells tend to thrive in groups, but large clumps of cells don’t get fully penetrated by cryopreservatives. Akuta’s team also aimed to improve the commercially available cryoprotective CP-1, which contains hydroxyethyl starch (a plant-based cryoprotectant) and DMSO, by adding additional reagents—including human serum albumin and ethylene glycol—that they thought might further boost the effectiveness of the media. Adding ethylene glycol produced a yield of 44 percent viable cells—the highest they obtained. But this combination may not be the best solution for everyone.

“There’s no such thing as the best cryoprotectant,” says Zhanfeng Cui, a tissue engineer at the University of Oxford. He recommends trying different reagents, and reading up on what’s worked for other researchers using similar cell lines. Too often, he says, scientists just put their cells in 10 percent DMSO, freeze them, and hope for the best. “You can save a lot of time by spending even a few hours looking through the literature,” he notes. “Growing stem cells is expensive and time-consuming and you want to protect this valuable product.”

DOES SPEED MATTER?
Most cell cryopreservation protocols, including those specifically designed for stem cells, instruct researchers to freeze their samples overnight in a –80 °C freezer and then move the vials into liquid nitrogen the next day for long-term storage. Some studies have found better results when using controlled-freezing methods—where the temperature of a sample is lowered at a steady rate of a few degrees per minute. But if you don’t have access to a controlled-freezing apparatus, don’t despair—other papers have found no difference in the final cell yield between the two approaches.

Yet another freezing option, called vitrification, has recently appeared on the horizon, says Stolzing. Vitrification—the extremely fast cooling of a substance—can help prevent the formation of ice crystals, and results in a syrupy liquid rather than a crystallized solid. But it also requires high concentrations of cryoprotectants and specialized equipment.

“Unfortunately, once again, it takes trial and error to figure out what works for your cells,” Stolzing says. If you only have access to a low-tech –80-degree freezer, then stick with what you have and try tweaking the media to optimize your yield. If you have options to control your freezing rate or to try out vitrification, it’s likely worth testing whether those methods help your cells better survive the deep freeze, she says.

HOW DO I THAW STEM CELLS?
If you’ve cooled your cells to the frigid –196 °C of liquid nitrogen, then they are theoretically stable for many years, since it’s the harsh freezing and thawing processes that activate cell death and differentiation pathways. So the timing of stem cell thaws depends on when you need the cells. Unlike the freezing process, where slow and steady is often preferred, thawing is quick.

“On the thawing side, speed really seems to be essential,” Stolzing says. “Everybody is going for fast thawing now.”

Vials of stem cells can be thawed in a bath of 37 °C water, then resuspended in growth medium. If you’re trying to get rid of DMSO, this might take a few wash cycles. Do save a few days after thawing to plate and grow your cells and to screen them for proper functioning.

WHAT YIELD SHOULD I EXPECT?
If you’re lucky—and working with a line of particularly hearty stem cells—your first try at freezing and thawing may yield 40 percent, 50 percent, or even more of your original cell population. But don’t be surprised (especially on a first try) if your numbers hover in the single digits or teens, says Cui. It can take lots of trial and error to optimize your methods.

And don’t jump the gun and calculate your yield too early, warns Yan Li of Florida State University. “The initial viability numbers can be misleading,” she says. “Sometimes there’s a delayed onset of cell death after thawing, and sometimes you plate cells that are alive and then lose them.” Cell death has been shown to peak about 24 hours after plating, so it’s best to wait longer than that to count what’s still standing. Once you have a baseline yield, you can begin experimenting with new reagents and protocols to see what might boost your numbers.

ARE THE CELLS STILL STEM CELLS?
Finally, there’s the question of differentiation state: Even if you end up with colonies of living cells after thawing, are they still pluripotent?

“With stem cells especially, it’s not simply whether the cells are alive or dead at the end,” says Cui. “The key question is always whether they’ve lost their function.” In addition to analyzing morphology under the microscope and observing patterns of culture growth once the cells are plated, he recommends staining a subset of cells—both before and after a freeze-thaw cycle—for a marker that’s relevant to your stem cells, such as Oct-4. This will give you a good idea of what percentage of your cells have differentiated. Commercially available microarrays can also pinpoint copy number variations, epigenetic changes, or chromosome aberrations that arise after thawing. (See “Pluripotent Until Needed,” The Scientist, April 2013.)

Some researchers argue that there’s nothing wrong with a low yield, Cui says—you just have to grow those cells a bit more after the thaw. But you shouldn’t assume that the cells that survive—especially with very low yields—are a representative sample of the cells you started with. “Maybe the cells that survive are being selected for,” he says. “We really don’t know and that’s something we’re trying to understand.” 