Increasing overall temperatures due to climate change along with severe spikes of heat are tied to drops in bumble bee numbers in North America and Europe faster than they can find new habitats, according to a study published Thursday (February 6) in Science.

To get a sense of how bees have fared over the last century, the authors turned to bee observations over time cataloged by museums across North America and Europe. These included more than 500,000 sightings of 66 bumble bee species in two time periods: 1901–1974 and 2000–2014. A single observation is defined as evidence of a nearby hive, whether one bee is spotted or the entire hive. The statistical analysis showed that in the latter period, sightings in North America were down 46 percent, while Europe saw losses around 17 percent.

To interpret the data, the team developed a model that compared the number of observations against local temperature variations, taking into account variables such as land development. They were able to predict local extinction events of species, the biodiversity of bumble bees, and how likely the bees were to colonize a new area.

“Perhaps the most exciting element is that we developed a method to predict extinction risk that works very well for bumble bees and could in theory be applied universally to other organisms,” coauthor Peter Soroye, a PhD student at the University of Ottawa, explains in a statement. “With a predictive tool like this, we hope to identify areas where conservation actions would be critical to stopping declines.”

The researchers found that declines of bees coincided with an increase in average temperature. The areas that had the most significant temperature gains and suffered spikes of extreme heat had the most considerable losses.

“Bumble bees are the best pollinators we have in wild landscapes and the most effective pollinators for crops like tomato, squash, and berries,” Soroye continues. “Our results show that we face a future with many less bumblebees and much less diversity, both in the outdoors and on our plates.”

The bumble bee’s trademark fuzzy body makes it difficult to thrive in the heat, as it generally acts as a warm sweater. When the bees flap their wings to fly or loosen pollen, their body heat continues to climb. There are limited ways for the bees to thermoregulate away from the hive, which leaves them susceptible to overheating in warmer areas.

“Relative to most other bees, bumblebees are exquisitely adapted to cold climate and live throughout the world in places that are seasonally cold,” entomologist May Berenbaum of the University of Illinois at Urbana-Champaign tells The Washington Post. “They’re effectively sewn into their winter underwear, as it were, so it’s a challenge for them to adjust behaviorally or physiologically to warming temperatures.”

The bees are gradually expanding into cooler areas by going north and finding higher elevations, these migrations aren’t happening quickly enough. The rate of decline is rapidly outpacing the ability for the bees to colonize more hospitable areas, the study concluded.

“We need to figure out ways to help species cope with climate change,” Rebecca Irwin, an ecologist at North Carolina State University who was not involved with the study, explains to NPR, “because if we don’t do something, we’re going to lose species that are really important for ecosystem function.”

Correction (February 11): The original image was not a bumble bee. The Scientist regrets the error. 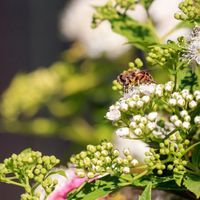 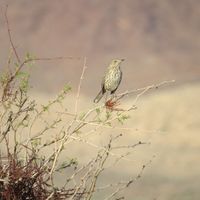