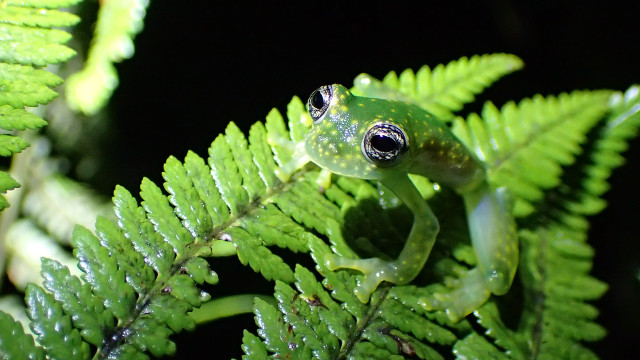 Speckled glass frog in PanamaDOUGLAS WOODHAMSIn Panama, between 2004 and 2007, an outbreak of the amphibian disease chytridiomycosis resulted in countless salamander and frog fatalities. But certain species have since recovered, despite the continued presence of the pathogenic fungus responsible for the die-off. An investigation into both the pathogen and its hosts, reported in Science today (March 29), reveals that while the fungus remains as virulent as ever, the surviving host species are less susceptible.

“I see this as a fundamental discovery, and one that is positive and I am very optimistic about,” says Peter Daszak, president of EcoHealth Alliance in New York, a nonprofit organization dedicated to protecting wildlife and public health from disease. “What the paper says is, there is hope that natural evolutionary processes will lead to some populations bouncing back. It’s very good news.”

The results suggest the hosts may have evolved....

The fungus Batrachochytrium dendrobatidis, which causes chytridiomycosis, infects the skin of amphibians, and so perturbs the animals’ osmotic regulation. The resulting imbalance of body fluids leads to organ failure and death. First identified in Australia and Central America in 1998, the disease has wreaked havoc across the globe, decimating species along the way, in part because of the movement of amphibians by humans. “There are multiple global trades in frogs,” such as the pet and food markets, says Daszak, who was not involved with the research. And where the frogs go, the pathogens hitch a ride.

Indeed, the 2004 Panama outbreak was thought to be due to a human-caused introduction of the fungus to host species “that had never seen this pathogen before,” says chytridiomycosis expert Jamie Voyles of the University of Nevada who led the research. From the numbers of dead and dying frogs, she adds, “it was patently clear that [the disease] had a really big impact on those amphibian communities.”

More recently, when Voyles and her team returned to Panama to monitor the sites of the outbreak, they found that some of the amphibian species were recovering, despite samples from the animals revealing the fungus was still present.

“If the frogs were recovering,” says Voyles, the question was, “How were they doing it? Was it because of a change in the pathogen, the frogs, or both?”

Voyles had her money on the fungus. With pathogens tending to have shorter life spans than their hosts, she reasoned, “you could imagine how a pathogen might evolve to be less deadly in a short amount of time.”

“One standard expectation is that pathogens become less virulent as they course through a new species,” agrees evolutionary biologist Scott Edwards of Harvard University who did not participate in the research. It stands to reason that if a pathogen kills a host instead of keeping it mildly sick, it will have a poorer chance of spreading.

But when Voyles and colleagues compared contemporary samples of B. dendrobatidis collected from Panamanian amphibians with samples collected at the time of the outbreak they were, by all measures, practically unchanged. The team examined the pathogen’s growth rate, ability to produce infectious zoospores, pathogenicity in live animals, and whole genome sequences, finding no significant differences between the historical and current samples.

“I was very surprised,” says Voyles.

She and her colleagues then turned their attention to the amphibians themselves. Skin secretion samples—which contain antimicrobial peptides—collected from the frogs and salamanders before the disease outbreak and since the recovery exhibited differences in their abilities to block the growth of B. dendrobatidis. Although the pathogen-inhibiting ability of the secretions varied considerably from species to species, in all cases those samples taken from before the disease outbreak were less effective than those taken after. It is not yet clear how the secretions have changed.

“We don’t think this is the only thing the frogs have going for them,” Voyles says of the antimicrobial secretions. It’s likely that the more-resistant amphibian communities also have genetic, behavioral, and other adaptations that help them stave off the pathogens, she says.

“The results suggest the hosts may have evolved,” says Edwards, which is “very exciting and offers a glimmer of hope that some species are able to evolve in response to such a devastating pathogen.”

That said, he adds, “The severity of this [outbreak] should not be diminished.” Voyles team estimates that only approximately 20 percent of the local species that were initially affected by the disease have since recovered. As for the rest, says Voyles, “we do not yet know how many have been lost for good, and how many may still recover.”