While scientists have evidence that the composition of the gut microbiome is connected to a variety of autoimmune diseases, understanding how bugs in the intestine might exert influence on the body’s attacks on its own tissues has been tricky. A new study, published today (February 1) in Science Immunology, points to one possible link between autoimmunity and microbiota.

Type 1 diabetes is typically a childhood-onset disease in which the immune system destroys the beta cells of the pancreas, which are responsible for making insulin. Human leukocyte antibody (HLA) genes play a large part in how the immune system distinguishes self from non-self and people with certain variants of this gene have a higher risk of developing of type 1 diabetes. The authors of the latest report showed that, for children carrying these HLA variants, that risk is also linked with how...

“It’s a key finding to be able to link genetics and the immune response to possible disturbances in the microbiome and . . . to show these disturbances for clinical and preclinical disease,” says Kendra Vehik, an epidemiologist at the University of South Florida who did not participate in the study.

“There’s been a lot of Kool-Aid consumed—including by us—about the role of the gut microbiome in fill-in-the-blank . . . autoimmune disease,” says coauthor Jayne Danska of the University of Toronto and the Hospital for Sick Children. “One of the mechanistic challenges to researchers is, how do you connect bacteria that are growing inside the tube of the gut with immune responses against completely distant tissues?”

To investigate a possible connection between the immune system and gut microbes, Danska and her team incubated various bacteria with serum samples from three groups of pediatric patients—healthy controls, kids with Crohn’s disease, an autoimmune disease of the gut, and children with type 1 diabetes. The 14 pools of bacteria represented strains present in a healthy human gut microbiome.

The investigators found that serum from both diabetes and Crohn’s patients contained higher levels of anticommensal antibodies than that of healthy controls. These results indicate that patients with autoimmune diseases have distinct patterns of immune responses to gut microbes. 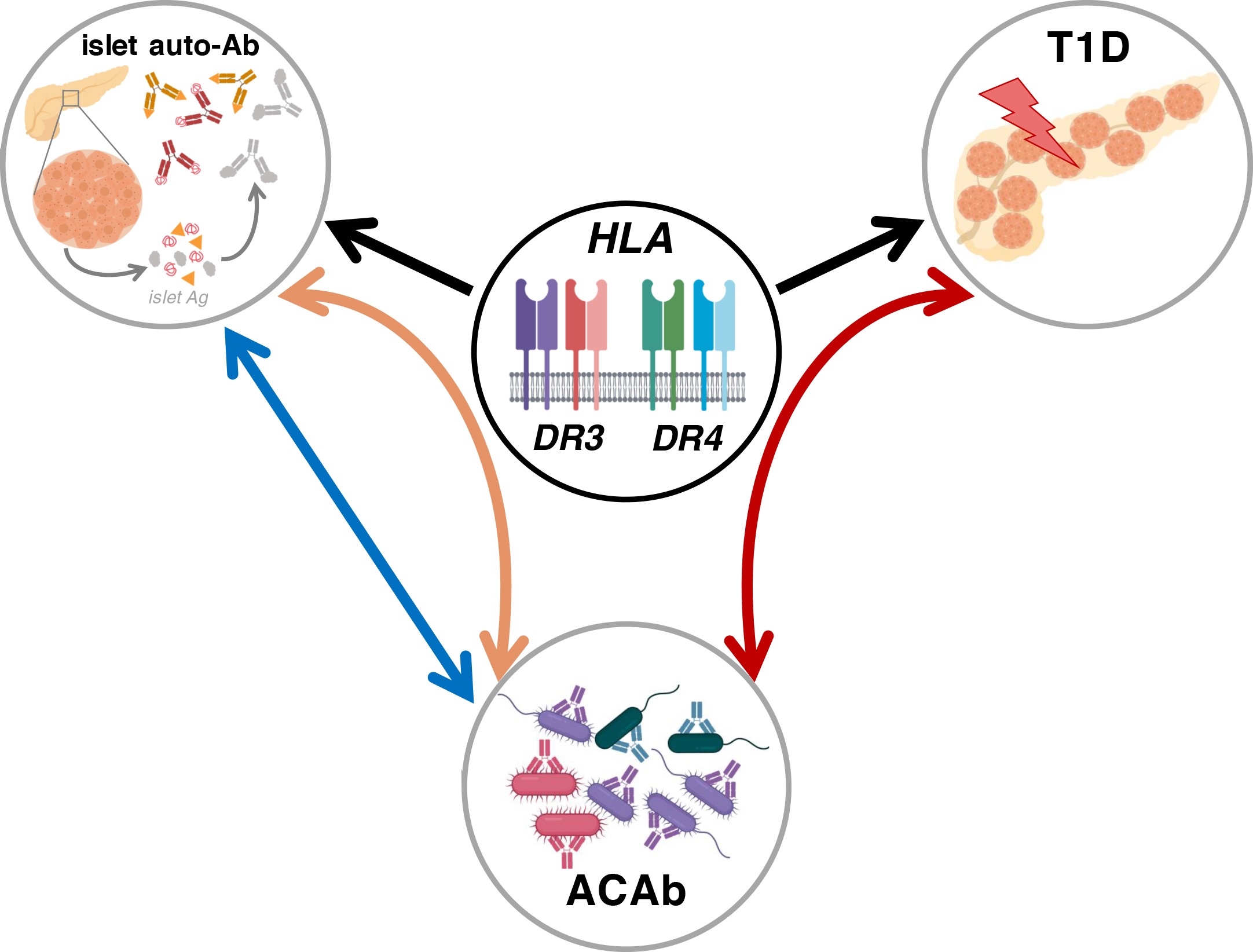 Then the team assessed whether the differential immune responses in children with diabetes would show up before diagnosis. So they repeated the experiment using serum from kids who had levels of islet autoantibodies that suggested they would develop type 1 diabetes. Initially, the authors did not identify differential responses to the pools of gut microbes between these children and controls. But then they sorted subjects by their HLA genotype and found that it was the immune response in addition to the genotype that predicted diagnosis, not genotype alone. Children that were eventually diagnosed with type 1 diabetes and carried both the high-risk HLA-DR3 and HLA-DR4 variants had lower responses to two of the bacterial pools than kids who had both variants, but did not develop the disease.

“Being able to predict the future diagnosis of type 1 diabetes is very powerful and useful,” says Martin Kriegel, who studies immune-mediated diseases at Yale University and did not participate in the study. “The next step will be to go further and see if the reactivity to these bacteria has more than predictive value” and investigate the biology behind the differences the authors have observed.

Coauthor Christopher Yau, a graduate student in Danska’s group, explains that the findings suggest a mechanistic connection between immune recognition of microbes and autoimmunity genetics. “The interesting point about these risk genes is that they also play a central role in the ability of the immune system to recognize both proteins coming from foreign sources—such as bacteria and viruses—and . . . proteins coming from the host body.”

Danska says that in addition to learning more about the underlying mechanism, her group is interested in the potential that this approach has to provide useful biomarkers in studies of immune-mediated disease beyond type 1 diabetes, such as multiple sclerosis and rheumatoid arthritis.

“I’d love to see this extended to those high-genetic-risk kids prior to islet autoimmunity development to see if there’s an anticommensal antibody response pattern that could be a biomarker to delineate those most likely to develop islet autoimmunity,” says Vehik. Until now, “islet autoantibodies have been the assured clinical biomarker for identifying those most likely to go on to develop type one diabetes, so if we can identify another biomarker earlier than autoantibodies, that would truly be a great find and also very helpful in maybe identifying potential for earlier interventions.”

Clarification (February 5): The language in the second paragraph has been revised to reflect the fact that type 1 diabetes is typically, but not always, a childhood-onset disease.