ABOVE: Larval (A) and adult (B) Laemophloeus biguttatus beetles MATT BERTONE

Insect larvae are often thought of as worming their way around their environment, legless and slow-moving—or even immobile. But a paper published in PLOS ONE yesterday (January 19) reports a peculiar behavior in the larvae of Laemophloeus biguttatus, commonly known as the lined flat bark beetle: jumping. This rapid locomotion was previously unknown in this insect species, according to the authors of the paper, and has only been commonly observed in fly maggots. 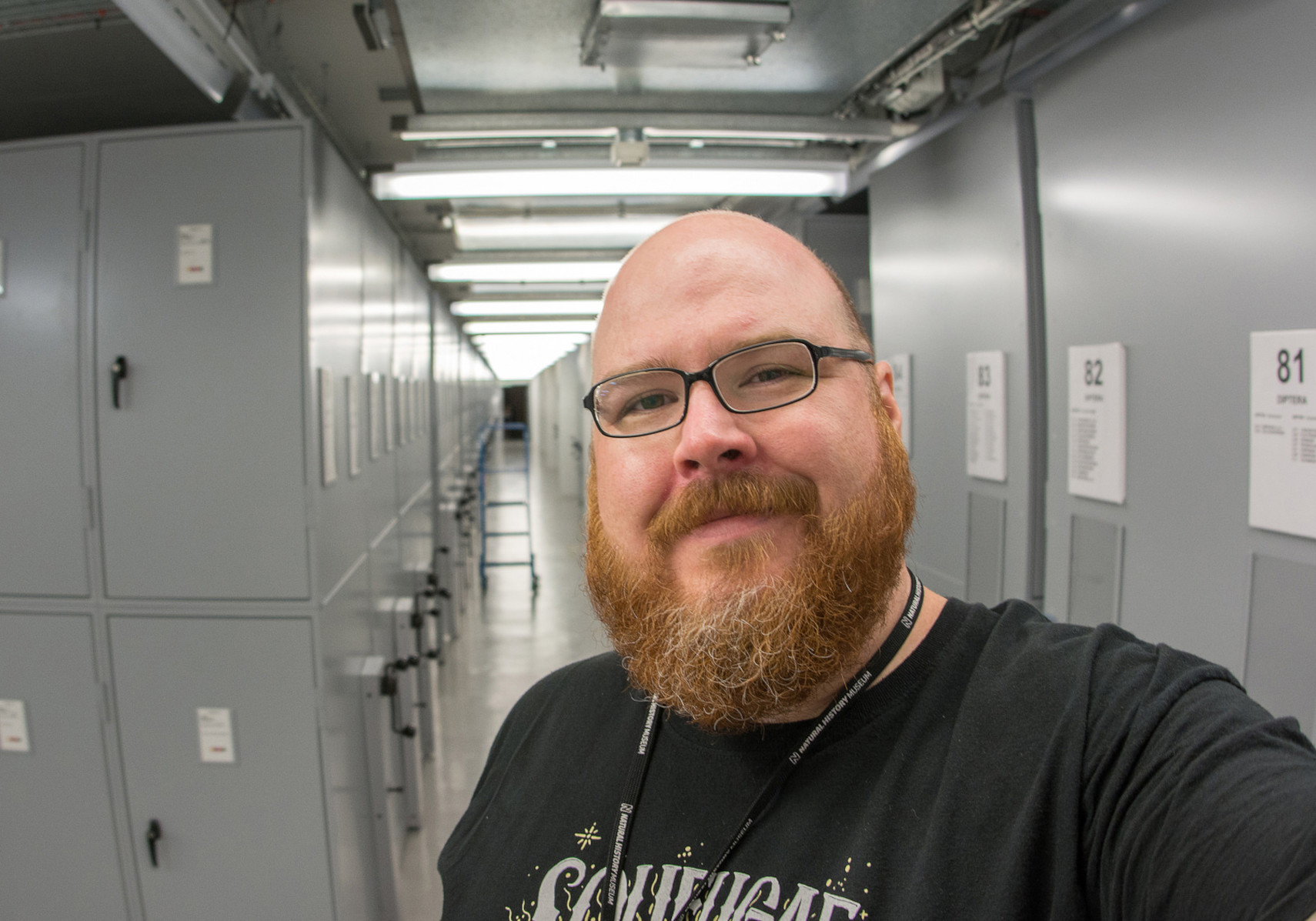 The research team collected and identified beetle larvae from the North Carolina State University campus in 2019. They filmed the jumping larvae with a high-speed camera to capture their movements. They also assessed the muscle mass of the developing beetles using microCT scans and SEM imaging to further investigate the mechanism behind the jittery bugs. The authors report that the Laemophloeus biguttatus beetle larvae can jump further than their body length both horizontally and vertically.

The larvae launch themselves into the air by gripping soil with their legs while arching their bodies, then rapidly curling inward after releasing their grip on the soil. The researchers identify this method as “latch-mediated spring actuation,” a common mechanism insects use to launch themselves into the air. However, in these beetle larvae, the latch is not formed by one body part gripping another body part as in other invertebrates such as springtails and locusts, but rather by the legs holding the soil or substrate beneath the animal.

In a conversation with The Scientist, North Carolina State University entomologist Matt Bertone discusses how he first noticed these jumps, the mechanism behind the behavior, and potential reasons why larvae leap.

The Scientist: How was this paper inspired [or] started?

Matt Bertone: This was really serendipitous. Basically, there was a standing dead pine tree outside of our lab on campus that had some nice fungus that was growing on it under the bark. That’s a great place to look for insects. . . . Basically, I went to look at the tree and collected all different types of insects from there, from beetles to bugs and mites, and things like that. I brought them back to the lab and as I was preparing and putting these larvae on pieces of bark to take photos, I noticed they would walk a little bit and then hop. I was like, ‘That’s really strange.’ I’ve never heard of that before and searched a little bit and couldn’t find anything about that.

I was in a seminar with Dr. Adrian Smith, who’s at the NC Museum of Natural Sciences, and he does a lot of really great high-speed filming and videography. We’ve been talking about projects to work on, and I was like, ‘Oh, hey, I just found this little larva that looks like it’s jumping. Let’s record it.’ Once we got the high-speed recordings . . . I sent it to a few colleagues who are experts on beetles, and none of them had ever heard of that happening or seen that happen.

TS: What is special about this jumping behavior in beetle larvae?

MB: Jumping beetle larvae . . . [are] actually fairly uncommon for such a large group of insects. There’s over 350,000 species of described beetles in the world, and very few of them jump as larvae. . . . When we saw the slow-motion video, we were able to see how it was actually jumping and that was even less common—basically unique among insects.

TS: Can you summarize steps in your research process?

MB: We first filmed [the larvae] at 3,000 frames per second or so . . . and we could see what was happening and how they were jumping, but we didn’t see some minute aspects of it. [Smith] actually filmed at 60,000 frames per second and we were able to see much more distinct steps in the process. Once we did that, we also looked at the larvae under a scanning electron microscope to see if there were any special features or anatomy that might help them jump. . . . We also reviewed the literature . . . to put them in context of the other types of insects that have jumping larvae. In that context, these [larvae] are very unique.

TS: Can you explain how these larvae leap?

MB: They were doing this latch-mediated spring actuation. Basically, they latch on to something, build up energy in their body, and then release the latch. That releases all the energy. What was unique about this is that they were using their claws to grip this substrate, the ground, and that was where they were latching. There are other insects that have latching mechanisms and do this [where] they actually have a body-part-to-body-part kind of latch, rather than a body part to the substrate. However, [these larvae] don’t need to develop two body parts to latch on to each other.

We invited Joshua Gibson at University of Illinois, a specialist in these latching mechanisms and in energy . . . he did a CT scan of the larvae to look at the musculature inside. Basically, if we know how much power a muscle puts out, and we know how much muscle [the larvae] have, we can see how much power it would take to have them leap the way they did, and their strength and speed. Even though [the jump is] not super powerful or super record breaking, it was more than the muscles alone could power. That led us also to show that this is some kind of latch where there’s the stored energy that’s released. 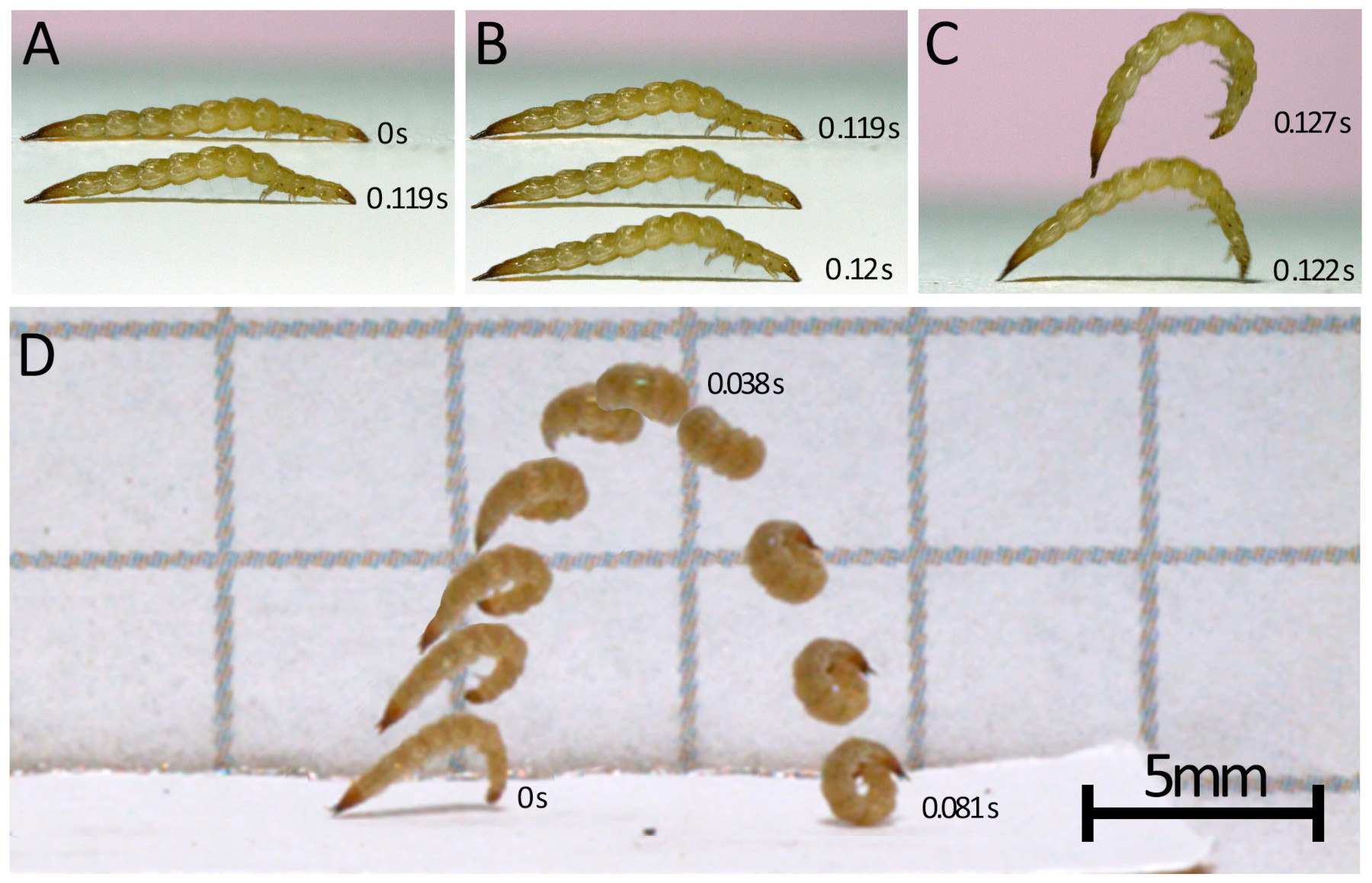 TS: Do you have any ideas or speculations [as to] why the beetle larvae do this?

MB: First of all, we ruled out that they were doing this normally, because they often live under bark. There’s really no space to jump around. Another idea was that it was some kind of artefact of what they do under the bark that might be translated to [a] jumping mechanism outside, but they did it so readily. . . . When they felt the need, they would just hop. They also really didn’t react specifically if you touch them with something. They will get a little annoyed, and they’d walk away, and they’d hop.

Our best hypothesis based on all this information is that because they live on this decaying wood and under bark, these resources are . . . basically not around for a long time. They decompose. They fall apart. So, we can imagine a situation where the bark falls off a tree and exposes these larvae, and they’re light-colored against a dark background. They’re easy for predators to spot. This leaping actually costs less energy than to crawl. It may be that they just use this to get out of a bad situation quickly, and randomly find a better situation because they can’t actually direct their jumps. They kind of go all over the place. It’s not super sophisticated, but it is an energy effective way to move around.

TS: Were there any challenges throughout the process?

MB: Although this species is common across mostly [the] eastern US, and probably one of the most common of the species of this group of beetles, they are fairly tiny. They’re in these very ephemeral resources, these fungi that grow on dead trees and things like that for a small period of time, and then get turned over to other fungi and other organisms. Finding enough larvae to be able to experiment on was one of the challenges. We were really fortunate to have found . . . a couple dozen specimens. But they don’t live very long. . . . If we had more specimens that were healthy and behaving naturally, then we could kind of manipulate [experiments] in ways to see what caused them to jump. But because we only had a limited number, we were only able to really describe the jumping and present this as a new finding.

MB: It’d be great if other researchers who find [the larvae] were to push the studies further and look at other reasons why they might jump or if there are other species that may jump as well.

TS: What do you want readers to take away from these observations?

MB: Adrian published a video about jumping fly larvae maggots, and we actually found a number of them under the same bark that were jumping as well. . . . There are lots of different flies that do this. They have a very well-known mechanism for doing it. At the end of this video that Adrian produced, he did a little teaser for this jumping beetle larvae. . . . A researcher, an expert in this group of beetles from Japan, saw the video and said, ‘Oh, I’ve seen larvae do that, too.’ It was a different genus, in the same family. . . . We do know [that] the jumps in real time look almost identical, or very similar, although [these two beetle species] are not super closely related.

This all leads to us thinking that [larvae jumping may be] more widespread within either this group of beetles or even close relatives.

I definitely encourage people to look under the bark—responsibly—on dead trees and dead logs and look at living things and see how they do what they do.