Mosquitoes avoid pesticides that they’ve had close encounters with, a fact that may complicate pest management.

ABOVE: Indoor residual spraying and other chemical mosquito control methods rely on chemicals that the animals can learn to sniff out and avoid. © FLICKR.COM, BRANT STEWART, RTI

Mosquitoes learn to avoid the smell of toxic pesticides, even if it means starvation, finds a February 17 study in Scientific Reports. This could make pesticides less effective, the authors suggest, complicating efforts to control populations of the insects in areas with heavy burdens of mosquito-borne diseases.

“This new paper shows that mosquitoes are very good at remembering odors associated with bad things,” Christopher Potter, a neuroscientist at Johns Hopkins University School of Medicine who was not involved in the study, tells The Scientist in an email. “The fascinating aspect of this work is that it reinforces to us that mosquitoes are far more complex than simple flying hypodermic needles.”

After decades of relying on a limited number of pesticides, mosquitoes have begun to evolve resistance to the most commonly used classes of toxins, including mutations that evade pesticide binding or increase detoxification, threatening the success of mosquito control programs. In addition to such evolved resistance, some researchers have suggested the animals may simply learn to avoid contact with pesticides, what’s called behavioral resistance.

Back in 2012, Frédéric Tripet, coauthor of the present study and an entomologist at the Centre for Applied Entomology and Parasitology at Keele University in the UK, demonstrated that mosquitoes are capable of associating visual and olfactory cues with a reinforcing stimulus. So, for the new paper, he and his colleagues sought to investigate the opposite—their ability to associate cues with a negative stimulus—and specifically understand “the potential importance of learning in relation to pesticides,” Tripet tells The Scientist.

The researchers first exposed two species of human disease–carrying mosquitoes, Aedes aegypti and Culex quinquefasciatus, to nonlethal doses of five common pesticides. The team exposed about 200 female mosquitoes of each species to each pesticide and saw that the mosquitoes were “knocked-down and almost killed,” Tripet explains. The mosquitoes were then allowed to recover and used in two experiments designed to test learning.

First, the researchers used a standardized WHO tunnel assay, placing the mosquitoes in a cage with a white rat, a desirable food source for the animals. However, a pesticide-laced bed net separated the mosquitoes from their food. The net contained holes that were large enough to allow the mosquitoes to fly through, so it wasn’t meant as a physical barrier, says Tripet. Rather, “this is a way of assessing whether [the mosquitoes] were fearing the pesticide or not,” he explains. 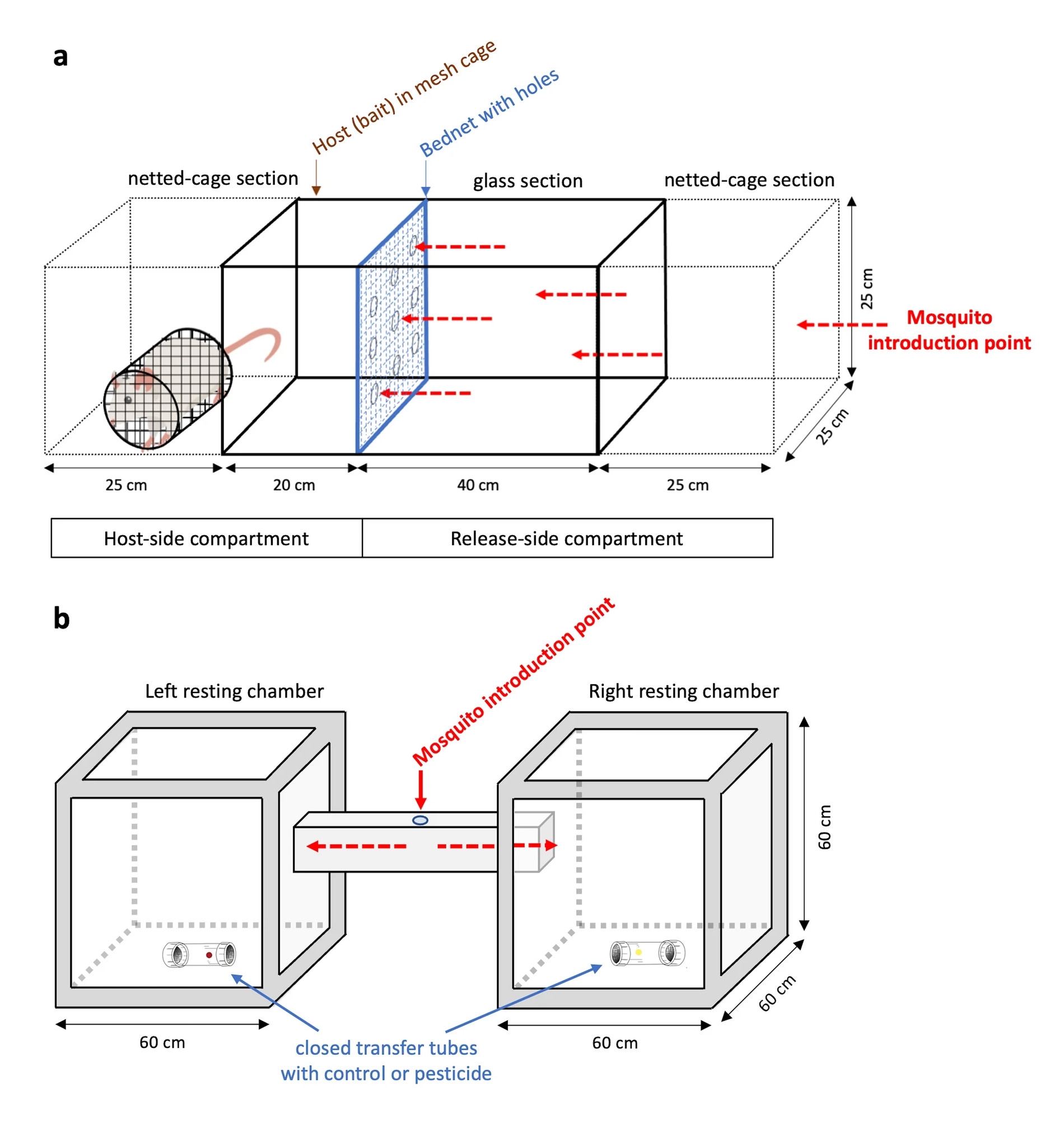 In the second experiment, mosquitoes were offered a choice between two resting chambers: one chamber smelled of the pesticide they had been exposed to, while the other smelled of a control substance. The substances were placed in mesh-capped tubing so that the mosquitoes couldn’t come in direct contact with the chemicals, only their odors. While unexposed mosquitoes had no preference for either chamber, pre-exposed mosquitoes strongly preferred the control chamber. “Eighty percent went away from the smell,” Tripet describes. “They couldn’t rest peacefully near [it], and just stayed away.”

The study “suggests that mosquitoes could use their sense of smell to protect them from insecticides,” writes Potter, who wonders how long the memory effect lasts. “In the experiments, mosquitoes were tested ~24 hours after their near-lethal encounter with the pesticide. But does it extend much farther in time than that? And could the odor memory be made semi-permanent with 2 or 3 such near death experiences?”

Kirk Hillier, an insect chemical ecologist at Acadia University who was not involved in the study, tells The Scientist that the “straightforward experiments” raise additional questions, especially with regard to the mechanisms underlying the observed avoidance of pesticides. He wonders: “What does pre-exposure do?  . . . What are the actors involved in terms of modulating this effect and causing the plasticity that is observed?” Neuroscientists would have to probe mosquito brains as deeply as they have Drosophila brains to answer such mechanistic questions.

Tripet notes that the findings may have consequences for efforts to control mosquito populations. Previously, researchers thought that the only real way a pesticide could become less effective over time was if the mosquito populations evolved resistance to the chemicals. He says the new study demonstrates that “changes [in pesticide efficacy] actually don’t have to be necessarily inherited and due to selection. It can be simply because of [the insects’] behavioral plasticity and the fact that they have the ability of learning.”

On the upside, Hillier points out that knowledge of mosquito olfactory learning “may help with developing different strategies for [employing] these compounds.”