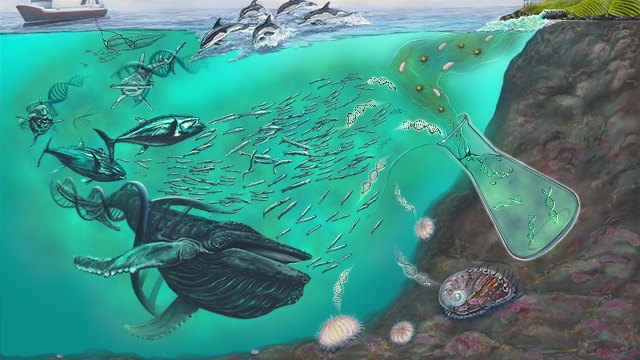 KELLY LANCEAlien carp are invading rivers in the United States, wreaking havoc as they out-breed and out-feed native species. These voracious plankton-eaters devour as much as 20 percent of their bodyweight a day, and top the scales at 40 kg. The fish may already represent as much as 97 percent of the total biomass in the Illinois and Mississippi rivers, and it may be only a matter of time before they reach the Great Lakes.

“The worry is that they’ll not only destroy the food web, but they’ll also outcompete all the other native species,” says Andy Mahon, a molecular ecologist at Central Michigan University who has studied Asian carp for more than six years.

The Great Lakes hold 21 percent of the world’s surface fresh water and are home to highly productive fisheries and popular recreational areas. If Asian carp take hold in this economically important...

Carp belong to the Cyprinidae family, which includes silver carp (Hypophthalmichthys molitrix), bighead carp (H. nobilis), grass carp (Ctenopharyngodon idella), and even the humble goldfish (Carassius auratus). Bighead and silver carp, originally from East Asia, were introduced to the United States in the 1970s and have already spread through more than 20 states.

New molecular methods are proving essential to track these invaders, and perhaps slow their invasion. Traditional survey techniques such as visual detection, netting, and electrofishing are time consuming, disruptive, and struggle to detect species when they are rare. Yet this is exactly the situation at the leading edge of an invasion, where conservation efforts can be most effective.

An Asian carps leaps out of the Wabash River.FLICKR, US ARMY CORPS OF ENGINEERS, PHOTO BY TODD DAVIS

As organisms move through their environment they leave behind billions of discarded cells in the form of hair, skin, and feces, each carrying a treasure trove of information in their DNA. This environmental DNA (eDNA) can linger in the water for up to 48 hours, offering a snapshot of which organisms have passed through a location recently.

Surveying for eDNA has allowed Mahon and his colleagues to detect the early signs of bighead and silver carp in Lake Michigan. In a study several years ago led by Christopher Jerde, then at the University of Notre Dame and now at the University of California, the team extracted eDNA from more than 2,800 two-liter water samples collected across the Great Lakes Basin, and amplified mitochondrial DNA with markers specific to bighead and silver carp. They detected Asian carp DNA in the Chicago Area Water Way System—the only continuous connection between Lake Michigan and the Mississippi River basin—beyond the electric barriers designed to keep them out.

“These tools are so extremely sensitive,” explains Mahon, and “we’ve shown that they work better than nets, electrofishing, and fishing with hook and line.” In experiments using semi-natural streams, Mahon and colleagues showed last year that eDNA is highly location-specific; DNA from bluegill carp and largemouth bass was undetectable just 50 meters downstream of where they introduced it.

In conjunction with traditional surveys, the US Fish and Wildlife Service now runs an annual monitoring scheme for Asian carp in the Great Lakes and their tributaries, where eDNA suggests that the advance of bighead and silver carp has reached a standstill. No eDNA from either species has been detected outside the Chicago Area Waterway System in any Great Lakes tributary since 2014. However, in 2015 three Asian carp larvae, which can slip past electric barriers, were found in net surveys about 10 miles from barriers protecting Lake Michigan, but not beyond them.

Mahon says it’s not too late to keep stray fish from establishing permanent populations in the Great Lakes. “We have to cut off the head of the snake—we have to separate the two basins, he says. 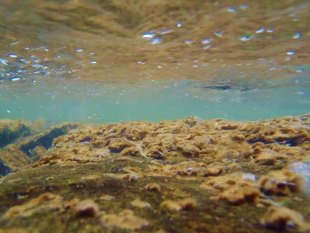 Its small size makes it difficult to detect visually, so Stephen Keller, a plant population geneticist at the University of Vermont and his colleagues turned to eDNA to track Didymo’s distribution in Maryland and Pennsylvania. Publishing in Diversity and Distributions earlier this year, the team used quantitative PCR to amplify environmental DNA using highly sensitive Didymo-specific markers.

“The eDNA approach was a cost- and time-saving solution to being able to monitor a large number of sites for this species,” Keller says, and to detect populations at low abundance, before they produce nuisance blooms. His group identified Didymo DNA at seven sites, including one where blooms had not yet been reported.

Sequencing eDNA revealed similarity between US populations of Didymo and published sequences from elsewhere in the world, Keller’s team found, indicating that recent blooms are being caused by invading non-native strains. “Knowing whether the species is there or not is fundamental to understanding how to go about regulating potential human vectors of dispersal for this species,” explains Keller. Some states, such as Maryland, have taken simple measures that could slow the spread of Didymo to new sites, such as restricting fishermen’s use of felt-soled waders. “The felt on the bottom is the perfect medium to pick up Didymo and other invasive algae and transport them between river sites,” Keller adds.

Environmental DNA is also shedding light on some of the most elusive animals on Earth. Take Europe’s only cave-dwelling salamander (Proteus anguinus), for example. This unusual creature lives in underground caverns filled with water, many of which are totally inaccessible to divers.

Judit Vörös, chief curator of fish, amphibians, and reptiles at the Hungarian Natural History Museum, and her colleagues used eDNA to confirm the presence of Proteus in 10 locations this year, and detected it for the first time in another five.

Proteus “is a very well-known and famous animal in Croatia, but the level of knowledge we have about them is very basic,” says coauthor Dušan Jelic, a molecular ecologist at the Croatian Institute for Biodiversity in Zagreb. Although the creatures are more widespread than expected, the data show they are “disappearing in around one third of localities known from previous studies,” explains Jelic.

New eDNA techniques have also helped track the critically endangered Yangtze finless porpoise through the murky waters of China’s Yangtze River. These enigmatic creatures are declining due to dams, pollution, boat traffic, and overfishing, and are thought to number just 1,040 in the wild. “eDNA represents a revolution over traditional monitoring methods,” Kathryn Stewart, a postdoc at the University of Amsterdam who led the study, wrote in an email to The Scientist. It is “perfectly suited for studying this cryptic, elusive, and rare species.”

Stewart and her colleagues at Tongji University and the Chinese Academy of Sciences used eDNA surveys to detect the porpoise in the Tian e-Zhou National Nature Reserve. In February, they reported evidence that the porpoises prefer different sites in the reserve at different times of year, which may help inform conservation efforts. “We hope to get a better understanding of what factors are limiting these populations,” Stewart wrote.

As the cost of whole-genome sequencing plummets, instead of developing DNA markers specific to target species, it is now possible to sequence all environmental DNA present in a sample. Comparing these data with growing public databases of genome sequences can identify entire ecological communities at once.

“New techniques using next generation sequencing allow you to collect an extremely large number of DNA strands and sequence them all at once in a big batch,” says Larry Crowder, a marine conservation ecologist at the Center for Ocean Solutions in California. In 2014, Crowder and his colleagues were the first to demonstrate eDNA's potential to monitor entire marine vertebrate communities. They sequenced eDNA in water collected from the Monterey Bay Aquarium’s Open Sea Exhibit. “It’s a known ocean,” laughs Crowder, “the aquarists know exactly which fish, sharks, and turtle species are in there, and at what relative abundances.”

The technique detected all bony fish species in the tank by searching for common vertebrate sequences in the mitochondrial 12S rRNA gene. “We got all of them, and we even got their relative abundance in the tank,” says Crowder, adding that, “it kind of knocked us out.” With a little fine-tuning, they were able to detect DNA from turtles, sharks, and even the human divers who clean and maintain the tank.

But would the new technique work in the field? To find out, scuba divers conducting fish surveys in Monterey Bay collected water samples in five habitats moving “from sand to sea grass, through two levels of kelp forest, to the rocky reef beyond the kelp,” says Crowder. They found that even in the swirling waters of the bay, eDNA outperformed visual surveys. “We got DNA from about twice as many species as they saw, and [species] were where you’d expect them to be from the natural history,” he says. “The outcome was stunning to me.”

In April, researchers at the Hopkins Marine Station of Stanford University, using a similar technique, detected 92 marine vertebrate taxa, representing 33 families, in Monterey Bay. These data revealed differences in the species composition between the relatively shallow waters of the continental shelf, and the depths of the Monterey Bay sub-marine canyon.

The next step will be to develop large-scale environmental DNA monitoring schemes that can track entire ecological communities through space and time in a way that was previously unimaginable. Crowder’s group is involved in an on going project funded by the National Oceanic and Atmospheric Administration, testing the feasibility of incorporating eDNA into regular oceanic monitoring schemes run by the Marine Biodiversity Observation Network (MBON). “If it proves out, then eDNA would become a regular fixture in ocean monitoring,” says Crowder.

We have only just begun to scratch the surface of what eDNA can reveal. Scientists may one day be able monitor communities automatically, determine species abundance, population structure, and even reconstruct evolutionary history. “eDNA has already seen a trans-disciplinary jump from microbiology and forensics, to conservation biology,” wrote Stewart. “I foresee this technique being utilized in more disparate fields, such as toxicology, epidemiology, and even evolutionary ecology.”

Correction (June 1): We reported that Asian carp larvae were found upstream of electric barriers, but it was downstream and behind the barriers that protect Lake Michigan. The Scientist regrets the error.