ABOVE: Crocidura pallida, one of the 14 new shrew species discovered KEVIN ROWE

Shrews belong to a famously diverse mammalian family, Soricidae. One genus, Crocidura, contains more than 180 species. A team of scientists from the US, Indonesia, and Australia have now added to this insectivore’s ranks, publishing a paper last month in the Bulletin of the American Museum of Natural History that details 14 new Crocidura species on Sulawesi, an island in Indonesia. According to a Louisiana State University news release, this is the “largest number of new mammals described in a scientific paper since 1931.”

The team conducted a decade-long survey that examined a total of 1,368 shrews. Based on the animals’ physical characteristics and genomes, the team concluded there are 21 species of shrew endemic to Sulawesi, 14 of which were previously unidentified. The authors write in their paper that the diversity of shrew species on Sulawesi is almost three times what has been observed on any other island in the world. 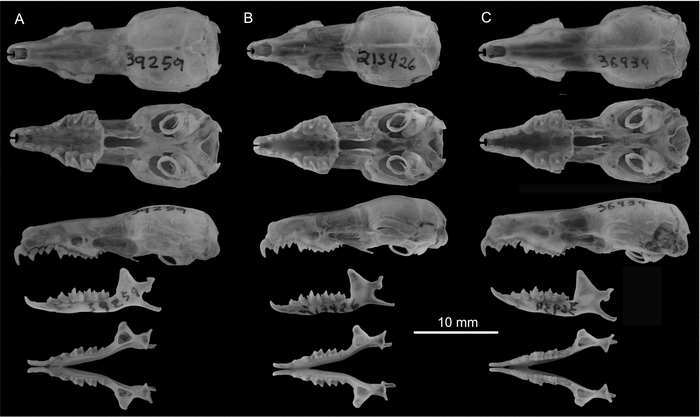 According to the Associated Press, Louisiana State University biologist and research lead Jake Esselstyn was initially interested in “questions about how shrews interacted with their environment, with each other, how local communities were formed.” As detailed in the paper, he and his colleagues trapped hundreds of shrews at varying altitudes on Sulawesi’s mountains and compared their mitochondrial DNA sequences and other genetic elements with those from specimens collected in the early 1900s, finding evidence of previously unknown species.

Esselstyn tells New Scientist that the unique K-like shape of the island as well as its mountainous terrain may have led to isolation of populations and thus contributed to the high species diversity the team found in shrews, though this idea remains untested.

Nathan S. Upham, an evolutionary biologist at Arizona State University who was not involved with the study, tells the AP that the paper, which is more than one hundred pages long, is “super valuable for all current and future students of mammal biodiversity.”

According to the AP, Esselstyn says that a next step would be to sequence genomes to answer questions about how these species of shrew evolved. Furthermore, he tells New Scientist there’s a possibility that still more shrew species live at altitudes higher than those where his team collected. Coauthor Heru Handika adds, “We hope that our findings can encourage more work and funding to study biodiversity on mountains.”