Fish can navigate out of water, a study published on December 9 in the journal Behavioral Brain Research finds, suggesting that animal navigational abilities aren’t dependent on ecological context.

Previous studies have trained rats and dogs to operate vehicles, and in 2014, engineers at Ben-Gurion University of the Negev in Israel developed a “fish on wheels” interface that allows fish to control a robotic car over land—essentially, a clear tank on a four-wheel platform that moves according to the orientation and movements of the fish inside. Last month, the scientists implemented this technology to test whether goldfish (Carassius auratus) can perceive and understand a waterless environment and transfer their spatial representation and navigation skills to the terrestrial realm.

I am excited to share a new study led by Shachar Givon & @MatanSamina w/ Ohad Ben Shahar: Goldfish can learn to navigate a small robotic vehicle on land. We trained goldfish to drive a wheeled platform that reacts to the fish’s movement (https://t.co/ZR59Hu9sib). pic.twitter.com/J5BkuGlZ34

Cognitive neuroscientist Ronen Segev and his colleagues taught six goldfish to use the system and then placed them and their cars one at a time in an enclosure. Whenever a fish reached a target pink board mounted on one of the enclosure’s walls, it would receive a single pellet of food as a reward. For each session, the team recorded the number of times the fish reached the target, how long it took for the fish to reach the target, and the distance travelled.

Segev and his team observed that the fish were able to reach the target even with varying starting positions and decoy targets added to throw them off. When the target location changed to a different wall, the fish first went to the original location of the target, and then corrected their navigation to approach the correct wall. The results point to the fish’s capacity for learning, in addition to piloting a vehicle.

The Scientist spoke with Segev about his research process and what insight these studies could provide into fish cognition and visual navigation.

The Scientist: What did you want to answer with this study?

Ronen Segev: I’ve worked for many years on cognitive capabilities of fish and specifically on navigation [and] how they find a way in the world. And I was a little bit frustrated by the fact that in the lab, I have a 1.4 by 1.4-meter-tall water tank. It’s a small enclosure . . . and in the wild, fish can navigate in the ocean. They can navigate in a lake. I was looking for a way to actually match what I can do in the lab [to] real life for fish.

Then, we came across several experiments that really fascinated us. One of them is a rat that drives a car. . . . I saw this and then I said, ‘Oh, okay, so we can actually try to make it into science and try to endow the fish with the capability to navigate on land.’ Then you can actually do experiments which are not restricted to the size of water tank that you can maintain in the lab.

There are two sorts of difficulties [that the fish face]. It’s very hard to learn . . . to drive a car because everything is moving, and you need to control and move your body in a certain way so the vehicle will go in a certain, desired direction. So, there is the cognitive effort of driving the vehicle itself. Then after [they] overcome this, [they] need to overcome the cognitive effort of navigating in a completely foreign environment. It’s foreign in the sense that it’s not water anymore. It’s foreign in the sense that looking from the water tank, things looks very differently due to the air-water-plastic interface . . . there is refraction which distorts the fish’s vision. All this the fish need to overcome in order to be able to navigate on land. Our work is the first step [where] we show that the fish can do that.

TS: Why did you choose to work with goldfish?

RS: They are available and hardy. These are really amazing animals. You can get them any size you want . . . so you can optimize the size of the animal for your experiment. You can get them [from] a local pet supplier, which is a great relief, and they’re strong. So, even if the conditions are not perfect, they will survive. All these things really make the goldfish an excellent animal to work with. 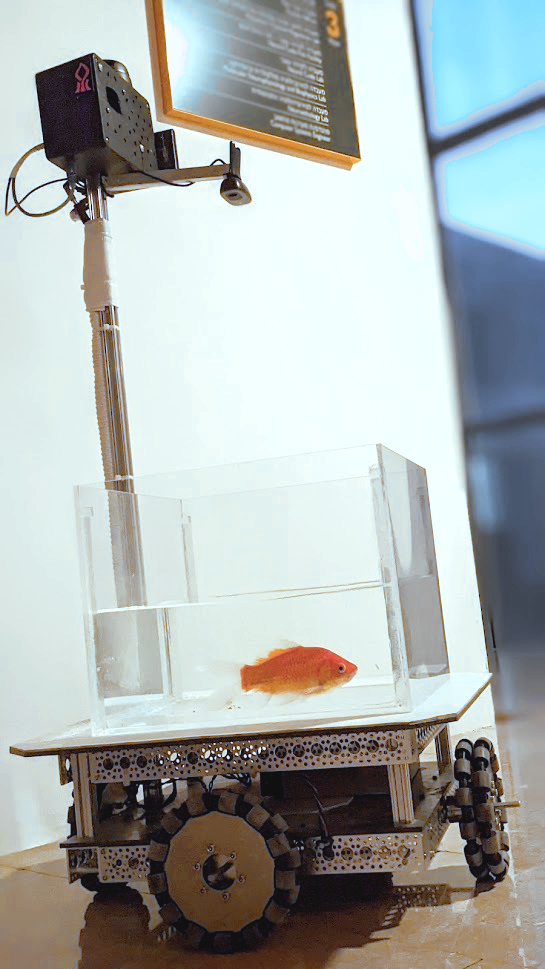 TS: Can you describe how the fish operated vehicle works?

RS: We have the water tank . . . the computer that sits above, and a web camera that captures the water tank [that] automatically detects the fish’s position and orientation and sends a command to the vehicle and [its] motors and wheels to go in this direction. Now, the trick is to endow the vehicle with the capability of going in all directions . . . by having special wheels that actually allow it to go in all four directions in a completely symmetrical way.

TS: Walk me through how you trained and tested the navigational abilities of the fish in different experiments.

RS: We did a set of experiments where the vehicle started more or less at the center of the room, and there was a big plastic sign on the wall and the fish needed to go directly to the sign on the wall. In order to convince [ourselves] that the fish really controls the vehicle, what we needed to do is manipulations where we start not at the center of the room but in many different locations, put in decoys of targets, or actually take the target and move it to the other side [of the room].

TS: Did you encounter any challenges throughout the process?

RS: There were many small tweaks [or] small parameters that needed to be adjusted. The computer needs to react to this [fish] approaching the [tank] wall in the right direction before the vehicle starts to move. . . . You need to put [the vehicle’s controls] in some sweet point where . . . [the vehicle’s behavior is] intuitive from the point of view of fish. . . .  What was the fish’s action? What was the fish operated vehicle’s reaction? You need to adjust all this in order to make it work.

TS: What surprised or fascinated you during this research?

RS: There was this moment that we said, ‘Okay, so the target is here. Let’s move it to the other side of the room.’ The initial trajectory was the fish started the center, and it went on to the original position of the target. It was looking there, and then it found out that [the target was] actually on the other side. On the third trial, it went directly to the other side. You really see the learning in action.

RS: I think that the next step is actually to make it more difficult. Now we are in a position where we can actually let the fish drive the vehicle, in maybe open space . . . Can the fish find its way towards a target that it cannot see? I think these are the types of questions that fascinates me, and they are well connected to questions of spatial learning and spatial memory. I think there are actually many other questions that can be dealt with using this system, and I really hope that [more researchers try it out], and probably they can take it in directions that I cannot imagine, which are going to be cool.

TS: What do you want readers to take away from this study?

RS: I get many times this reaction of: ‘We didn’t know that fish are so smart.’ And I think that part of it [is] because people think fish are sort of primitive [or] not developed enough. This is not correct. . . . They have their own evolution . . . in a completely different world. It’s a three-dimensional world. It’s full of water. It’s a very dangerous world. So, they solve cognitive problems, or they handle the challenges of the environment very different from us. I think that we need to appreciate this. There is a lot of wisdom in the way that they do it, even if maybe we don’t see it initially. I think that fish are very smart and do smart things. We need to appreciate the complexity of their world and the difference of their world from ours.