ABOVE: An image of Astragalus nitidiflorus submitted to the citizen science platform iNaturalist that has yet to be verified by taxonomists. The species was officially recorded as extinct but was recently rediscovered.
© NANOSANCHEZ, INATURALIST

Around four decades ago, the late botanist Walter Scott tramped up a hillside that was destined to be quarried and plucked a few yellow flowers from the rocky slope. He took the plants home and, in an effort to save them from extinction, raised them in well-drained wooden trays. Scott’s foresight to preserve Hieracium hethlandiae (F. Hanb.) Pugsley, a hawkweed whose stellar flowers might be mistaken for dandelions by the untrained eye, went apparently unnoticed by the broader botany community.

As the hillside habitat gave way to a road, H. hethlandiae was declared extinct by the UK’s National Biodiversity Network and in some scientific reports. But the plant is very much not extinct. Although Scott’s attempts to get them growing in the wild again failed, the nonprofit Shetland Amenity Trust’s horticultural unit, to which he had gifted some plants, finally succeeded in 2015, according to Paul Harvey, the organization’s natural heritage project officer. The plants have since flourished into a second generation at their new home—a quarry with a geology similar to their native site. Despite still being considered extinct in official records, “so far they seem to be doing OK here,” Harvey writes in an email to The Scientist. 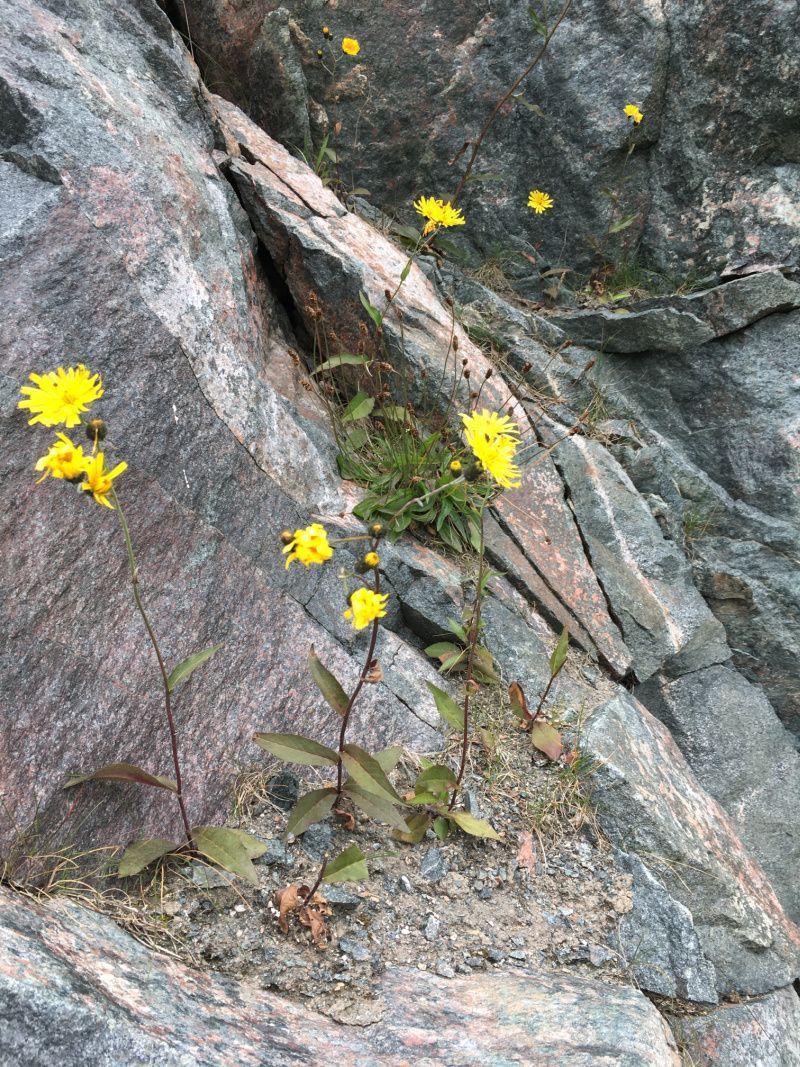 Hieracium hethlandiae is a species of hawkweed native to the Shetland Islands. Although the species was officially considered extinct since its habitat was destroyed 40 years ago, it survived in plant collections and was reintroduced to its rocky home in 2015.
Paul Harvey

This week, H. hethlandiae joins more than a dozen other plants that are officially listed as extinct in national red lists, studies, and other reports, but are apparently still alive and—more or less—well. In a study published March 8 in Nature Plants, researchers tracked down the actual status of 36 officially extinct seed plant species endemic to Europe through a network of scientists across the continent. Thanks to rediscoveries, taxonomic revisions, and survival in botanical gardens, the authors recommend delisting 17 of them.

“Obviously, it’s fantastic news [when] plants are found not to be extinct. But . . . they are still critically endangered,” notes Rafaël Govaerts, a botanist at the Royal Botanic Gardens, Kew, in the UK who wasn’t involved in the study. That said, there is more investigation left to be done about these plants’ sustained existence, he adds. “There’s still a lot of open questions on this.”

The new research began over suspicions that some records of extinct seed plants published in the scientific literature and used in a global 2019 analysis by Govaerts and colleagues were imprecise. Giulia Albani Rocchetti, a plant biologist and PhD student at the University of Roma Tre in Rome, and her colleagues set out to double-check the status of European species with local researchers in different countries, suspecting they may have updates on the taxa. This endeavor was inspired in part by a 2020 report for which researchers had done the same to verify the status of North American plants and questioned the reported extinction of 14 species.

Starting from a list of 36 officially extinct species compiled from national red lists, Govaerts’s study, and other reports, Rocchetti and her colleagues contacted seed banks and botanic gardens to search for evidence that those species were still alive. They also checked records in public data repositories such as the Global Biodiversity Information Facility (GBIF). Remarkably, they learned that four officially extinct species had popped up in the wild again, such as Ligusticum albanicum Jávorska, a member of the celery family that had been rediscovered in Albanian mountains but was listed as extinct in Govaerts’s study.

For seven putatively extinct species, taxonomists now consider them synonyms of living species, the team found. For instance, the thistle-like Centaurea saxatilis (K. Koch) B.D. Jacks. was also believed extinct but is now recognized to be the same as C. raphanina Sm., which is widely found in Greece. Three other species were misidentified in the past, including Nolletia chrysocomoides (Desf.) Cass. in Spain, which should be grouped in with Galatella malacitana Blanca, Gavira & Suár.-Sant. Such taxonomic kerfuffles are not uncommon, Rocchetti says. Because individuals with a species vary, “depending on the original sample of such species, they may be incorrectly identified. Or after [phylogenetic] studies, you find out that this species actually is another species.”

Another extinct plant, Filago neglecta (Soy.-Will.) DC., which belongs to the cottonrose genus, is thought to have died out across Western European countries in the early 1900s. But the team discovered a French herbarium that still has potentially viable seeds. Two other species live in botanic gardens, including H. hethlandiae at the Shetland Amenity Trust’s horticultural unit and Armeria arcuate Welw. ex Boiss. & Reut., a “sea pink” species native to Portugal. Surprisingly, that one was preserved in botanical gardens in Utrecht. “And they didn’t even know that the species was actually extinct in Portugal,” says botanist and conservation biologist Thomas Abeli of the University of Roma Tre who coauthored the study.

A reassessment of the certainty of extinction

To Rocchetti and Abeli, the results highlight that the way species are defined can affect extinction estimates, leading to a slight overestimation. Yet on the whole, these mistakes are probably balanced out by the fact that scientists also underestimate extinction due to the fact that there are likely numerous species that disappear before being discovered, or because there’s not enough evidence to declare a species extinct even after it’s disappeared, Abeli says.

The findings also underline the value of local knowledge to improve the accuracy of extinction assessments, and how outdated some national red lists and similar extinction assessments are, the two authors say. Ideally, there should be better communication between those who craft those lists and researchers on the ground. Citizen scientists also have a role to play, Abeli adds, pointing to reports of one of the rediscovered species, Astragalus nitidiflorus Jiménez Mun. & Pau, on the citizen science platform iNaturalist. “I think that iNaturalist, Pl@ntnet, GBIF—all these big repositories where [lay] people can upload photos—will help to find species that were deemed to be extinct or not seen for a long time,” he says. 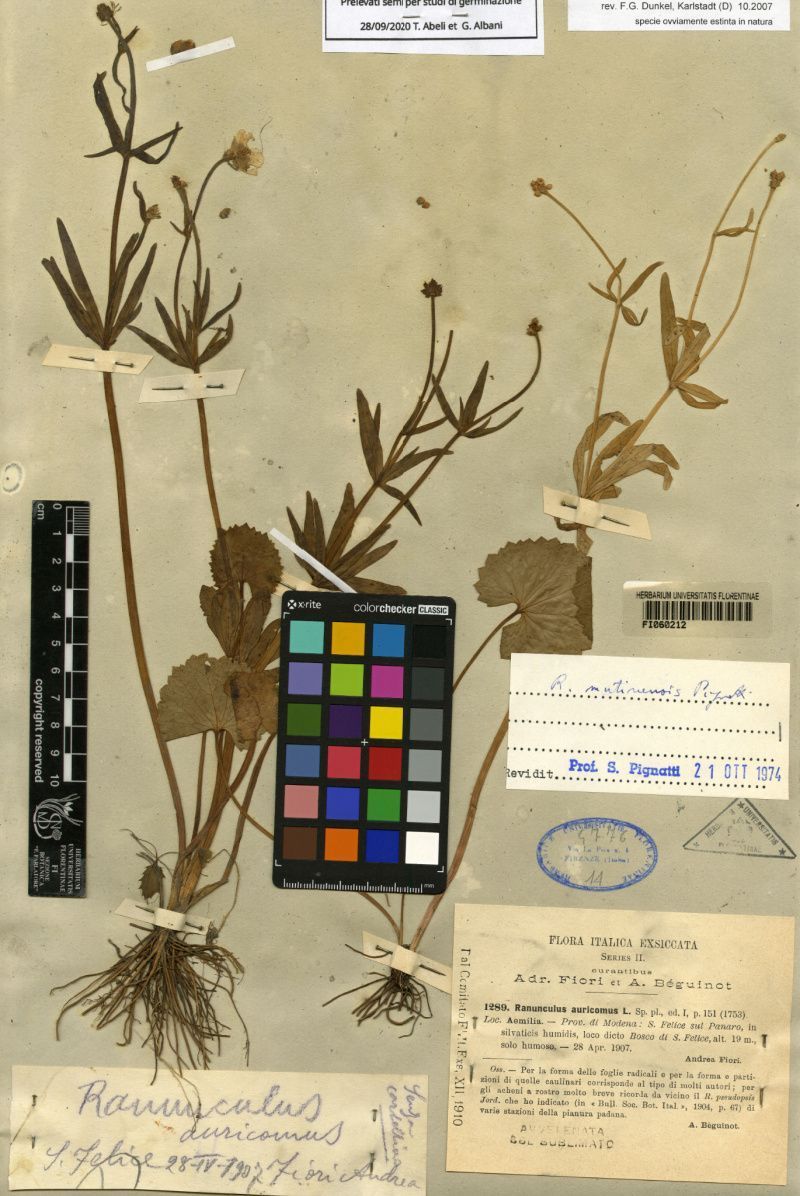 As for the global red list curated by the International Union for the Conservation of Nature (IUCN)—by far the most comprehensive and widely used catalog of species’ conservation statuses—many species in Abeli’s study haven’t yet been assessed there yet, according to David Allen, the regional biodiversity assessment officer of the IUCN’s Red List Unit. The organization doesn’t have the resources to track all extinct or critically endangered taxa, but it has recently been granted a tender by the European Commission to revisit a number of taxonomic groups, including some in the new study. A reassessment of A. nitidiflorus, which the IUCN currently lists as extinct, is underway, “as we found that the species had in fact been rediscovered in the wild,” Allen adds.

Allen agrees with Leopoldo Medina, a botanist who manages the vascular plant collection at the Real Jardín Botánico, part of the Spanish National Research Council, that the findings underscore the importance of trained plant taxonomists in crafting extinction lists. “Large-scale analyses can fail in many cases when treating taxa without proper knowledge of them,” Medina writes in an email to The Scientist. More field work is also needed; even though temperate regions in Western countries are relatively well-studied, “we are far from knowing all the diversity” in these areas, he adds.

The new findings are not a surprise to Govaerts or Medina. Some of Medina’s colleague’s previous research already described the misidentification issue with N. chrysocomoides, and together they reported the rediscoveries of some species in Spain. Govaerts’s global analysis also included some of the rediscoveries, but did not include new, unpublished local knowledge, such as the fact that H. hethlandiae has been reintroduced. “I fully agree that what can be added to our list is unpublished data and local knowledge, but that wasn’t the intention of our paper,” he says.

Comparing the lists in Govaerts’s paper and the new study reveals a handful of other inconsistencies. For instance, missing from Rocchetti and Abeli’s list of extinct plants are two Bromus grass species, which are listed as extinct in the wild in Govaerts’s study, while their list of nonextinct taxa does not include the white-petalled Gibraltar campion Silene tomentosa Otth, which was rediscovered in 1994. Abeli notes that his list is only intended to cover species thought to be extinct but whose delisting has not yet been acknowledged in official lists. Ultimately, both studies come to a similar conclusion, with around half of the species considered extinct not totally lost. On the whole, “rediscovering numbers [remain very] low in relation to extinction numbers,” Medina adds, in part because researchers still don’t have a firm grasp of the extent of pre-Linnean extinctions, before plants were taxonomically categorized.

Govaerts cautions that taxonomy is constantly evolving and the recent revisions may not be set in stone. It’s also not clear if the herbarium seeds—or even the whole-plant specimens—will lead to self-sustaining plant populations.

He adds that delisting is always good news. Beyond the obvious, the problem with declaring something extinct is that species then lose conservation attention and legal protection. Studies like this highlight that extinction listings aren’t necessarily permanent endpoints, but fluid designations. “Extinct means, well, we haven’t found it for a hundred years, but you may turn a different corner and there it suddenly is.”