US keepers of honeybees lost about 38 percent of their colonies over the 2018–19 winter, according to preliminary results from a survey conducted by the Bee Informed Partnership, an organization devoted to understanding honeybee declines. Some winter losses are expected, but this year’s were 7 percentage points higher than last year’s, 9 percentage points above the average of all winter losses since 2006, when the annual survey started, and the highest they’ve been in the survey’s history.

“It’s disconcerting that we’re still seeing elevated losses after over a decade of survey and quite intense work to try to understand and reduce colony loss,” report coauthor Geoffrey Williams, an entomologist at Auburn University in Alabama, tells The Guardian.

The partnership surveyed 47,000 beekeepers across all 50 states who care for an estimated 12 percent of the US’s managed (as opposed to wild) honeybee colonies.

Colony losses for the past year overall, April 2018 to April 2019, were also above average, but not drastically so: This year’s annual losses (41 percent) were 3 percentage points higher than the average annual losses of 38 percent since 2010–2011, when the partnership started keeping track of total annual losses.

Habitat loss, pesticides, Varroa mites—all of these factors contribute to the decline of bee populations. In recent years, the strategies that beekeepers have been using to deter the mites, which parasitize the bees, have not worked as well, Nathalie Steinhauer, the partnership’s science coordinate and a coauthor of the report, tells NPR.

There aren’t enough wild bees to pollinate all crops that depend on bees for pollination, so farmers—and the food supply—rely on commercial beekeepers bringing in honeybee hives to pollinate farmers’ fields, including almonds, cherries, and blueberries. Hive losses therefore pose risks to agriculture.

“If we want to continue to have a food supply that has the variety that we want, we need a movable pollination supply, and those are honeybees,” Dennis vanEngelsdorp, president of the Bee Informed Partnership, study coauthor, and University of Maryland entomologist, tells NPR. “We’re not worried about honeybees going extinct. What we’re worried about is commercial beekeepers going extinct.” 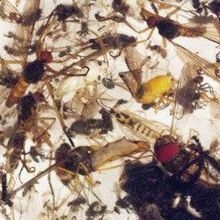