Occasionally, as the nematode worm C. elegans meanders across rotten fruit on the prowl for bacteria to eat, it comes across ones it shouldn’t dine on. Some bacteria are lethal to the animals when ingested, and unfortunately, the worms can’t always distinguish them from the nutritious kind until it’s too late.

Nevertheless, this doesn’t stop them from teaching their young not to make the same mistake, researchers recently realized when watching the nematodes in the lab. Before the animals die from the pathogen, they often lay eggs. These offspring, researchers at Princeton University observed, consistently avoid that particular bacterial species. Evidently, pathogen avoidance—a behavioral habit the mothers learned towards the end of their lifetime—can be transmitted to the next generation, aiding their survival. But it’s not a hard-wired trait; instead, an epigenetic mechanism involving small RNAs appears to be responsible.

That’s the finding of a paper published in Cell yesterday (June 6). Alongside it in the journal, a group at Tel Aviv University also reports on transgenerational inheritance of behavior traits in C. elegans. This team took a different approach, demonstrating how a small RNA–based mechanism allows information from the nervous system to be transmitted to germline cells and into future generations.

While it’s known that traits involved in immunity and stress can be inherited across generations in C. elegans, the two papers are among the first to show that complex behaviors can be transmitted in the same way.

“It’s an exciting push forward and it would be interesting to see if other labs [studying inheritance in other contexts] can repeat this and find similar effects,” remarks Eric Miska, a C. elegans biologist at the Gurdon Institute at the University of Cambridge who wasn’t involved in the research.

Don’t eat that one

Previous research has shown that worms learn to avoid the pathogenic strain of Pseudomonas aeruginosa after being exposed to it. Coleen Murphy’s group at Princeton was surprised to observe those worms’ offspring avoiding the pathogen from the start. Intrigued, she and her team decided to investigate.

They found the worms passed this habit down to their progeny through the fourth generation, after which the behavior faded away. This gave them an edge in survival. When placed on a plate where the pathogen was laid out in patches, the worms whose parents had been exposed to the bacterium had a 77 percent higher survival rate compared to young from naïve, unexposed parents.

It’s been known for quite some time that transgenerational inheritance in worms can be mediated by small RNA pathways, but few have linked the mechanism to a behavioral trait.

To understand the mechanisms at play, the researchers compared the gene-expression profiles of pathogen-exposed worms with those that had only been exposed to a harmless strain of E. coli. They found that a lot of neural genes were upregulated in the exposed parents and their young, including the gene daf-7, which is linked to pathogen avoidance behavior. In fact, after exposing the worms to the pathogen, daf-7 expression increased in a particular subgroup of neurons and stayed at elevated levels for four generations.

Interestingly, disabling daf-7 expression in the parental worms through RNA interference had no effect on their ability to avoid the pathogen, but disabling it in their offspring caused them to lose the behavior. To Murphy, this suggests the gene is required in offspring to maintain the avoidance behavior.

Murphy and her group then investigated how daf-7 is regulated. They first looked for small RNA regulators, a group of short, noncoding sequences that manage genes across many organisms, including mammals, and are thought to play a role in the epigenetic inheritance of various traits in C. elegans. They found a particular class of small RNAs known as Piwi-interacting RNAs (piRNAs)—so named because they form complexes with piwi proteins—whose abundance significantly changed upon exposure to the pathogen. Further experiments suggested that a particular piRNA-associated protein was also required for daf-7 expression in progeny and to avoid the pathogen.

“Our data suggest a model whereby these small RNAs regulate the transgenerational avoidance behavior and the neuronal daf-7 changes underlying it,” writes Murphy in an email to The Scientist. But several details regarding the mechanism are still unclear. How the small RNA pathways translate gene expression changes in neurons to a signal in the germline, and what the piRNAs are doing exactly, she notes.

“It’s a fascinating study,” says Oded Rechavi, a geneticist at Tel Aviv University who led the other study. “It’s interesting that responses to pathogens can be heritable, because we don’t know which environments can trigger heritable responses and which won’t.” One thing he’s curious about is where the process actually occurs. “I am fascinated to know if the response to the pathogens that Murphy is seeing starts in the nervous system, or whether the exposure to the pathogen changes the pool of germline small RNAs directly,” he adds in an email.

From the brain to the gonads to the next generation

Rechavi’s study looked at precisely this question of origins; can responses of the brain to environmental factors throughout an animals’ lifetime be communicated to the germline, and can this be passed on to future generations? “This was the holy grail for us—to see if the nervous system could control the behavior of the next generation,” he says.

His lab’s previous work has focused on another class of small RNA regulators, known as small interfering RNAs (siRNAs), sequences that can silence genes by binding to mRNA transcripts and thus regulate gene expression. These can be inherited through the germline—in addition to the genome—and can alter gene expression across generations. Rechavi and his colleagues have shown that different forms of stress, such as starvation, cause certain siRNAs to be passed down into subsequent generations, where they influence the expression of nutrition-related genes and others.

Rechavi and his colleagues wondered if the same could be the case for neural, behavioral responses that worms learn throughout their lifetime. In that case, could the siRNAs known to exist in the C. elegans nervous system possibly influence gene expression in the germline? To test that idea, they genetically engineered worms to produce RDE-4, a protein required for the synthesis of some siRNAs, only in the animals’ nervous systems. This meant that they would only generate the siRNAs there.

Surprisingly, when the researchers looked in the worms’ gonads, they found that more than 1,000 siRNAs had changed in abundance, compared to control mutants that lacked RDE-4 entirely. Further experiments showed that nearly 200 of these siRNAs are in fact inherited as far as the third generation of offspring. Because RDE-4 isn’t expressed in the gonads in these worms, the result suggested to Rechavi that RDE-4 production and siRNA generation in neural tissues is likely communicated to the germline.

Rechavi’s team also noted that if the worms lacked RDE-4 entirely, they displayed certain defects at warm temperatures; they weren’t as good at finding food through chemotaxis, compared to normal worms. However, a breeding experiment revealed that if the RDE-4–deficient worm strains were crossed with ones whose ancestors had RDE-4 in their neurons, their offspring would have normal chemotaxis behavior. “It’s enough for the great-grandfathers to have RDE-4 in the nervous system for multiple generations down the road . . . to behave almost as well as wildtypes. So the nervous system of the parents controls the great-grandchildren,” Rechavi explains.

Further experiments identified saeg-2, a gene linked to foraging behavior in worms, as one of the genes apparently regulated by the siRNAs. Its silencing is necessary for normal chemotaxis under stress. Rechavi speculates that certain environmental conditions trigger the expression of particular genes that govern behavior in neural tissues, and the animals can pass this on to the next generation by boosting levels of RDE-4, which in turn generates the siRNAs in neural tissues. This somehow results in increased production of siRNAs in the germline, from which they travel into the next generation and downregulate saeg-2 in the progeny to ensure appropriate chemotaxis behavior.

This production of siRNAs is somehow relayed to the germline, but it’s not clear exactly how this occurs, Rechavi says. He speculates that the small RNAs in the neurons could physically travel through tissue into germline cells. This is something that exogenous siRNAs—artificial small RNAs that one can inject or feed to worms—can do, but this has never been shown for endogenous small RNAs.

For him, the results offer evidence against a long-held theory postulated by August Weismann in the 19the century that changes to somatic cells within an individual’s lifetime, such as neuronal responses, cannot be inherited. “The nervous system can transmit responses across generations and breach the Weismann barrier,” Rechavi says.

Miska says the findings lend credence to a study published nearly a decade ago, which was the first to suggest that behavioral traits—in this case, adaptation to olfactory cues—can be inherited across generations in C. elegans. The finding was initially met with skepticism among the scientific community, he says. The new research “support[s] the original concept put forward in the first paper and in addition, they add potential mechanistic insight into how this is happening,” he notes. It’s been known for quite some time that transgenerational inheritance in worms can be mediated by small RNA pathways, but few have linked the mechanism to a behavioral trait.

He’d still like to see more research on the mechanisms. “In neither case is it exactly clear to me how this will work,” he says. For instance, referring to Rechavi’s paper, while it’s known that small RNAs from the nervous system can be inherited through the germline, it’s not clear how they could then go back to affecting gene expression in somatic tissues. As for Murphy’s study, he’s surprised about the involvement of the piRNA pathway, because this is best understood for regulating the expression of “non-self” DNA, such as transposons.

Murphy finds that Rechavi’s study complements her research well. “A lot of times people are only thinking about these components acting in the germline, and [their] study shows—and some of our results also show—there have to be important components . . . in neurons,” she says.

What puzzles her generally, though, is why it would make sense to express a beneficial behavior transiently over a couple of generations, rather than simply hard-wiring it into its genetic code. But it makes sense when considering some results by other groups: when the worms learned to avoid the highly pathogenic Pseudomonas strain, they also tended to avoid less pathogenic strains of the same bacterial species as well. “It would be a bad choice to hard wire avoidance of all Pseudomonas because there’s a lot of Pseudomonas species that are very beneficial to the worms. They can eat them and it’s a good nutritional source,” she says.

Another reason, Rechavi points out, stems from the short generation time of C. elegans. With “just three days until you have the next generation, there’s a relatively high likelihood that the environment of the parent would resemble the environment of the progeny. . . . It could make sense to prepare the progeny and improve the chances of dealing with the same hardship.”

Many of the components of the genes, proteins, and complexes involved in the small RNA pathways are conserved across many animals, including humans. But whether this mechanism of transgenerational inheritance is widely conserved, too, is a “billion dollar” question, Rechavi says. “If this is conserved, then it could really change the way we think about heredity.” 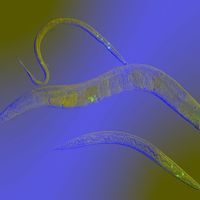 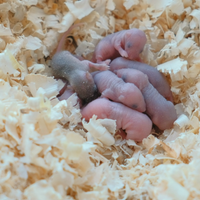