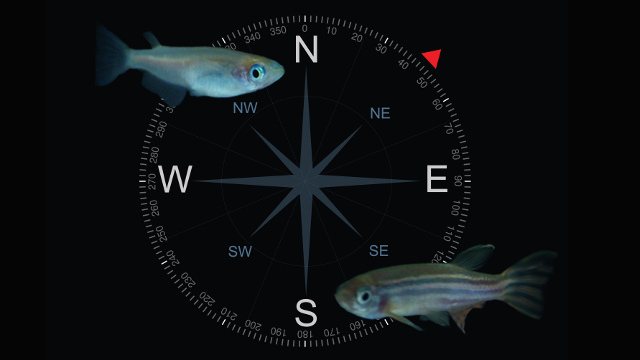 WESTMEYER/HELMHOLTZ ZENTRUM MÜNCHENHumans like to fancy ourselves advanced, but there’s at least one area where cockroaches, and even nematodes, seem to have us beat: magnetoreception, the ability to sense variations in magnetic fields. To add insult to injury, our best human minds haven’t yet been able to answer basic questions about how the sense—also shared by some amphibians, fish, birds, and mammals—works.

Joining the list now are zebrafish and medaka, as researchers reported in Nature Communications last month (February 23). Unlike in some animals, magnetoreception in the fish doesn’t require light to work.

The study is “a promising beginning,” writes Roswitha Wiltschko, a researcher at Goethe University Frankfurt who has studied magnetoreception in birds, in an email to The Scientist. “[T]o demonstrate [sensitivity to magnetic direction] in two species whose genetics are known is novel, and this might form a basis for future investigations.”

Behavioral evidence exists for each mechanism, sometimes in the same species. But uncovering the precise mechanism for the sense, and its path through the brain, has been a challenge.

To make headway on the problem, molecular imaging researcher Gil Westmeyer of the Technical University of Munich and Helmholtz Zentrum München teamed up with Michael Winklhofer, a magnetoreception researcher at Carl von Ossietzky University of Oldenburg, and other colleagues to look for a magnetoreception sense in two model organisms, zebrafish (Danio rerio) and medaka (Oryzias latipes), whose young are transparent.

The researchers set up their experiments in a “completely wooden room” at a remote research facility to avoid interference from electrical lines or anything else that might interfere with a magnetic field, Westmeyer tells The Scientist. The researchers created a field by running electric current through coils placed alongside a circular tank, and then, under white light, switched its orientation by 90 degrees. The change altered the directions in which each individual fish swam and the locations in the tank where they spent the most time.

To see whether the sense was light-independent, the researchers tried the experiment with only infrared light present (the light-dependent mechanism is thought to depend on blue light). The fish’s response was the same. This indicates the two species can sense magnetic field fluctuations without light, though it doesn’t rule out the presence of a separate light-dependent mechanism in fish or other animals, Westmeyer notes.

“The big questions really still remain” about magnetoreception, notes David Keays, a neuroscientist at the Research Institute of Molecular Pathology in Vienna who was not involved in the study. “We still do not understand how animals detect magnetic fields, we still don’t understand where are the primary sensory cells, and we still don’t understand what molecules are required for the magnetic sense. . . . But with this assay, I think [the study’s authors are] well-placed to start addressing some of these.”

Westmeyer says his group’s next step will be to closely observe fish as magnetic fields are changed to try to identify the neural circuits responsible for sensing and responding to that input.

His ambitions go beyond uncovering the biology behind mechanoreception. Once found, he’s hoping to put a similar mechanism to work in neuroscience experimentation—a goal that’s also being pursued by some other groups. Optogenetics, he notes, uses a light-sensitive protein found in nature to make neurons responsive to light, giving researchers control over their activity. Similarly, he’d like to “identify something like that, one gene . . . or a limited set of genes, that are sufficient if introduced into ideally any cell to be responsive to these control signals.” He and collaborators are already taking a bottom-up approach to engineering such a system, but hope to learn from nature’s solution to the problem as well.

Correction (March 19): The original version of this article stated that an experiment was performed in under red light. In fact, it was performed under infrared light. The Scientist regrets the error.